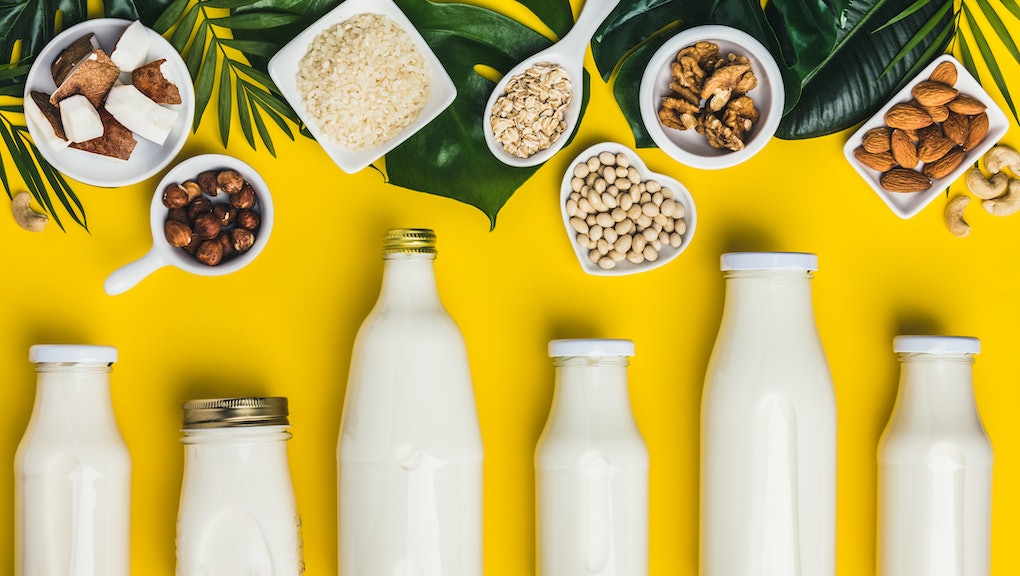 Which non-dairy milks are worth buying?

In the past few years of my mostly vegetarian life, I have witnessed the rise and fall of many non-dairy milks. Recently, the dairy aisle seems cluttered with bespoke artisanal nut creamers and pricey fermented fruit milks. Frankly, the vast array of milks meant to entice me only make me feel incredulous. Pea milk? Banana milk? Really? Must we milk everything? And perhaps most importantly, which of these non-dairy milks are worth buying?

Milk’s effects on your body

Well, it depends on which one we’re talking about — and in 2020, we have choices. “Non-dairy milks can definitely be a healthy alternative to cow’s milk, especially if you have an allergy to lactose,” says Jamie Johnson, a registered dietician in South Carolina. Lactose is an active ingredient in any animal milk and 68% of Americans are at least somewhat intolerant to it. Some of us have a lactose intolerance and don’t even know it, which is good reason for most of us to start re-evaluating our relationship with animal milk if we have one. Sure, lactose intolerance isn’t life threatening, but why deal with the bloating (and other unfortunate symptoms that will remain unnamed) if we don’t have to?

Fat is another reason to avoid animal milks. “Animal milks evolved to feed baby brains — which need quite a lot of fat to develop and grow properly — so you'll typically find relatively high calorie and fat content,” says Stephanie Bostic, a New York-based registered dietician. Infant mammals need saturated fats and they get them through milk, but most adults don’t need any more of it than they’re already getting. Many non-dairy milks are high in the nutrition you do need without the fat you don’t. “Depending on the type of plant-based milk, it can be a great source of calcium and other vitamins and minerals without being high in saturated fat,” Johnson says.

But how do we choose between the buffet of vegan milk options? Well, most dieticians told me, it depends what you need. “If you are using it to get more protein in your diet, soy milk and pea milk will have a good dose of protein whereas almond milk and rice milk will not,” says Johnson. “If you are using plant-based milk as a way of getting calcium, some good options are rice milk, oat milk and pea milk.” Bostic adds that while the nutrition component is really important, you won’t drink something you don’t like, so choose one with a texture that you actually dig.

You’re probably going to have to read the label to choose. Ugh. I know. Who can be bothered? It’s not that daunting, though, if you have a few basic facts. “Look for brands that are fortified with calcium or other nutrients, like B-12, that are found in cow’s milk but missing from non-fortified plant based milks,” says Johnson.

You should also look for milks that have some protein that occurs naturally, Bostic says. She thinks the amount of proteins some companies add to their milks is kind of out of hand. “We're seeing a lot of highly engineered pea-protein-based plant milks, and it's basically a really diluted protein shake,” Bostic says. No shade to protein shakes, it’s just probably not what you need from your creamer.

Milk’s effects on the environment

There are also environmental considerations that come into play when it comes to milk. Animal milks have a sizable carbon footprint. “Producing non-dairy milk is always better for the environment in every way compared to the intensive livestock farming requirements of dairy milk,” says Casper Ohm, marine biologist and editor-in-chief at Water-Pollution.org.uk, a website dedicated to raising awareness of threats posed by man-made pollution to our environment. But this is another way that not all non-dairy milks are created equal — or equally beneficial, I should say.

I may poke a little fun at artisanal foodie products, but the truth is that a lot of the time the people who make them are really trying to make something that’s better for the world than dairy farming. “I began experimenting with bananas because most Americans like bananas,” Jeff Richards, CEO of Mooala and creator of Bananamilk, tells me. “That makes bananas an inexpensive ingredient for drinks.” Richards tells me that it’s really hard to make a certified organic product at a reasonable price point, but because bananas themselves are inexpensive, unlike say, cashews, his company could afford to make an organic product that’s recognized as such. The result was the creation of banana milk.

Environmentally, Ohm asserts that oat milk is the least damaging non-dairy milk choice when you factor in total carbon emissions and how much water is needed to produce it. For context, he compares oat milk with almond milk. “The main difference between oat milk and almond,” Ohm says, “is that almond is incredibly water-intensive, with a much higher environmental cost associated with producing it. Almond milk is sustainable only when it's produced in areas of the world where there is water in abundance, or else it can ruin entire ecosystems to divert water for creating almond farms.” So, then, easy on the almond milk lattes unless you live in a rainforest.

What’s best for the earth may also be good for our bodies. Oat milk is a relative newcomer to the field, but some nutritionists love it. “Oat milk is also fortified with calcium and vitamin D making it beneficial for bone health. Oats are naturally high in fiber which means oat milk provides excellent heart health benefits,” Trista Best, a Georgia-based registered dietician, tells me. One drawback of oat milk, Best says, is that even though oats are naturally gluten free, oat milk is often processed in facilities that also produce — gasp — glutinous foods, so purists — and folks with legitimate gluten-centric health concerns like celiac disease — may not consider it to be truly gluten free.

Honestly, I will still probably continue my practice of buying whatever has good packaging and is also on sale, but I’m definitely taking a closer look at my nut milk labels from now on.

More like this
The benefits of rose tea, explained
By Tracey Anne Duncan
Your smaller pandemic friend group is actually a good thing
By Joseph Lamour
An ode to quarantine meals that got us through the pandemic
By Melissa Pandika
Stay up to date