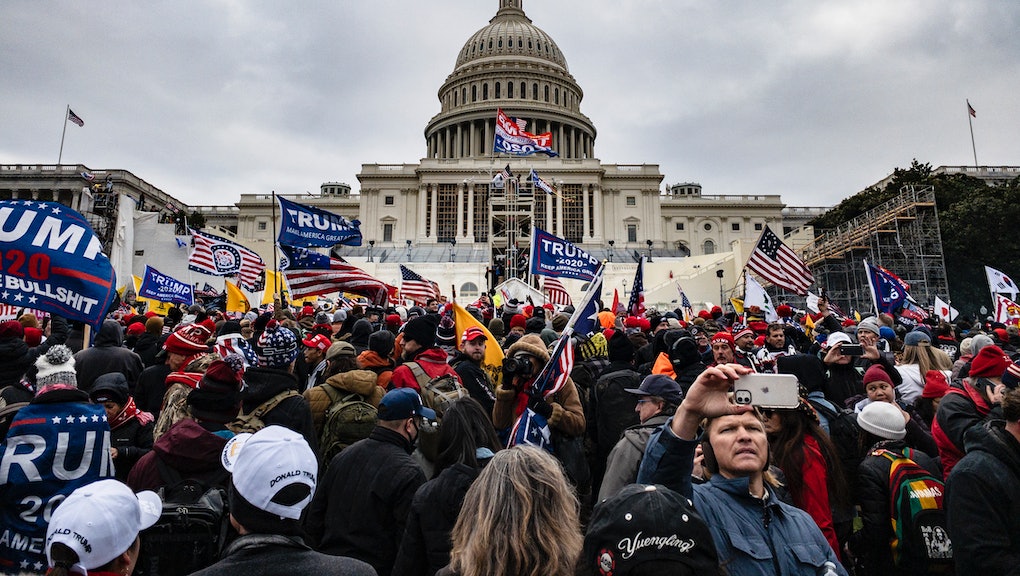 Yesterday, the U.S. was logged the deadliest day of the pandemic as all eyes were on the maskless violent mob storming the Capitol. The violence provoked by 45 starkly overshadowed the dangerous reality of COVID-19, The Washington Post reported. Yesterday will go down in history for so many reasons that it’s easy to lose sight of critical connections. Here’s what you need to know about the enormous surge in coronavirus cases we didn’t notice because the outgoing President was busy egging on his white supremacist supporters.

Over 3,900 people died of COVID-19 in the U.S. yesterday, and 251,646 new coronavirus cases were reported, which is about 16,000 more cases than Wednesday of last week, according to The Post. 132,000 Americans are currently battling coronavirus infections in hospitals, according to The Post, and this morning, the World Health Organization (WHO) warned that the world has reached a dangerous tipping point.

Things are particularly bad in California, where 459 new cases were reported yesterday. Hospitals there are already seriously overburdened and health care services are being rationed in Los Angeles County. California Governor Gavin Newsom was scheduled to give a COVID-19 briefing on Wednesday afternoon, but it was canceled due to the unrest in Washington and simultaneous illegal “protests” staged by Trump supporters in Los Angeles and Sacramento, according to The Los Angeles Times.

Several members of Congress have tested positive, recently. Some are currently in quarantine, but newly elected Kansas Congressman Jake LaTurner tested positive after voting on the floor during last night’s late night session, The Washington Post reported. That means that a sick and contagious man was forced to put even more lives at risk — through prolonged contact with an infected person — due to the delay caused by the far right rioters. Pennsylvania Representative Susan Wild described the holding situation that lawmakers were forced to evacuate into “a superspreader event,” CBS reported.

And, while it’s probably already obvious from the terrifying photo montages we’ve all seen by now, most of the angry mob was maskless. Their treasonous actions weren’t just a dangerous threat to democracy, then, they also put the lives of politicians, cops, and therefore millions of other Americans at risk with their careless willingness to spread infection at a moment in which more people in this country are dying than ever.

This is, unfortunately, not surprising, as many recent far right actions have been explicitly anti-mask, and some participants have actively encouraged the creation of super spreader events. In contrast, it’s worth noting that not only were this summer’s Black Lives Matter protests legally organized and masked, they also have been shown not to have contributed to the spread of COVID-19, unlike, say, Trump rallies.