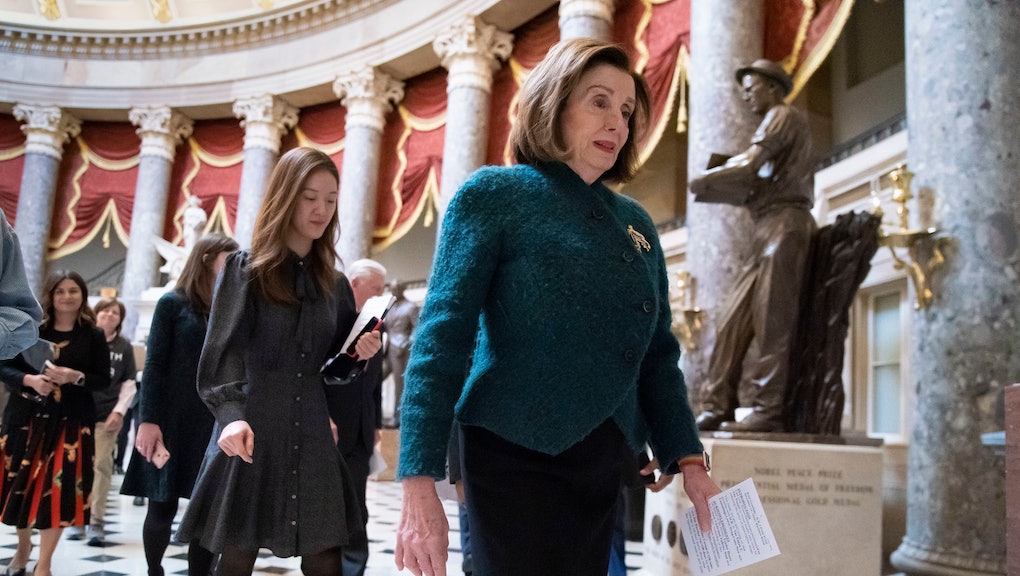 Even as impeachment rages toward a climactic vote in the House, President Trump and Democrats are working together on a variety of bipartisan policy goals. On Tuesday, House Speaker Nancy Pelosi announced that Democrats had reached an agreement with the White House on President Trump’s updated version of the North American Free Trade Agreement between the United States, Mexico, and Canada, now known as the U.S.-Mexico-Canada Agreement. The new legislation includes stronger protections for organized labor, as well as enforcement of environmental and pharmaceutical regulations that were not in the initial draft of the bill proposed to Democrats. The deal comes after Democrats pushed for these key priorities to be included, allowing Pelosi to claim “victory for the American worker.”

Still, it can be strange to see such cooperation between the parties in this day and age — and especially as Democrats devote large amounts of time, effort, and media energy to impeaching the same president they just struck a deal with. Democrats have now given Trump a win to tout; the trade agreement has been one of the biggest legislative priorities of his term in office. The New York Times pointed out that Pelosi announced the trade agreement in a press conference that immediately followed her announcement that Democrats had narrowed down two articles of impeachment.

Trump himself appears aware of the irony. At a rally in Pennsylvania, he said that Pelosi agreed to the deal now in order to “smother the impeachment crap.”

“We’ve been waiting a long time for Nancy Pelosi to announce USMCA,” he said Tuesday night in Hershey, Pennsylvania. “And she did it on the same day that they announced that they are going to impeach the 45th president of the United States, and your favorite president.”

Pelosi denied that the timing is puzzling, instead painting the move as righteous politicians doing the right thing. “Not any one of us is important enough to hold up a trade agreement that is important for American workers,” she said.

Looming over these negotiations is the specter of the 2020 campaign. Both parties want to be able to point to accomplishments on the campaign trail. Democrats are trying to fend off accusations that they’ve devoted their energy to attacking Trump and nothing else, and they’re also trying to position themselves as the party of unions in order to compete in key blue-collar areas in the Midwest. The massive AFL-CIO labor organization endorsed the updated version of the USMCA, which included protections for organized labor in Mexico. Meanwhile Trump, whose agenda has largely been stymied in courts and by Democratic control of the House, needed a big win to give his supporters something to rally around. All the better if he can claim the win came out of Pelosi's desperation.

Still, the final version of the USMCA contains enough for both Republicans and Democrats to campaign on. Robert Lighthizer, Trump’s trade negotiator, said that it was “nothing short of a miracle that we have all come together.”

Trade isn’t the only area where Democrats are moving forward on Trump’s legislative priorities. Democrats are currently working on a bill to allow the government to directly negotiate drug prices for Medicare in an effort to lower costs, which is something Trump has often discussed. “We’re going to save so much money and those drug companies are going to hate me so much,” he said at a 2016 campaign rally. Still, according to NBC News, Senate Majority Leader Mitch McConnell is unlikely to bring the bill up for a vote in the upper chamber because it’s a partisan Democratic proposal. But there’s no denying it's based on a bipartisan cause.

Furthermore, Democrats and Republicans on the House Armed Services Committee have announced a $738 billion military spending bill for the coming year, which would increase spending by $22 billion from 2019. The bill would officially create the Space Force, another priority that Trump has enthusiastically pushed for.

Prominent progressives have criticized the compromise version of the defense bill, noting that it does not include the restrictions on selling arms to Saudi Arabia that some left-wing congressmen had mandated. “There is no pressing reason for Congress to shower Trump, his Saudi friends, and the Pentagon contractors of the military-industrial complex with this $738 billion taxpayer giveaway right now,” said Vermont Sen. Bernie Sanders and California Rep. Ro Khanna in a joint statement. “We owe it to the American people to go back to the drawing board.”

There’s yet another compromise issue moving forward, too, though it’s not without controversy either. Late Tuesday, it was reported that Trump planned to sign an executive order declaring that Judaism is both a nationality and a religion, in a move ostensibly aimed at curbing anti-Semitic speech on college campuses.

The recategorization of Judaism as a nationality would allow the government, under Title VI of the 1964 Civil Rights Act, to withhold federal funds from campuses where it determines that Jews are being discriminated against on the basis of nationality. The stated intent is to combat anti-Semitism, particularly as it relates to efforts like the Boycott, Divestment, and Sanctions movement. But progressive Jewish groups and free speech groups alike have attacked the executive order, arguing that criticism of Israel is political speech, not hate speech.

"This executive order, like the stalled congressional legislation it is based on, appears designed less to combat anti-Semitism than to have a chilling effect on free speech and to crack down on campus critics of Israel," wrote Jeremy Ben-Ami, president of the progressive Jewish group J Street, in a statement.

The executive order is based on bipartisan legislation proposed by Democrats and Republicans in 2016. Democratic Rep. Ted Deutch (Fla.), who co-sponsored the original bill, wrote an op-ed last week arguing in favor of the change, claiming it “was drafted not to regulate free speech or punish people for expressing their beliefs,” but instead to “serve as an important tool to guide our government’s response to anti-Semitism.”

Taken together, the trade, drug pricing, military spending, and anti-Semitism initiatives show that while impeachment may be sucking up a lot of oxygen, Democrats and Republicans are by no means out of step on everything. There’s one big thing they have in common now: a looming election. With political scrutiny at an all-time high, both parties are eager to notch some wins that they can point to in the coming campaign.

That way, they’ll have the best chance to take down those suckers across the aisle next fall.