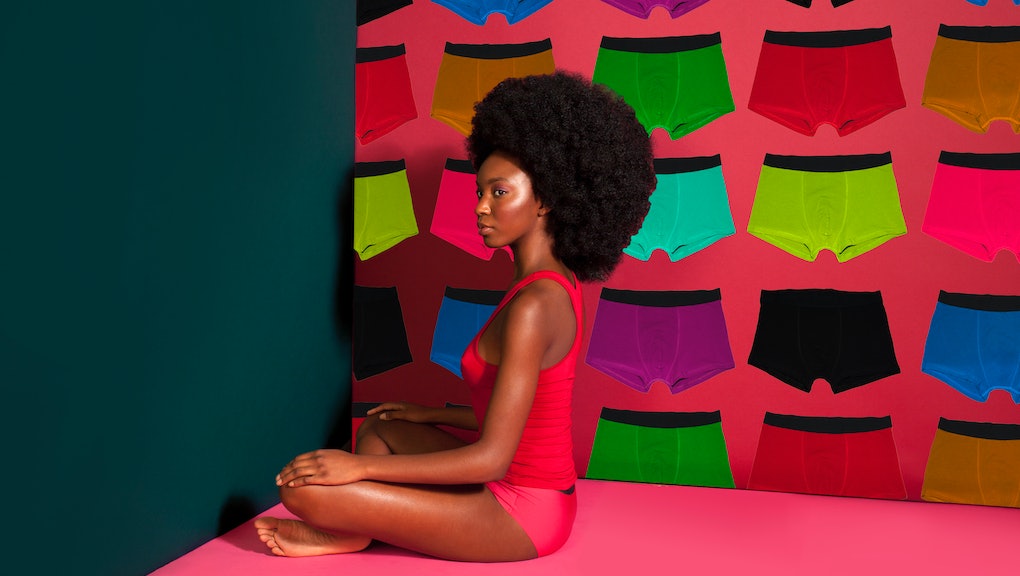 Why are we still gender-policing underwear?

Although I am Black and gay, I’m still a cisgender man, and that comes with its own set of privileges. It wasn’t until I was a senior in high school that I noticed how strictly the boundaries of gender are policed in our world — even for a cis man growing up in a liberal state. Back then, I took a trip to France with my art class, and in addition to standing in the same room that Beyoncé would years later for her Parisian masterpiece of a music video (the Mona Lisa was there as well, which was fine) and climbing the Eiffel tower, we shopped the boutiques surrounding the Champs Élysées. My favorite purchase was a sleeveless, white, sheer silk top that had a large stemmed rose delicately embroidered on its side.

I thought I looked great in it, and though I knew it looked like lingerie (and maybe was?) I felt that it gave me a sort of David Bowie-by-way-of-Sisqo superstar vibe that would have made me a fashion king at school. I also knew it made me look somewhere other than straight on the spectrum, even though by then, I was out to everyone I knew. When I flew back to the States and home to my religious Haitian American household, I showed my parents my European haul, which included figurines, a sketchbook full of charcoal drawings, a pair of shoes worthy of an *NSYNC music video, and the aforementioned shirt. When I showed them the top, my mother took one look at it and made me throw it in the trash.

I’ve since forgiven my mom for her actions, and looking back, she was just reacting to the world she grew up in, fearing the implications of her son wearing feminine clothing. And, since that moment, I continued to test my parents’ — and the world’s — temperance with a series of fashion risks: hot pinks and rich purples, patterns, glittery tops, and ultra-short bottoms. But, one type of clothing I’ve never experimented with again is lingerie or underwear.

I still wear the same steady stream of C-IN2, AussieBum, and Diesel boxer briefs that seem to signal a desire to be masculine even in my most intimate moments. Each brand reinforces the gender binary — the images on their sights behold rock hard man abs and perfectly coiffed Disney prince hair. That makes me feel like my underwear drawer — and the market itself — is ripe for a revolution.

First, for those folks who might think that there’s nothing wrong with gendering underwear, science would like a word with you. A 2017 study in the Journal of Adolescent Health found that around the world, gender roles and expectations contribute to health disparities that affect us all from infancy onward. In North America, the reinforcement of the gender binary is particularly prescient, and discrimination follows women, trans people, and non-binary folks into the workplace, dating, and even health and medical care. Even for those who identify as men, the strict policing of gender stereotypes shows up in countless enlightening and frustrating ways, including in regards to our skivvies.

For instance, it took until August of 2019 for Victoria’s Secret to cast a single trans model, years after Jean Paul Gaultier, Marc Jacobs, French Vogue, and many others did. Part of the delay was controversial executive and marketing lead for VS Ed Razek, who publicly (and privately) expressed some pretty antiquated and misogynistic views on gender. I won’t quote him, but essentially, a lifetime of thinking about gender as a two-party system led to a now-unmarketable view on trans people and gender in general, which seemingly bled into his friendships, too.

You might think that Victoria’s Secret and its controversies are just a part of an underwear company’s evolution through time, but it’s also a microcosm of how gender is policed in American fashion. A magazine cover featuring trans model Andrej Pejic was once censored in Barnes and Noble stores with an opaque sleeve because she was topless and in rollers — even though she identified as non-binary at the time. The bookseller likely presumed people would misinterpret the then male-presenting model as a topless woman, and — I don’t know — faint? But regardless of the potential backlash of a topless woman on newsstands, we return to the age-old question: What’s so scandalous about breasts, America?

When it comes to undergarments, the harmful myopia of the gender binary is reinforced by companies who only sell “men’s underwear” like C-IN2, or only sell “women’s underwear,” like Victoria's Secret. There are even some companies, like Canadian underwear company (and personal fave) Ginch Gonch, which are cheeky and free, yet still adhere to a gender binary in some ways.

It seems impossible to cut through the noise of a bunch of Victoria’s Secret models swaying around to Maroon 5 in branded undergarments, but, thankfully a few designers already have. More and more underwear brands are doing away with the concept of gender and it’s trappings altogether. New York-based underwear brand BoiPKG doesn't mark the gender of anything, which is what makes it and companies like it such as Tomboy X so revolutionary.

“I saw the void,” says Shareef Hadid Jenkins, founder of BoiPKG to Mic. “There have been binary companies that show trans men and nonbinary persons on their social media feed but when you go to their website its completely binary.” They’re right — for example, though period underwear brand Thinx premiered a viral campaign featuring trans hottie and male model Sawyer DeVuyst in 2016, once you go to their website today, there appear to be just cis woman models in cis women-like undwear.

“I’ve followed Tomboy X and saw how they have helped fill the gender neutral void in the market but I felt it skewed on the femme side, so I wanted to create non-binary gender neutral masculine-leaning brand, that still catered to all genders,” Jenkins continued. “That led our brand to what we have become and always were: Queer.”

Before Louis M. Dorantes came up with gender fluid underwear brand Leak Your Sex Tape, the designer initially devoted their time to exploring their queer identity for one, by sketching erotic images. That led to the idea of expressing their sexuality in public spaces. “I then began going to raves and queer spaces in Brooklyn, wearing pieces I made,” Dorantes tells Mic. “LYST became a natural incubator to collect and grow queer creative energy after my friends starting wearing my pieces too.” LYST makes sexy bespoke undergarments, including corsets with facets and embroidered details for any gender. Dorantes’ pieces read as a statement of what underwear — and fashion — could be.

“I’ve learned so much along the way from my queer friends who are pole artists, dancers, photographers, and party organizers,” Dorantes said. “My clothes have a lot of straps and bodycon fits, meaning they need confident bodies to thrive or they fall flat, quite literally. I’m driven to grow my company by all the queer personalities that are thriving and colorful and gender fluid.” That confidence comes easily for some, but for others, it’s hard fought. Which is why companies like LYST and BoiPKG are here to cut through all that gendered noise.

“If you look at the social media of places like CN2, Marco Marco, and Victoria’s Secret, you understand why they push the status quo, it makes them money and socially accepted sexualized models sells,” Jenkins says. “But we know that the world is filled with a large spectrum of people that BoiPKG strives to have see themselves.” Jenkins adds that they create gender affirming underwear including those with pouches for packers and mixing the masculine and feminine aesthetics in one product.

“I want to improve the industry by committing to my craftsmanship and by building a brand that’s evironmentally low impact, queer run, and accessible to people who are passionate about gender non-conforming fashion,” Dorantes adds.

Though a Tumblr and a section on Reddit poke fun at the more absurdly gendered items we find in stores in America and around the world, in the end it’s no laughing matter. Underwear is called "intimates" for a reason: They’re the closest thing to our bodies most of the time. And every single body deserves to feel good, no matter their gender.

More like this
How to support Black and Asian American friends without exhausting them even more
By Melissa Pandika
Why some vaccinated people are still wearing masks outside
By Tracey Anne Duncan
How to feel sexy again, according to a therapist
By Melissa Pandika
Stay up to date