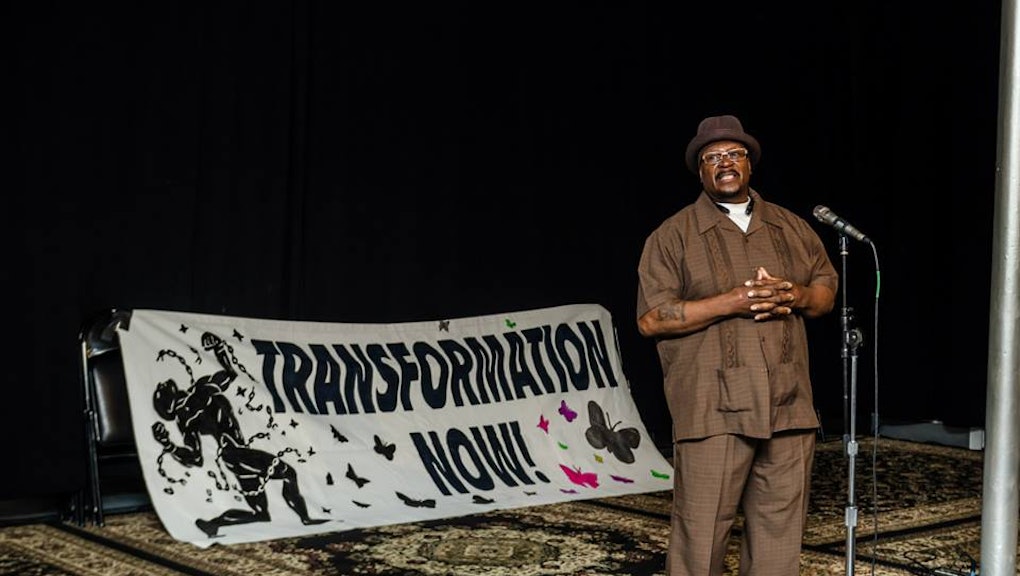 Why Chicago needs a memorial to Jon Burge's torture victims

Wearing a dapper broad-brimmed hat and sitting in the comfortable clutter of the Chicago Torture Justice Center on the city's South Side, Anthony Holmes's voice is incongruously quiet and calm as he describes being tortured by former Chicago Police Department commander Jon Burge almost 50 years ago. "The bottom line was he wanted me to confess to murders I didn't do," Holmes told me.

Holmes says that Burge and his men connected electrodes to his body and shocked him; that they put a plastic bag over his head so he couldn't breathe. The torture lasted for 20 hours or more, Holmes says. "Quite a few times I thought I was dead. He tortured me. He broke me. And I told him whatever he wanted. I said, you want me to say I killed the president, I'll say I killed the president."

Holmes spent 30 years in prison as a result of his forced confession. And he wasn’t alone in this fate. Burge and CPD officers under his command are thought to have tortured more than 200 Black men between 1972 and 1991 to force confessions. In addition to lasting trauma from the torture, many of Burge’s victims were sent to prison for decades for crimes they didn’t commit. More than 30 police officers, including detectives and supervisors, were implicated in the torture. So was then-state’s attorney Richard M. Daley, who later became Chicago’s mayor.

Activists are now pushing the city of Chicago to erect a memorial to Burge's victims as part of the reparations bill it passed exactly five years ago, on May 6, 2015. The package originally called for cash payments to survivors, but it also provided for more: a curriculum for Chicago schools teaching about the city's police torture, funds for the Chicago Torture Justice Center, a community center for police torture survivors that offers access to wellness services and trauma-informed assistance. Finally, it provided for the construction of a memorial.

The memorial holds particular importance for survivors. It's a way for the city to show Holmes and those like him that their stories are believed. It also underlines that justice requires not just recompense, but acknowledgment and understanding. After all, as Holmes says, "The sad part was when I was trying to tell people what happened, nobody believed me.”

Public discussions of reparations for slavery and racism nationally, like in Ta-Nehisi Coates's famous Atlantic article "The Case for Reparations,” tend to focus on financial restitution. Money is certainly important, but Holmes says that for him, recognition is equally vital. That’s why reparations mean so much to him, he says: "because it shows that [the police] lied.”

Joey Mogul, a civil rights attorney who represented torture survivors, and one of the organizers of the Chicago Torture Justice Memorials Project (CTJM), was adamant about the need for a broad approach to reparations. "Reparations is looking at really trying to make people whole for the harm they suffered. And it has an understanding that it's not just individuals who may have been directly impacted, but their families and communities as well."

The ordinance didn't specify exactly what the memorial should be, and CTJM has spent the past few years soliciting designs in consultation with survivors and affected communities. Rahm Emanuel, the Democratic mayor of Chicago at the time, had to be pressured into supporting the reparations bill, and once it passed he was not very supportive or encouraging in getting the job done, says Sarah Ross, an artist and educator and member of CTJM.

Ross tells Mic that the city, at one point, proposed dedicating a single park bench to torture survivors. "That was offensive," she says flatly. Emanuel stepped down as mayor in 2019, and CTJM is now in talks with the new Democratic mayor, Lori Lightfoot, and her administration.

One of the things both Mogul and Ross emphasize is that the memorial is part of the whole reparations package. The school curriculum that teaches the history of police torture in the city encourages students to imagine what a memorial to the survivors would look like. To have students imagine their own memorial, and then be able to visit an actual site, would be valuable in making the history feel real to a new generation of Chicagoans.

"We're still messed up. It's like coming home from Vietnam. The anxiety is indescribable."

A memorial is also important, Ross says, because police violence in Chicago is ongoing. Seventeen-year-old Laquan McDonald was shot in the back by police officer Jason Van Dyke in 2014, provoking city-wide outrage. Other instances of police brutality occur regularly. So the memorial wouldn’t commemorate a trauma or an injustice that has ended. Rather, Ross explains, it would be a reminder for those who are still targeted of the resilience of their peers.

“It shows that the community didn't just take it,” she says. “People organized and worked towards justice." The memorial wouldn’t just be about injustice overcome — it would be about providing inspiration for an ongoing resistance.

For this reason, Patricia Nguyen and John Lee, the Chicago artists whose proposal was chosen for the memorial, tell Mic that they didn't want a static or frozen design. "Traditional memorials trap time," Nguyen says. "The state just gives a memorial to a historical event and says that it already is recognized and dealt with. But we wanted to think about the fact that violence has continued to happen." The memorial is for its visitors, the designers say — people who are themselves facing police violence and state brutality every day.

The design that they landed on was a "monumental anti-monument," according to Lee. The memorial will consist of a large spiraled concrete shell, which visitors can walk into. Survivors were unanimous in saying that the memorial should include the names of those Burge tortured, so the first thing visitors will see is a list of names on the wall. There will also be room for more names, if other survivors are discovered or come forward.

Further inside, there will be a timeline of the torture and of the efforts to hold Burge accountable, including investigations, lawsuits brought by survivors, and charges against Burge. Then there will be a designated community space, where people can gather for talks or activities, or even cookouts.

Finally, at the end there will be statements, hopes, dreams, and writing from torture survivors etched on the wall. "So many of the survivors were forced to confess to things they never committed," Nguyen says. That’s why it was important to include their own words in the memorial — the truths they wanted to speak, but which Burge and his men used violence to silence.

"Memorials are so important as part of reparations because it actually speaks to the limitations of the law," Nguyen explains. There's no way to fully pay Holmes back for the 30 years he spent in prison under false pretenses, and no way to pay back the people whom Burge tortured who never came forward. A memorial, though, "still honors their life," Nguyen says.

As my conversation with Holmes winds down, he gestures around at the Chicago Torture Justice Center, which the reparations ordinance had brought into being. "This is what helps us," he says. "This is where someone can come to talk to us and understand what's going on with us. Because we're still messed up. It's like coming home from Vietnam. The anxiety is indescribable. I wake up in cold sweats. I still feel like 1,000 needles going through my body at the same time." Holmes was recently found to have heart damage; his doctor said it was from the electrical shocks Burge gave him.

What was done to Holmes can't be undone. But being believed and honored is a step toward healing. He speaks, with obvious pride, of the standing ovation he received when he went to City Hall and testified about what had happened to him.

Today, many communities are engaged in an ongoing struggle to remove monuments to racist Confederate soldiers or to include incidents of egregious racist violence in school curricula. Activists in Chicago have in part been fighting to show that these struggles are all connected to a broad understanding of reparations. After all, we need to remember, commemorate, and make restitution for past atrocities if we are going to acknowledge and rectify current ones.

More like this
Jailhouse lawyer Johnnie Cook is fighting for pandemic justice
By Mai Tran
With this new bill, North Carolina is again at the forefront of the GOP's anti-trans push
By Rafi Schwartz
The GOP's anti-trans crusade is ramping up — and explicitly targeting kids
By Vanessa Taylor
Stay up to date