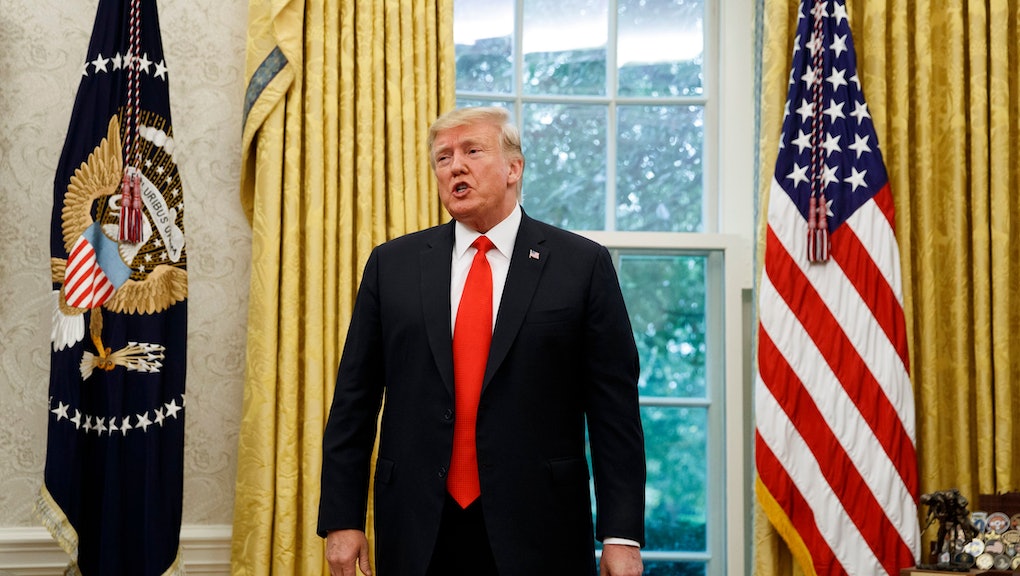 Why Chrissy Teigen, John Legend, and Donald Trump are fighting on Twitter

Usually, Sunday is a day to prep for the rest of the week. Do a facemask, plot out your to-do list, watch Succession. Chill out, you know? Unfortunately, the President didn’t do any of that. Instead, while boasting about his instrumental role in addressing criminal justice reform, he decided to target famous celebrities for not giving him enough credit for the work he’s done. Over the course of four tweets, Trump condemned CNN’s Van Jones, NBC’s Lester Holt, as well as John Legend and Chrissy Teigen for stealing the praise intended for Trump himself.

Jones, Holt, Legend, and Teigen have all been outspoken in their support of criminal justice reform. Holt recently aired a special on Angola State Prison in Louisiana, which is widely regarded as one of the worst prisons in the country. Legend and Teigen have been a part of numerous initiatives to raise awareness about criminal justice reforms – and Legend particularly has been active in local and state-level actions addressing the effects of mass incarceration.

Trump passed a bill in December 2018 called the First Step Act, which reduced mandatory minimums and allowed for nearly 31,000 people to be released from prison, with the longer-term goal of reducing recidivism. It was an important first step. But the scope of American incarceration is much wider than a single reform bill and means little coming from a president who is expanding other forms of detention, for immigrants and asylum seekers, and who routinely spouts racist rhetoric against the very groups who are disproportionately affected by mass incarceration. Even his decision to target four people of color (again) when discussing the matter point to Trump’s insincerity.

Writing about Teigen, he referred to her only as Legend’s “filthy mouthed wife,” and in the same tweet complained that Holt didn’t reference “the subject of President Trump or the Republicans” in his NBC special. Yes, the president did refer to himself in the third person, and yes it was only the third most unsettling part of his thread.

Holt and Jones didn't respond to the president’s tweets. But Teigen and Legend had their fun, even with Trump’s supporters filling their mentions. Living up to the jab, Teigen wrote “lol what a pussy ass bitch. tagged everyone but me. an honor, mister president.” She also revealed that while the president was directing online hate her way, she was prepping for her daughter’s first day of pre-school. Soon the hashtag #PresidentPussyAssBitch began circulating on Twitter.

Legend decided to respond in kind, asking Melania Trump to give the president the attention Trump clearly desired. “Imagine being president of a whole country and spending your Sunday night hate-watching MSNBC hoping somebody--ANYBODY--will praise you,” Legend wrote. “Melania, please praise this man. He needs you.”

Twitter, for their part, decided that the hashtag #PresidentPussyAssBitch violated their terms and conditions, and wouldn’t feature it in their trending topics.

The president has not responded to the backlash about his tweets, though he did begin Monday morning by tweeting that CNN is bad for the country and that MSNBC is even worse — once again directing more hate towards the two media outlets. His most recent tweets are claiming that he has nothing to do with a U.S. Airforce corruption scandal involving a luxury Trump resort. So, it looks like the week is off to a good start.

More like this
This restaurant's viral anti-vax stance is a sad, predictable sign of our culture wars
By Brandon Yu
Dua Lipa has officially distanced herself from DaBaby
By Kara Weisenstein
A #MeToo’d Ryan Adams made his bed and now seems pretty uncomfortable in it
By Chloe Stillwell
Stay up to date