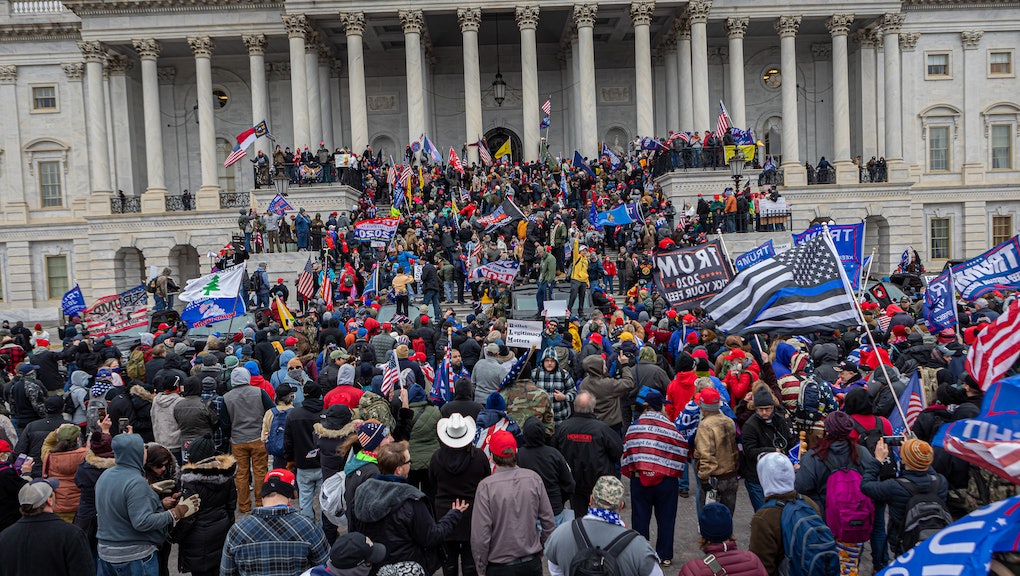 Why did the police go so easy on pro-Trump extremists?

On Wednesday, hoards of white supremacists and supporters of President Trump stormed the United States Capitol following Trump's horrifying speech at a "Stop the Steal" rally in Washington, D.C. During his speech, Trump promised to lead the crowd to the Capitol. While he instead returned to the White House, that didn't stop supporters from flooding Capitol Hill and quickly breaching security.

It didn't take long for Twitter to become overrun with images of people chasing Capitol police, breaching the Senate chamber, raiding representatives' offices, the Senate Parliamentarian's office, and more. The presence of the mob prompted a lockdown of the whole of Capitol Hill. And while law enforcement eventually cleared everyone out, many could not help but notice the stark contrast in police response to the white supremacists on Capitol Hill compared to the response to Black-led protests throughout the summer.

Anyone who lives in or has visited Washington, D.C., knows just how policed the city is. Per the United States Capitol Police's own website, the USCP has over 2,300 officers and civilian employees and an annual budget of about $460 million. Along with USCP, there's the Metropolitan Police Department, which covers the city at large, as well as federal agencies. And following the police killing of George Floyd, agencies in D.C. made sure to showcase just how much harm they could cause protesters demanding police abolition.

Notably, federal law enforcement utilized tear gas, pepper spray, rubber bullets, and flash bombs to clear Lafayette Square of peaceful protesters so that Trump could have a photo-op at a church. And yet, the white supremacists who stormed the Capitol were hardly met with the same energy. In fact, videos of Capitol police seemingly allowing people through the barricades and taking selfies with white supremacists prompted a series of tweets joking about the lack of security. In one video, an officer is seen escorting a woman wearing a Trump beanie down the steps of the Capitol.

Beneath the jokes, though, there is real concern, pain, and frustration. While law enforcement was present at the Capitol, in riot gear and with weapons drawn, many people pointed out that, if the crowd had not been full of Trump supporters but instead comprised of people of color protesting for justice, history suggests they would have been immediately met with violence and aggression at the barricades. There would have been no option to breach the Capitol; there would have simply been a massacre.

Some members of Congress have similarly expressed concerns regarding Capitol police's actions. Rep. Ilhan Omar (D-Minn.), who is now drafting articles of impeachment against Trump due to Wednesday's events, tweeted, "U.S. Capitol security failures need to be fully investigated. We spend billions of dollars on national security and today failed to protect our Nation’s Capital from a lawless mob. Unacceptable!"

Rep. Jim Cooper (D-Tenn.) told WUSA9, "It's one thing to be friendly and to de-escalate the violence. But it's one thing to take selfies with [rioters] and let them go through the lines." When asked directly if he thought Capitol police were complicit, he said, "At best they were overwhelmed and did not anticipate what they had been warned of by Trump, even as of this morning when he said he would join the protests at the Capitol. ... At worst, they let this protest proceed unlike any other."

However, MSNBC's Joe Scarborough, a former Republican congressman, did not hold back. "I wanna know from the Capitol Hill police, what is it? Is it just white people? Or is it Donald Trump supporters?" Scarborough said live on air Thursday morning. "Why do you scream at people for walking across the street, three blocks away from the Capitol? Why are you known as badasses around the Capitol, but then Trump supporters come in and you open the fucking doors for them, you open the doors for them and let them breach the people’s house? What is wrong with you?”

Following the police killing of Floyd in Minneapolis, protesters were met with militarized police utilizing rubber bullets (and, in one case, blinding a journalist with them), flash grenades, and tear gas that wrought havoc on their reproductive health. And as protests demanding abolition spread nationwide, police critically injured a Black man in Austin, Texas; National Guard killed a Black man in Louisville, Kentucky; New York cops ran over protesters with their cars. All across the country, officers unloaded on crowds with whatever weapons were available.

So, watching as white supremacists bearing Confederate flags and shirts with the 6MWE insignia (which means 6 million, as in Jews, wasn't enough) bet met with hardly any real police response is obviously unsettling. But the takeaway here isn't that police need to brutalize white supremacists the way they brutalize Black people and those who stand up for Black people's lives. Instead, it is a reminder of who police really seem to protect.