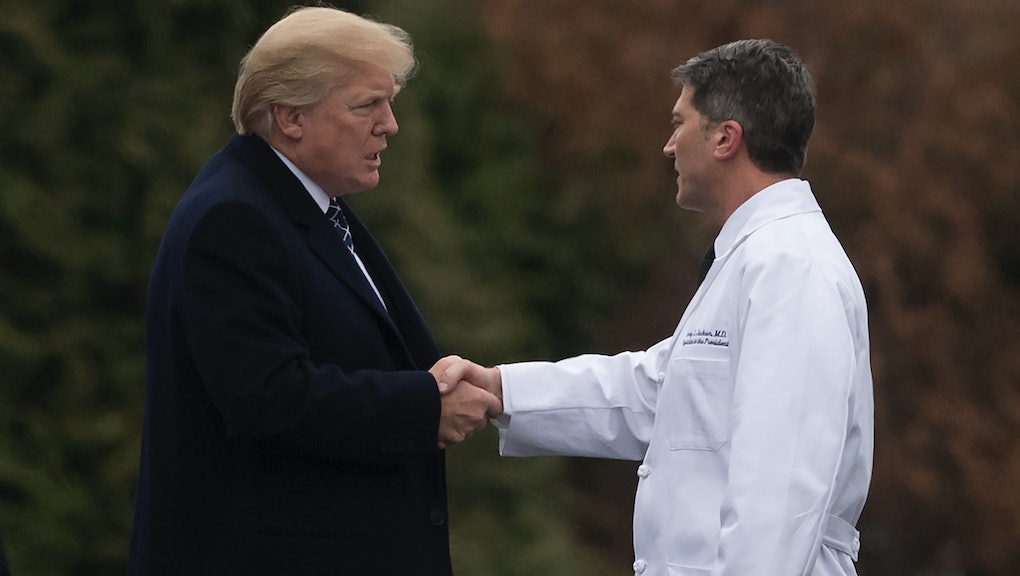 Why did Trump ask doctors at Walter Reed to sign non-disclosure agreements in 2019?

Trump has frequently portrayed himself as a straight shooter, and his administration has often touted their transparency. If that is the case, why is Trump’s medical status so shrouded in secrecy? No one seems to be able to get clear answers on his treatment for coronavirus. And today, two doctors from Walter Reed Medical Center came forward alleging that in 2019, they were asked to sign non-disclosure agreements before treating Trump and that when they refused, they were not permitted to assist in his care, NBC reported.

Personal health information is already protected by the Health Insurance Portability and Accountability Act of 1996 — HIPAA — which made it illegal for medical professionals to share any information about a patient without their permission, anyway, so why would an NDA be necessary? No one’s sure.

Some experts question whether doctors who treat Trump are bound by HIPAA, but legal scholars assert that he is. The White House also maintains that medical professionals who treat Trump fall under HIPAA restraints, reported NBC.

But regardless of HIPAA, according to the 25th amendment, the American people have a right to information about the health and mental competency of the President, and just like a civilian patient could waive their right to privacy to give loved ones better access to their healthcare details, the President could waive his to assuage the fears of the American people. But he’s not. And it appears that he’s doubling down on protecting his privacy by asking doctors to sign NDAs.

Why should there be so much secrecy surrounding the health of our commander-in-chief that it requires a legal gag order on the people treating him? "Ethically and legally you can ask for an NDA, but you don't need one," Arthur Caplan, the director of medical ethics at NYU Grossman School of Medicine, told NBC. Caplan explained that some celebrities and wealthy business people ask doctors to sign NDAs, NBC reported.

In the case of medical records, an NDA adds extra security to already private information, but it’s usually used to protect people from defamation or discrimination. Some people think that Trump has weaponized NDAs as a way to create a culture of silence and fear amongst those that work with and for him. Unfortunately for all of us, the fear-based culture within the White House seems to be leaking out.

The Walter Reed doctors who stepped forward didn’t treat Trump last year, so they couldn’t offer comment as to why he was seeking medical care at the time, NBC reported. No one else can comment, either, because the doctors who did treat Trump did sign NDAs. The White House said it was just a check up, but Presidential check ups usually happen after the new year and are planned well in advance, and this was a last minute visit in November of 2019, NBC said.

Look, everyone has the right to health privacy, especially if they might face discrimination, but if Trump is really the all-powerful maven of health he claims to be, what’s such a big deal about telling the American people whether he had a temperature or a tummy ache? All this mystery indicates that he’s hiding something way scarier than an acid reflux diagnosis.

More like this
California could ban nonconsensual condom removal. Why isn't this already illegal?
By Melissa Pandika
Delta might be the last COVID nightmare variant we get
By Ian Kumamoto
Studies suggest that Pfizer is no longer the cooler vaccine
By Ian Kumamoto
Stay up to date