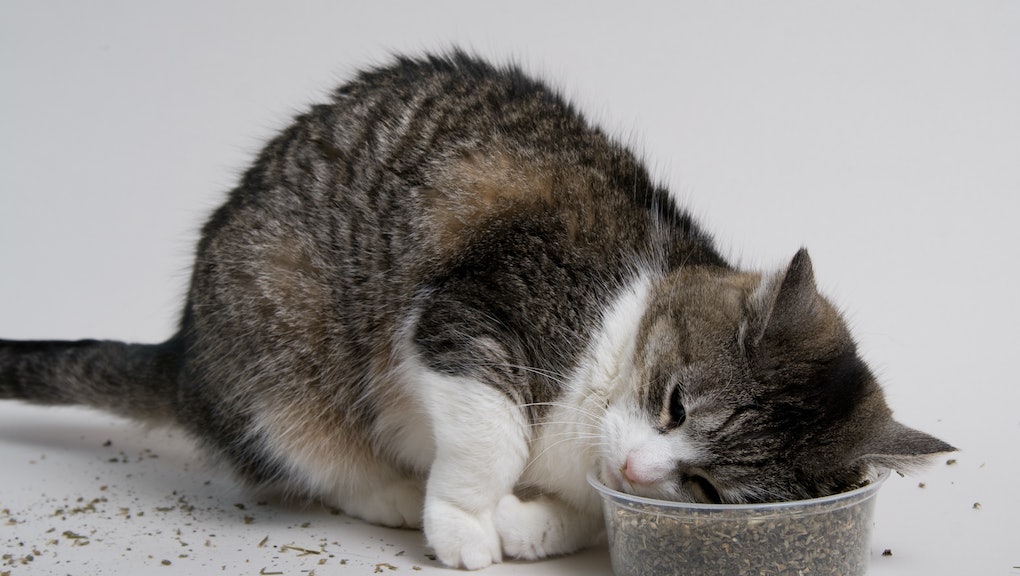 My cat Cabbage loves catnip. I’m not the biggest fan because when she eats it, she gets really aggressive. Whatever toy she's playing with gets destroyed, even if that toy happens to be, say, my hand or another cat. The last time I gave it to her, I thought, "Wait a minute, isn't catnip supposed to be like weed for cats? Shouldn't she be chilling, relaxed, and perhaps jonesing for a snack? I decided to sift past the rumors and dig into why cats like catnip, according to experts.

I give my cats catnip as a treat, and it works so well on some cats that their humans use it to train them. What is it that’s so seductive about catnip that it could compel an otherwise standoffish feline to suddenly comply? “Many people refer to catnip as ‘weed’ for cats because in many cats — around 50-70% — it produces an effect similar to a ‘high,’ where the cat becomes very relaxed, calm, and happy,” says Jamie Richardson, an NYC-based veterinarian.

However, Richardson says, the comparison is only partially correct. Yes, catnip does give cats a high, but the plant is not related to weed. Catnip is usually sold dried, and some products are mixed with other herbs and flowers, but the catnip plant itself is actually a member of the mint family.

One of the key components of catnip is a type of chemical called a terpene (a fragrance compound), known as nepetalactone, which is found in the stem and leaves of the plant, Richardson tells me. When cats smell nepetalactone, it stimulates certain brain chemicals related to mood and happiness. “Human brains are physiologically different to cat brains, and do not respond in the same way to catnip,” Richardson adds, just in case you were looking for a cheap alternative to cannabis.

Scientists are still trying to figure out exactly how and why cats love catnip, but they do have a few ideas. “It’s theorized that cats feel a sense of euphoria, or extreme happiness followed by relaxation, when they smell catnip,” says Richardson. “Some cats may roll around, rub their face against the catnip, vocalize, or ‘zone out’ and lie in a relaxed state.” Like weed, the effects are different depending on how it’s consumed.

“Some cats may simply sniff and rub against the catnip, whilst others may prefer to eat it, particularly when it’s fresh. When eaten, catnip often has a particularly mellowing effect,” says Richardson. You can buy catnip dried — store it in the freezer to keep it fresh — already made into treats, or in oils, all of which will produce the much loved catnip high when smelled or eaten. Some companies, such as Public Goods, go to lengths to make sure theirs is grown and dried organically with no preservatives, and others turn the good stuff into teas and treats (a.k.a catnip edibles).

Okay, but why doesn’t my cat get mellow when she does catnip? “Not all cats behave the same way when they encounter catnip. While many become relaxed and happy, for some, the sense of ‘euphoria’ can manifest itself as hyperactivity or even aggression. Other cats may have no reaction to catnip at all,” Richardson says. It’s like how some people get really paranoid when they smoke weed and others chill and play video games.

The way your cat responds to catnip depends on a few other factors, too. Genetics and personality play a part in what kind of high a cat experiences on catnip. “Sensitivity to catnip is inherited; some cats may not possess the genes that make them sensitive to its effects, says Richardson. And, Richardson says, some cats may simply respond differently to a “drug” than others. These differences will determine not only their emotional response — relaxed or hyperactive; mellow or aggressive — but may also affect what they do with the catnip — eat it, roll around in it or simply sniff it.

The good news is that catnip is safe. Even in large amounts, it’s not considered toxic to cats, but again, this is just for your feline friends, y’all, as catnip abuse in humans can cause vomiting. Some cats may have gastrointestinal issues if they take too much, says Richardson, but they are relatively mild. She adds that as long as what you’re giving your cat isn’t catnip that’s been doused with pesticides, it’s safe and non-addictive, but that you probably shouldn’t give it to them everyday. Catnip is easy to grow yourself if you’re worried about additives. Harvesting catnip, I might add, seems like a fun way to spend a pandemic afternoon with your fur family.

More like this
Wanting to start a family motivated us to pay off $126K in a year
By Marianne Eloise
Can't bear to be in a relationship right now? Blame de-cuffing season
By Suzannah Weiss
I chased my J&J vaccine with a shot of Pfizer. Here's why
By Tracey Anne Duncan
Stay up to date