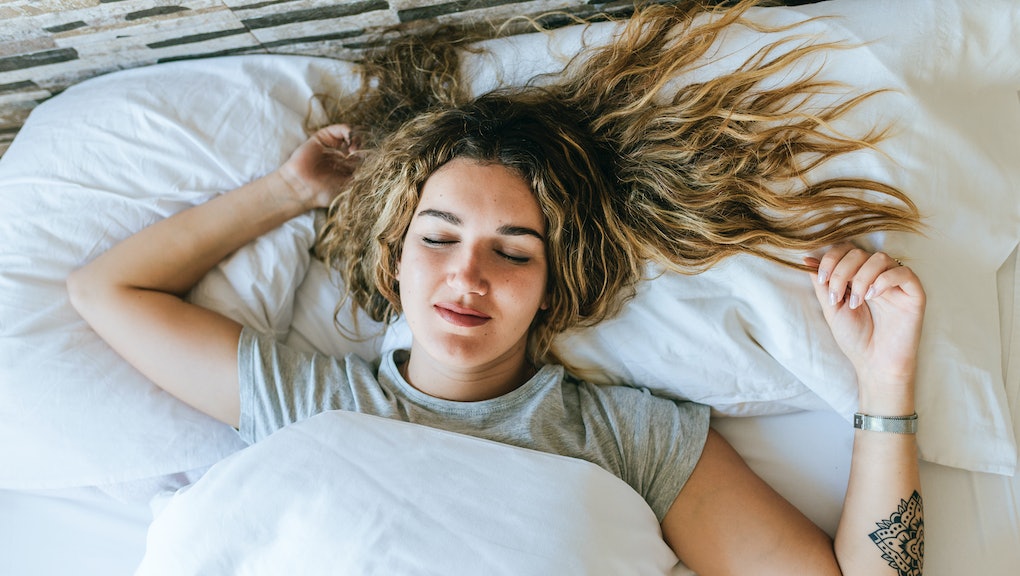 Why do some people talk in their sleep?

In college, I had a roommate who routinely talked in her sleep, usually about her chemistry homework. While I was up late studying one night, she sat up abruptly in her bed. “Where’s my calculator? Have you seen my calculator?” she demanded, distraught. When a third roommate and I told her she was sleep talking again, she muttered an “Okay,” and lied back down.

Throughout my life, I’ve also heard siblings, friends, and S.O.’s sleep talk, the content of their musings ranging from funny (“Yum, French fries”) to unsettling (“Stop it”). My partner tells me I’ve responded to him with an “Mm-hmm” in my sleep. All of this makes me wonder — why do some people sleep talk? I asked some experts to help me understand this eerie phenomenon.

Sleep talking is basically what it sounds like: “a vocalization that occurs during sleep,” explains David Neubauer, an associate professor of psychiatry and behavioral sciences at Johns Hopkins Medicine. “The sleep talker is usually not aware of it.” The talking often lasts for a few seconds, but it can go on for up to a minute. Sometimes it makes sense, and other times it doesn’t. And it’s no surprise that I’ve been privy to it so many times; sleep talking is pretty common. About two-thirds of people have sleep-talked at some point in their lives, Neubauer tells me.

The good news is, other than maybe being a little embarrassing, sleep talking is a benign condition, says Rafael Pelayo, a sleep specialist at Stanford Health Care. But that also means the federal government doesn’t view it as a priority, so it funds few studies on it.

What we do know is that sleep talking falls under a broad category of abnormal movements or actions that occur during sleep, known as parasomnias, says Matthew Scharf, an assistant professor at the Rutgers Robert Wood Johnson Medical School and Medical Director at RWJ Sleep Laboratory Comprehensive Sleep Center. They can range from mild vocalizations to complex behaviors, like driving a car. (While sleep talking is harmless, yelling — especially persecutory things like, “Why are you coming after me?”— and kicking could indicate a rare parasomnia called REM sleep behavior disorder, when you act out vivid dreams, Scharf says.)

Although not entirely understood, it’s thought that parasomnias have something to do with how some parts of the brain remain awake once we sleep, even while most of it is asleep (as seen in the relaxation of our muscles, for instance). “Sleep talking is a pretty common manifestation of it,” Scharf explains.

Sleep talking arises out of stage 3 sleep, a.k.a., N3 sleep or slow wave sleep, he says. That could explain why you’re more likely to experience it when you’re a kid, and when you finally clock in some z’s after being sleep-deprived (say, after pulling an all-nighter). In both cases, you spend more time in stage 3 sleep and have an especially deep form of it. Scientists aren't exactly sure why sleep talking occurs during stage 3 sleep, but it may relate to how “different areas of the brain communicate really well with each other” during this particular sleep stage, Scharf tells me.

Stress and anxiety could also make you more likely to sleep talk, since they could disturb your sleep, “lowering the threshold for that kind of expression to occur.”

You might be genetically predisposed to this phenomenon, since it tends to run in families, Neubauer says. Stress and anxiety could also make you more likely to sleep talk, since they could disturb your sleep, “lowering the threshold for that kind of expression to occur.” In rare cases, certain medications that increase the duration and intensity of stage 3 sleep might also increase your chances of sleep talking, Scharf says.

What exactly influences the content of your speech — whether you ask about your lost calculator or mumble utter nonsense— remains unclear, Scharf says. “For the most part, it’s not really understood what these vocalizations really mean or where they come from.”

But what about those horror stories of people suspecting their S.O. of cheating, or engaging in some other shady business, based on something they mumbled in their sleep? The experts I spoke to all cautioned against taking sleep talk seriously. “It may reflect reality, but it’s out of context, and the other person may hear only snippets,” Pelayo says, likening it to listening to only one side of a conversation. It’s also important to remember that when people are asleep, they lack their normal faculties, Scharf adds. “Just like you wouldn’t hold someone responsible for a dream they had, you can’t hold them responsible for something they say in their sleep.”

If you sleep talk and want to reign in your nighttime ramblings, Scharf suggests getting enough sleep — the Center for Disease Control and Prevention recommends at least seven hours a night for adults 18 and up — and even taking an afternoon nap, to reduce the amount and depth of stage 3 sleep. That said, there’s no need to freak out over talking in your sleep. If anything, you can embrace it as a human quirk, a reminder of how weird and fascinating our brains can be.

This article was originally published on June 27, 2020

More like this
We learned collective grief from 9/11. We could really use those coping skills right now
By Melissa Pandika
Can you learn a new language while you sleep?
By Tracey Anne Duncan
'Nine Perfect Strangers' is a deranged portrait of psychedelic wellness retreats
By Erin Qualey
Stay up to date