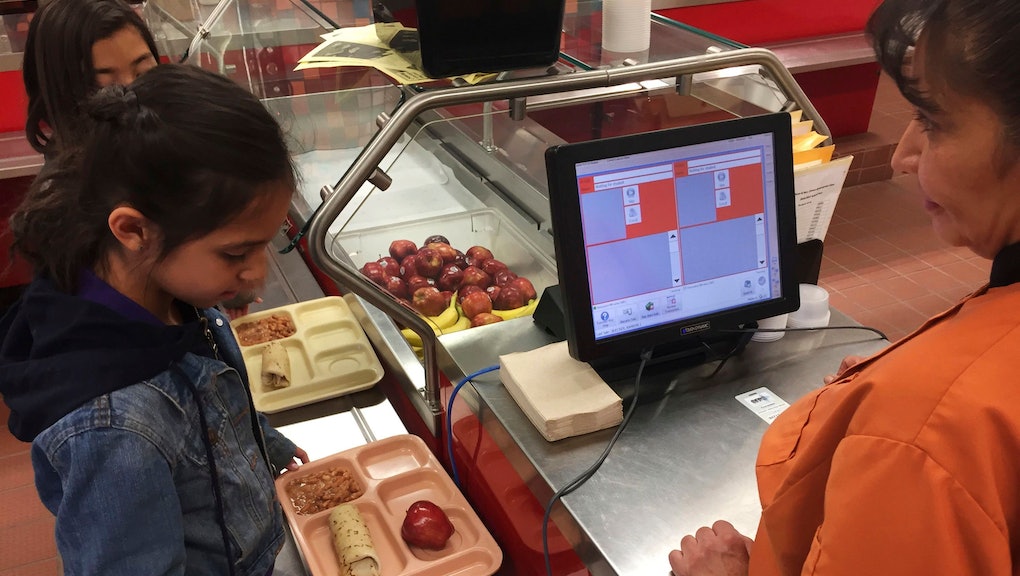 The U.S.'s public school system has a lunch debt problem. Lunch debt, the money owed when a student can't pay for school lunches, is a fast-growing issue in the nation and has become a reoccurring piece of news within the last couple months. Even recently, Twitter has buzzed with debate and disbelief over 'feel good' pieces that, honestly, end up making you feel more disheartened than uplifted.

During May, news broke that a entrepreneurial 9-year-old in Kansas City, Mo. donated $150 to her school — money she earned from running her own bakery — to pay off lunch debts for her peers.

"As a kid I know I love fun things," she explained to the local news, "and when you don't pay, you don't really get to go on field trips."

Just this month, another 9-year-old in Napa, Calif. donated $74.50 from his allowance to his school to pay off the debt owed by his third-grade peers.

The story went viral on Twitter, but not as the 'feel good' piece it was supposed to be. The news prompted people to ask how the nation has come to the point to where adults are relying on children to pay off each others' debts.

And the stories are seemingly unending. Two sisters in N.C. set up a lemonade stand to raise money toward paying off student lunch debt at their school. They're looking to pay off the debt for other schools in their district and, according to their Facebook page, they are still working towards their goal as of this writing.

The scale of the generosity and thoughtfulness of these children is undoubtedly awe inspiring. But it also brings a spotlight to the issue at hand: Is this really all we can do about student lunch debt?

"[Enforcing lunch policies are] the worst part of the job. Nobody likes it," said Matt Antignolo, Food Service Director at Lamar Consolidated ISD, to CNN Business. As someone who worked in public schools for over 20 years, he was very familiar with shame-inducing school policies that called for students to receive noticeable brown lunch bags that signified their debt or have their lunch completely taken away in front of peers after being told they don't have enough money. In 2017, he pushed an aggressive campaign to call and send letters to notify parents of free and reduced lunch programs in an effort to keep these students from experiencing further shame. It received some success for his district, cutting the amount of debt owed by about 30 percent the next year.

But it's still not enough. There are many students who struggle to shake the weight of debt on their still-growing shoulders. Worst yet, during a time when they should be developing their self-esteem, shaming policies only brands them as impoverished outsiders.

"It's very obvious who the poor kids are in the school," said New Mexico state senator Michael Padilla to NPR. He was once in a similar position as a child and resorted to cleaning the cafeteria floors to earn food at school. His experience pushed him to introduce the Hunger-Free Students' Bill of Rights Act, a state law that made it illegal to stigmatize and treat kids with lunch debt differently. The bill passed in 2017.

"[Lunch debt] is not something that [students] have control over, and I don't know why we're punishing them," he explained. "So this prohibits that — it outlaws that — and it focuses more on the child's well-being rather than the debt itself."

In the meantime, other school districts have been taking drastic steps to put students and families on notice about their debt. A high school in Minnesota once threatened students with denying caps and gowns for graduation if student debts weren't paid, which included lunch debts. Philando Castile's mother, in honoring his work and his memory as a victim of police gun violence, donated $8,000 to clear those debts and give the students one less thing to worry about. It was a kind gesture that many people praised while lamenting the fact that this still had to happen in the first place.

Without a good solution, the problems and the problematic solutions have only continued. A high school student in Illinois wasn't allowed to attend prom or school events due to an unpaid debt from middle school — a debt that accumulated due to the school system reportedly processing his lunch assistance application incorrectly without his family knowing. Elementary school students are being denied hot meals and field trips while receiving stamps that brand them as unable to pay. Children are learning at an early age, through no fault of their own, that they belong to a different income level.

According to the School Nutrition Association (SNA), 75.3% of public school districts had unpaid meal debt by the end of the 2016-2017 school year. And about 40% of those districts noted that the number of students without enough money had increased. School districts and principals are finding themselves trapped in a hard place while attempting to manage the issue. In 2018, when Denver Public Schools of Colorado announced full meals to all students, whether paying or not, the debt reportedly ballooned to $356,000 — of which a district grant covered only $100,000. The year prior, the debt was only at $13,000.

It's a rather extreme example, acknowledged Diane Pratt-Heavner, SNA's director of media relations. She commented to Chalkbeat, an education news publication, that other districts with lunch-shaming prevention rules hadn't reported the same issues. Still, Pratt-Heavner noted that free meals could possibly take away the incentive to go through the federally funded free/reduced meal application process, leaving financially tight school districts with the bill.

“In many districts," Chalkbeat quoted, "allowing all kids to automatically get a free meal … can turn into a real financial challenge for the program.”

Instead of school districts trying to scrape for funding, the NSA suggests continuing to push the free/reduced lunch program to parents in as many ways as possible. A report on school meal trends revealed that families of four with incomes between $32,630 and $46,435 are eligible for reduced price meals, while families earning less are eligible for free meals. This qualifies a large amount of students who might not even realize they're eligible. Repeated calls, letters brought home in backpacks, texts and emails, and face-to-face conversations are all techniques that can alert parents about their child's lunch balance. The organization also suggests posting the policy on all websites and social media pages.

Not only is awareness necessary, but education about the program is needed as well since some families could have misconceptions about the application process. Another SNA report, titled When Kids Can't Pay, listed influencing factors to failing to sign-up that include:

Additionally, despite being eligible for the reduced-price plan, some families still can't afford the daily cost of around $0.40. The report also found that the majority of lunch debt issues are genuinely urgent; instances of parents abusing the system, such as being able to pay but refusing to do so, are "rare."

Public school districts have been facing added pressure from the federal government to stop shaming students in debt. In April, U.S. Senator Tom Udall of New Mexico introduced a bill called the Anti-Lunch Shaming Act of 2019 to ban schools from singling out children with identifiable markings or actions. This would prevent branding students by "requiring them to wear wristbands or hand stamps or extra chores."

However, at this time, the bill has yet to be passed.

A look at the number of Go Fund Me pages for school lunch debt shows that this is still a big and growing issue in the United States. “Public schools across the country are really struggling with this issue,” Pratt-Heavner said last month to the New York Times. She insisted that the schools were trying their best to manage the debt and students' well-being, since they “know how important school meals are with students’ academic success."

But, for now, low-income students can only hope that a generous peer or adult will come forth with a donation to wipe the debt — or that preventative and educational measures about assistance programs will be enough to help them. In her statement to the Times, Pratt-Heavner implored the government to take action to help the students in financial trouble.

"If the federal government would provide funding to serve all students free meals, it would not be an issue," she said. "School meals are just as important as textbooks.”