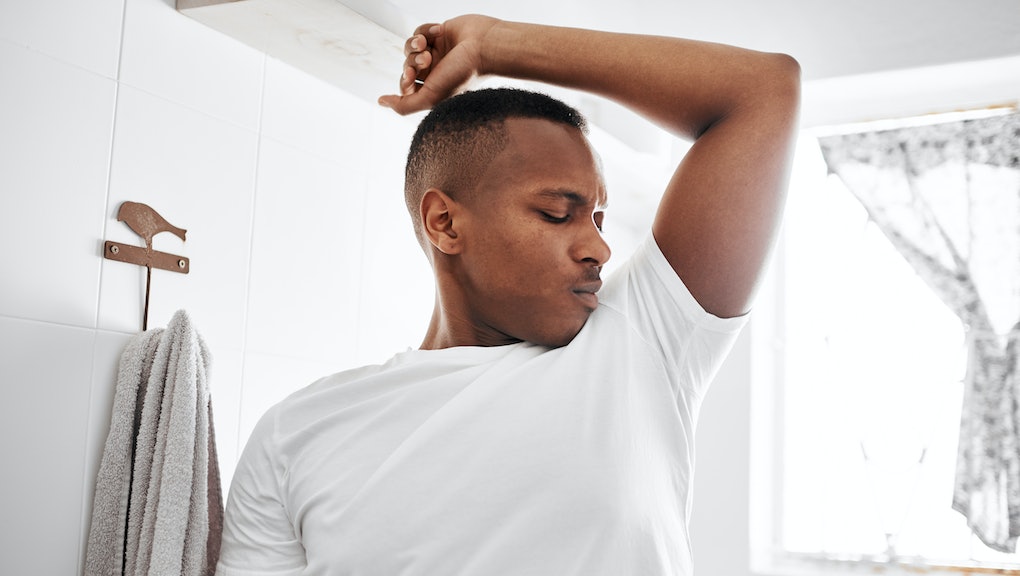 Why has quarantine made me smell weird? An investigation

A couple of nights ago, I was stirred awake by something mysterious. Initially, I thought it was another thunderclap from a storm, typical of a usual East Coast summer, or maybe a stray dog barking that caused me to jolt from my slumber. But then, I caught a whiff of myself — and I am loath to admit that I was, well, funky. And not in a George Clinton kind of way. What was up with this unusual body smell of mine, I wondered.

I am a man who prides himself on smelling fresh and fancy free at all times: I shower regularly using a loofah and a fruity sugar scrub, I have several scents of Old Spice antiperspirant that I rotate throughout the week, and I nearly always smell like grapefruit, satsuma, or ginger due to my deep and unabided affection for body butter. Being so limburger-esque that my own odor woke me up in the middle of the night was, in a word, concerning. I had to find out what was going on.

It turns out there could be a scientific reason for what I’m experiencing. Like everyone else, I’ve been staying at home more these past few months due to the coronavirus pandemic. And my eau de Joe could be due, in part, to my microbiome changing in these past few months as a result. A microbiome is a network of microorganisms living and coexisting in a particular environment, such as in the ocean, on a tree, in a building, or all over an animal. For humans, this means all the bacteria, viruses, fungi crawling all around and in your body right now, of which there are trillions, according to the Harvard School of Public Health. Feel free to take a moment to cringe.

“The microbiome is dynamic — internal as well as environmental factors such as our exposure to other people and to nature can affect the diversity and composition of our microbiome,” says Kemunto Mokaya, a Tennessee-based dermatologist. “In our ‘normal’ day-to-day life, most people are exposed to others at school and work, while commuting and carrying out recreational activities. Exposure to other people increases the diversity of our microbiome because we tend to share and exchange microbiota with those that we are in contact with.”

Brings a new meaning to the words, “It takes a village,” am I right? Every living human being has their own unique microbiome, and just like different cities around the world, each body has their own unique population that’s affected by the people and natural organisms they interact with.

“When we are isolated and confined to certain places, the diversity of our microbiome is reduced, and certain microbes can over-grow due to lack of diversity and competition to keep their numbers balanced,” Mokaya adds. “This can change the way we smell — ergo, it can lead to an overgrowth of bacteria associated with odor such as certain staphylococcal and Corynebacterium species.” In layman‘s terms, Corynebacterium is the cause of the distinct smell of sweat, and staphylococcal bacteria, while they are most famous for the disease, can also cause skin to smell of old sweat and decomposition. I understand you may feel the urge to rush to the shower now, but sit tight.

After months of quarantine, I take fewer trips to stores, I rarely walk in my local park thanks to folks I’ve seen who are lax with masks, and I see my brother and sister-in-law less since they work with the public. Also, for the time being, I no longer frequent museums, bars, or see my friends at all, all who must have been giving me cultured, nice-smelling microbiota.

As someone who loves a scented candle and a fruity lotion, these changes in my body were extremely perceptible to me, and I’ve noticed I smell different even at my squeaky-cleanest. It’s hard to explain, but right now, it sort of feels like I’m a stranger to myself, scent-wise. This has led to some overthinking, and stress-eating, which just compounds the issue.

Even though all of this is sounding very familiar, it might not be only my microbiome and associated bacteria that’s causing my own stinky experience. It could also be attributed to what I'm eating, drinking, and literally doing. “Our body odor often changes due to lifestyle changes such as alterations to our diet, hormonal fluctuations or exercise. Isolation by itself does not cause changes in body odor but the lifestyle changes that occur as a result of isolation can cause changes to how we smell,” says Michele Green, a cosmetic dermatologist. “Body odor can be attributed to changes in diet. You may find that certain foods you don’t normally eat you are now consuming because you’re hunkered down."

In addition, she says, stress can cause hormonal fluctuations which changes body chemistry resulting in increased sweating and body odor. So it’s not just outside environmental factors that affect our bodies, it’s what we put in them, too. Be right back, putting away the cookie butter.

So what is there to do if you’ve had enough of yourself and want to try and change your smell for the better? All the science-heads I spoke to started with the obvious: regular showering and bathing, wearing deodorant every day even if the only place you’re headed to is your couch, switching your towels regularly, and changing out of those same old sweats you’ve been wearing since March into something else, even if it’s just a newer pair of sweats. Also, Mokaya suggests to “try using antibacterial soaps such as benzoyl peroxide or chlorhexidine to keep the bacteria in your body under control.”

Though this may sound a little kumbaya, there’s the added benefit of experiencing nature in reducing your stress levels and thus, the flora in your body that is smelly. And according to a 2019 study in Frontiers in Psychology, that only takes a 20-minute walk amongst the pines.

“Consider adding more prebiotics and probiotics to your diet,” Mokaya suggests, as a reminder that food affects your microbiome in addition to your overall health. “Foods that are high in fiber are high in prebiotics, like asparagus, spinach, Jerusalem artichokes, apples, whole grains, chia and flaxseed. Also, foods high in probiotics are generally fermented in nature, for example yoghurt, cheeses, kefir, sourcream, kimchi, sauerkraut.” Bring on the bratwurst.

And just to say it: We may never return to exactly how things were. It’s not like once quarantine is over, we’re going to magically jump back into behavior we engaged in before the pandemic. We won’t be touching surfaces, animals, and each other as much as we used to. Ignorance was bliss, wasn’t it? Still, there are safe ways to alter your microbiome, if like me, you want to diversify the countless organisms that call your body home.

More like this
We learned collective grief from 9/11. We could really use those coping skills right now
By Melissa Pandika
How to save your skin from climate change
By Melissa Pandika
'Nine Perfect Strangers' is a deranged portrait of psychedelic wellness retreats
By Erin Qualey
Stay up to date