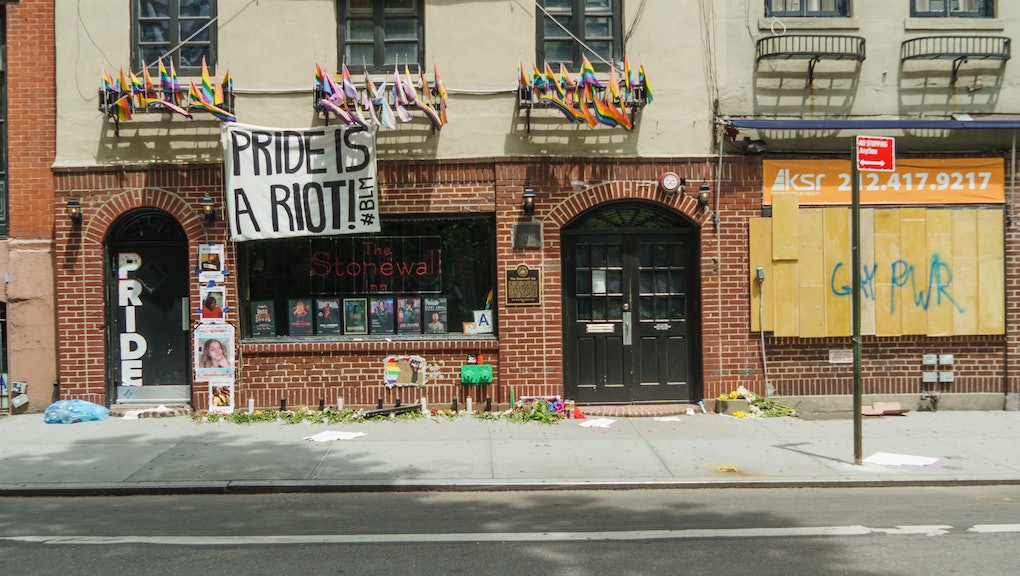 Many people think of Pride as sort of a sexy gay glitter parade, but the first Pride was actually a riot. Don’t get it twisted. Pride is definitely still the best party of the year, but it’s a party that has its roots in radical resistance against police brutality, and no American of any rainbow persuasion should forget that — especially right now.

In case you need to brush up on your queer history, here are the Cliff’s notes: On June 28, 1969, police raided an NYC gay club called the Stonewall Inn, violently pulling patrons from the bar. Marsha P. Johnson and her comrade Sylvia Rivera, two trans women of color who were hanging out at the club, led the aggressive six-day protest against the police that followed and, in effect, set the modern gay rights movement into motion. A year after the riot, the first Pride parade rolled to commemorate this uprising. Since then, June has been declared Pride month to celebrate the sparks of resistance that led to queer liberation.

What this history means is that I, personally, owe the confidence I have to be queer out loud to a Black trans woman who stood up to cops trying to push her around. Without Marsha P. Johnson, I would not get to be a sparkly orange haired unicorn screaming, “Suck my D,” to frat bros who (still, in 2020) stare when I steal a kiss on the street from a cute boo of whatever gender. Without Sylvia Rivera, I might be a silent queer cowering under a cop’s baton instead, and I will never forget.

Queer folx who want to be allies should be, in this moment, as loud and proud about supporting Black liberation as we have been about gay liberation.

I owe the legality of my gay marriage to the Stonewall uprising. (The divorce was my bad, though.) I am recognized as a full United States citizen accorded all the usual civil rights because of that riot, and because I have those rights, I am not going to shut up now. Queer folx who want to be allies should be, in this moment, as loud and proud about supporting Black liberation as we have been about gay liberation. As George Takei tweeted on May 31, “You cannot remain silent today and celebrate Pride month tomorrow. Stonewall was a protest that became a riot because of persistent police brutality against our community. It is our historic legacy.”

Takei’s words should remind us all it is the responsibility of every queer person to remember how we got the rights we so deeply enjoy. In this moment, that may mean a little less glitter and a little more strategizing with our compatriots. On the surface, fighting for social justice may seem less sexy than kissing strangers under streamers, but that’s just a façade created by the white corporate cis-heteropatriarchy to keep us from revolting.

Really though, what could possibly be hotter than helping to see that the liberation we enjoy is afforded to all? If it helps, you can do it in pasties.

More like this
Steak-umm, the social justice warrior no one asked for, tweets fire once again
By Joseph Lamour
The practice of sex selection is going to cost us 5 million girls in the years to come
By Melissa Pandika
How to stay sober when everyone's desperate to party
By Tracey Anne Duncan
Stay up to date