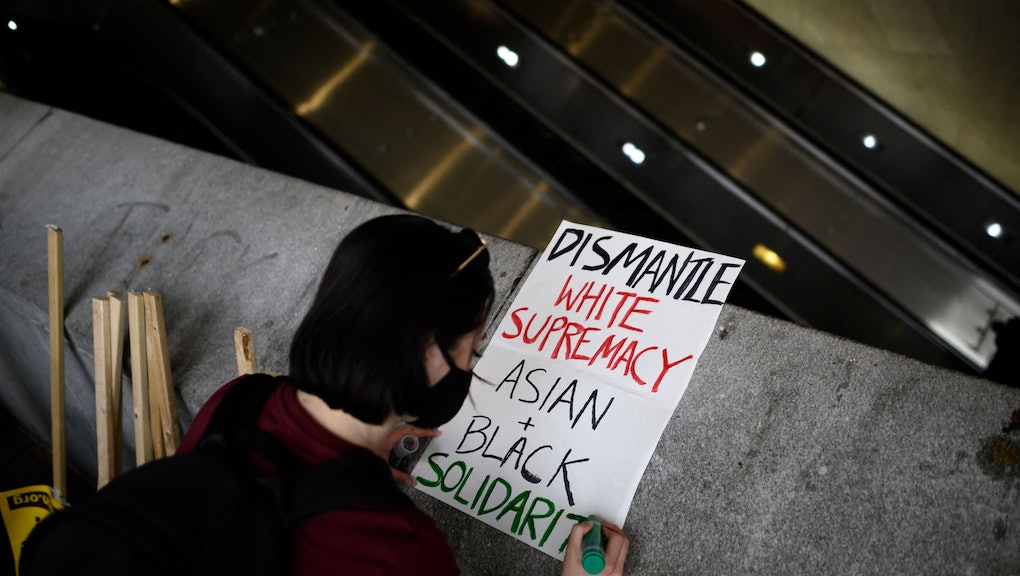 Amid the ongoing swell of anti-Asian violence, a disturbing narrative has coalesced — that Black Americans are overwhelmingly to blame for it. “White supremacy is the reason black [sic] people are attacking Asians?” one reader rage-tweeted in response to my story for Mic about how I want justice for anti-Asian violence, but not through policing, which disproportionately harms Black Americans. Conversations on Reddit, Instagram, and elsewhere on the internet have echoed this narrative. Some people have unwittingly perpetuated it through what they might’ve seen as a way to support those harmed: posting photos and videos of Black suspects on social media. It's why you might want to rethink sharing images of suspects in anti-Asian violence.

Let's clear this up first: So far, there’s little evidence to support the “Black-on-Asian crime” narrative. A University of Michigan study of more than 1,000 instances of anti-Asian racism in news articles published last year found that, of the 57 reports of harassment in which journalists mentioned the perpetrator’s race, around 77% where white. Just 10.5% were Black.

So how did the narrative that Black Americans are behind most of these attacks emerge? One possibility is that, at least anecdotally, “the media doesn’t post photos of white suspects as often as they do Black suspects,” says Kevin Nadal, a Filipinx American psychology professor at John Jay College of Criminal Justice and The Graduate Center of the City University of New York, who researches the effects of microaggressions. When the story of Xiao Zhen Xie, the elderly Asian woman who fought her attacker in San Francisco, went public, “we didn’t see [the white suspect’s] face plastered all over the media,” Nadal tells Mic.

And whereas a Black suspect is often perceived to represent all Black people, white people generally don’t need to worry about a white suspect reflecting badly on their entire race. This parallels what happens when people post photos of suspected terrorists, Nadal explains. “Many Muslim Americans will tell you that when the news breaks of a terrorist incident, their first thought is that they hope the person isn’t Muslim,” in which case their communities need to brace themselves for a spike in Islamophobia, he says. “If the person who allegedly commits an act of domestic terrorism is white, white people don’t get stereotyped as all being terrorists.”

Nadal believes that social media posts of security camera footage and other images of suspects are for the most part well-intentioned attempts to help identify the perpetrator or, if they’ve already been arrested, to “[label] them as a criminal for the world to see.” But that doesn’t change the fact that they can also play into harmful stereotypes of Black people, he says, especially after they’ve been arrested and no longer need to be found. As Nadal tweeted, “It feeds the bias that makes people clench their purses or cross streets when Black people approach." As we’ve seen time and again in incidents of police violence, this bias can cost Black people their lives.

In fact, Nadal questions whether posting photos of suspects on social media, even before they’ve been arrested, is all that helpful. “The news is already covering it,” he tells Mic. “So, posting on your personal social media page of several hundreds of people might not be that effective at identifying the suspect.”

On the other hand, he notes that posting photos of white suspects — even if it might not accomplish much in the way of assisting authorities in identifying them — can help counter the narrative that the majority of anti-Asian attacks are perpetrated by Black people, and convey what the research actually finds: White people are more likely to commit anti-Asian hate crimes.

When Asian Americans post photos of Black suspects in anti-Asian violence, we might also create “more bias in our families and communities, which may result in more tensions between Black and Asian people,” Nadal says. I also personally worry about us contributing to what writer Jeff Yang referred to in a #StopAsianHate blog post as “the recurring trope of Black-Asian conflict,” which he described as a concerted effort to undermine the longstanding solidarity between Black and Asian communities because of the threat it poses to the white American establishment. As Asian Americans, we can resist this trope by refusing to circulate images of Black suspects. Because anti-Asian racism still ultimately stems from white supremacy — a system of power that anyone, of any race, can uphold — the safety of our communities depends on us working together to dismantle it.

As much as these attacks might spur us to want to do something — anything — to help, taking the time to be mindful can help free us all from white supremacy in the long run. Instead of posting photos of Black suspects in anti-Asian violence, you can seek justice for survivors by sharing GoFundMe pages that center their experiences, Nadal says, as well as posting about or donating to community organizations that help them and their families.

More broadly, he adds, it’s important to pay close attention to how our actions might perpetuate not only white supremacy, but also sexism, ableism, fatphobia, and other oppressive dynamics. “What research from microaggressions has taught us is even if or when we don’t intend to hurt people, we oftentimes do,” Nadal says. “So let’s do a better job of understanding our impact.”

More like this
The Weldon Project is working to legalize cannabis federally, with help from Drake and Meek Mill
By Melissa Pandika
Separation anxiety is real for couples who quarantined together
By Tracey Anne Duncan
A suicide safety plan saved my life. Here's what it looks like, and why it worked
By Kimberly Zapata
Stay up to date