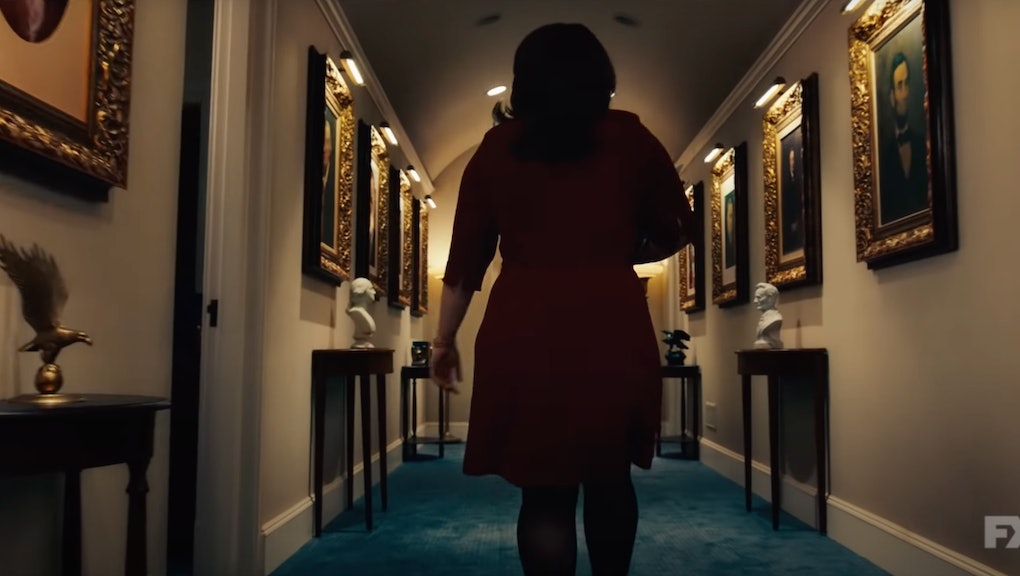 The teaser trailer has finally arrived for the third installment of Ryan Murphy's American Crime Story. This season, called Impeachment, will focus on the 1998 impeachment of Bill Clinton for his affair with then 22-year-old intern Monica Lewinsky. Clive Owen will star as Clinton, but you wouldn't know it from the teaser, as we're only shown the back of his head in the Oval Office. Lewinsky is portrayed by Beanie Feldstein, who we see walking down the hall with a secret gift tucked into a folder. The only words in the whole teaser come from Clinton's secretary: "Mr. President, Ms. Lewinsky’s here to see you.”

It's been a bumpy road leading up to the show's release. Per Variety, the season was originally announced in 2017 after Ryan Murphy acquired the rights to Jeffrey Toobin’s book A Vast Conspiracy: The Real Story of the Sex Scandal That Nearly Brought Down a President. After being cancelled in 2018, reconfiguring in 2019 with Lewinsky as a producer, being pushed back due to the pandemic and criticized for a suggested September 2020 air date that would have put awkward energy in a tense election, the final release date is set for September 7th. The show will also star Edie Falco as Hillary Clinton, Sarah Paulson as Linda Tripp, and Billy Eichner as Matt Drudge.

Past seasons of American Crime Story have portrayed other infamous moments in American criminal history, the first being the trial of O.J. Simpson, and the second, the murder of Gianni Versace. The latter was a gruesome depiction of Andrew Cunanan's killing spree before he tragically shot and killed Versace on the steps of his South Beach home. Where The People Vs. O.J. Simpson focused more on the legal fight to convict, and its elevated portrayal saw Emmy and Golden Globe wins and nominations for its stars Sarah Paulson and Sterling K. Brown, The Assassination of Gianni Versace was less critically acclaimed and raised questions of whether the franchise was heading more toward an American Horror Story aesthetic, Murphy's other television juggernaut. The Versace family even spoke out, calling the portrayal "reprehensible" and "a work of fiction."

This all speaks more broadly to the true crime fad and the murky nature of its ethics that we've collectively agreed upon in order to wildly consume the genre. We've recently seen tensions around the issue flare in the wake of the release of Stillwater, a Matt Damon-helmed drama based on the details of the Amanda Knox case. Last week Knox's Twitter thread and subsequent Medium essay went viral, as she rebuked filmmaker Tom McCarthy for exploiting her story and failing to contact her in the development or making of the film. She told Variety this week, "It’s not a new imagining of my story. It’s one that’s long been in the ether, and one that directly impacts my life to this day."

Lewinsky has made a comeback in the public eye, much by her own sheer force of will to overcome what the sexist media beast of the 1990s tabloids did to her — but she too is a victim of the true crime genre. Lewinsky told The Guardian in 2016, “I felt like every layer of my skin and my identity were ripped off of me in ’98 and ’99...It’s a skinning of sorts...the shame sticks to you like tar.” In 2018 she participated in 20 hours of interviews for A&E's The Clinton Affair and penned a Vanity Fair essay in which she wrote, "Bye-bye, Lewinsky scandal." Hopefully in a producer role, Lewinsky can finally see her version of events dramatized in a way that will reframe a nation's misconceptions about what happened to a young intern, especially in a post #MeToo world.

More like this
Live from New York: Revisiting the totally bonkers era of post-9/11 'SNL'
By Rafi Schwartz
Steve from 'Blue's Clues' gave us the closure we didn't know we needed
By Kara Weisenstein
Tucker Carlson is now spouting the talking points of racist mass murderers
By Rafi Schwartz
Stay up to date