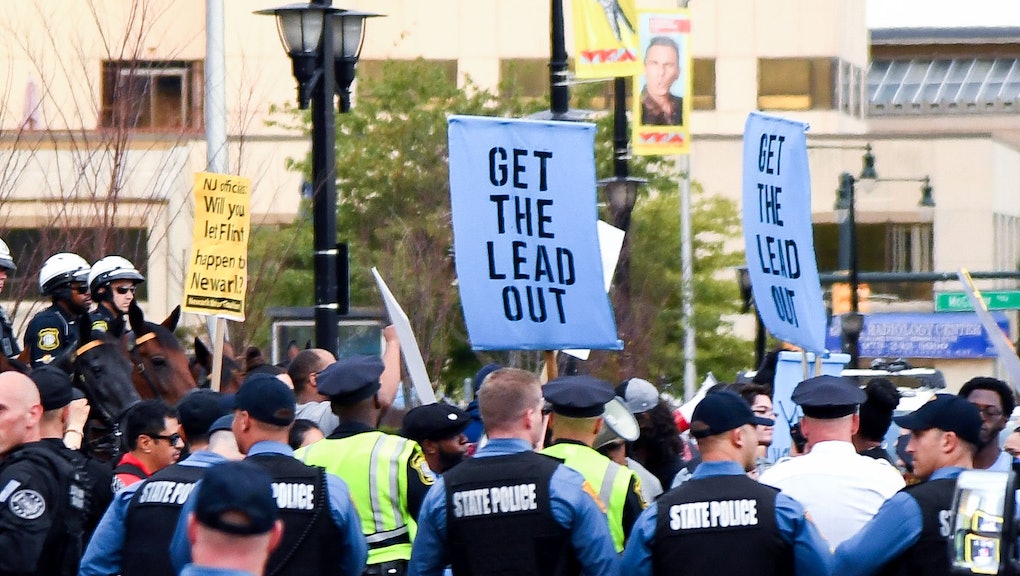 "Will you let Flint happen to Newark?" Protestors storm the VMAs to bring attention to water crisis

On Monday night, some of the world’s most popular musicians descended onto Newark, New Jersey for the 2019 MTV Video Music Awards. Bad Bunny, J Balvin, Lizzo, Lil Nas X, the Jonas Brothers (rebooted), and Missy Elliott all walked the red carpet. Just a few hundred yards away, police blocked off the streets, preventing at least 150 protestors from moving closer to the event. The protestors were holding signs that read “Clean Water 4 Newark Now” and, “NJ Officials: Will you let Flint happen to Newark?”

Ultimately, five protestors were arrested at the event, which lasted for about three hours before and during the VMAs. The protest was organized by the Newark Water Coalition, a group that has advocated on behalf of Newark residents who have to deal with lead in their water.

For the past three years, tests have shown high levels of lead in Newark drinking water — with suspected contamination rates comparable with the crisis in Flint, Michigan. In 2016, 30 public schools were ordered to use alternate water supplies after tests revealed that lead levels were above the federal maximum. Last year, filters, like the ones distributed in Flint, were given to all Newark residents. After the filters were found to be faulty, the Environmental Protection Agency ordered the city to distribute bottled water to residents. On August 15, the Associated Press reported that 20,000 of those water bottles were expired, and the state had to send in thousands of cases to replace them.

In a phone call with Mic, Sabre Bee, 27, a co-founder of the Newark Water Coalition, explains that the lead crisis has created a great amount of pain for Newark residents. “It’s not just frustration, it’s not just anger, it’s ecological grief.”

“People are confused, and they’re scared,” Bee said. “More than being confused and scared, they don’t have a lot of faith in what’s happening in the city.”

Bee described the VMAs as “insult to injury.” The city was in the midst of a water crisis but was still able to host a massive event, and officials reportedly assured VMAs attendees that they would not be affected by lead-tainted water — something they hadn’t been able to assure their own residents.

Anthony Diaz, 33, another co-founder of Newark Water Coalition, explains that the coalition has been working on the VMAs protest for the last three months, and have been organizing around the lead pipes issue for the last nine months. In a phone call with Mic, he called the Monday night protests outside of the VMAs an “organizer's dream.” He partly attributed this to the support they received from other organizations, including the Green Party, Wind for Spirit, Extinction Rebellion, and the Black Panthers.

Diaz explains that one of the main reasons Newark Water Coalition started organizing was because of the issues the city had in responding to the crisis. “You had these programs in place that were supposed to combat this lead issue, but they’re all falling short. Resources aren’t being put in the hands of the people,” Diaz said.

Bee said that the decision to protest the VMAs was strategic; after months of canvassing, holding meetings, and distributing flyers about the lead crisis at the local level, this was an opportunity to reach a national audience about the troubles in Newark.

“We knew that the VMAs is a huge event, that there are millions of eyes on whatever city the event happens in,” Bee said. “We knew we had to take this opportunity where the cameras would already be there, and there would already be people from all over, to make a statement that ‘the place that you’re in right now is in a public health crisis, do you know about it?’”

On Monday, hours before the VMAs began, Newark officials announced that they would attempt to undergo the largest pipe replacement project in the state’s history, with a plan to install 18,000 new pipes, according to the New York Times. The plan will cost $120 million and is projected to be completed in the next 24-30 months, but activists aren’t confident that the city will be able to pull it off.

“The timing of the announcement is uncanny,” Bee said. “In a way, we felt like maybe this is a pacifier to see if we would disperse. In another very real way, we are excited to see what this means for the city admitting their fault in this crisis.”

“Because we have seen the solutions that the city has given so far be mediocre at best, we’re not really strong in faith that the city is going to roll this program out very smoothly,” Bee continued.

And even with the success of their protest — which was supported online by people like actress Piper Perabo and activist Zellie Imani — and the city’s promise of a massive pipe replacement project, Newark Water Coalition is not done with their work.

“We want to introduce new demands and new initiatives, to make sure that we’re vigilant,” Diaz explains. “People are like ‘hey you got your money, you won! You won!’ But let’s look at Flint. Flint is still fighting for clean water, so did we really win? We haven’t won until everyone gets the result that they have lead free homes. That’s when we know we’ve won.”

The City of Newark did not immediately respond to a request for comment.

More like this
Dua Lipa has officially distanced herself from DaBaby
By Kara Weisenstein
More than 200 GOP lawmakers asked the Supreme Court to overturn Roe v. Wade
By Rafi Schwartz
Should public transit be free?
By Andy Crump
Stay up to date