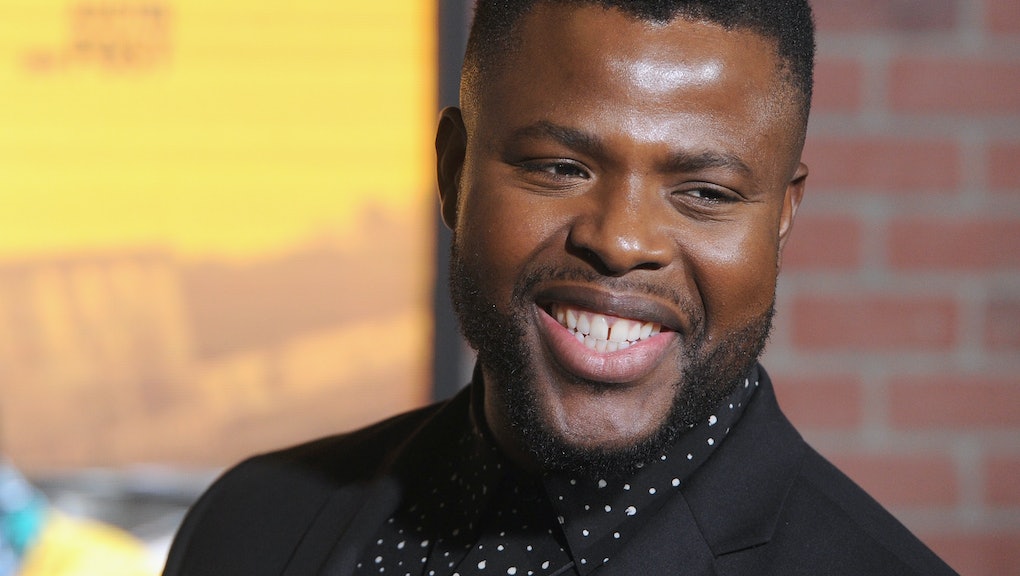 We are finally getting a Black Batman...sort of. Batman Unburied, upcoming Spotify podcast executive produced by The Dark Knight screenwriter David S. Goyer, will be centered on a Batman voiced by Black Panther star Winston Duke.

Duke will star as the billionaire masked vigilante in a Batman story that sounds more Saw than The Dark Knight. Batman Unburied will have Bruce Wayne facing his own "mental demons" as he attempts to save the citizens of Gotham from a rampaging serial killer named The Harvester. That's just the tip of the bat ear. This cerebral journey down Wayne's psyche will start with him being a forensic pathologist working at Gotham Hospital and examining victims of The Harvester. And the project's logline describes Wayne's superhero secret identity as "his alter-ego Batman."

If Batman Unburied is going to be more of a psychological thriller than action flick for the ears, then Duke is perfect casting. He was able to equally convey sarcasm, regal authority, rage and intelligence all within seconds with his deep and evocative voice when playing M'Baku, his breakout role in Marvel's Black Panther. There is no word yet on what other voices will join Duke's for Batman Unburied besides Harry Potter actor Jason Isaacs as Alfred.

News of Duke voicing Batman arrives days after reports surfaced of Michael B. Jordan working on a Black Superman project for HBO Max. Five months before these reports, Warner Bros. sent a Kyrpton-sized shockwave through Hollywood with the announcement of a Superman reboot being developed with award-winning author and overall master writer Ta-Nehisi Coates set to write the script for the first ever Black Superman film. JJ Abrams's Bad Robot production company will produce the film but the Star Wars: The Force Awakens director won't direct it. Coates's first draft of the script isn't expected until December, according to The Hollywood Reporter's sources, but it's said to be based in a cinematic universe separate from what DC fans have come to expect from the recent Henry Cavil-led films.

Duke voicing Batman hasn't inspired much vitriol for assuming the role of a character historically portrayed as white, but Warner Bros's Black Superman film has been criticized for still having Superman be Clark Kent instead of one of the other Black men whom have been Superman in the comics. Detractors point to the story of Calvin Ellis, a Black Kryptonian born Val-Zod who debuted in March 2009 in the comic Final Crisis #7. Critics have also accused the seemingly sudden desire of Warner Bros to make a Black Superman film of being a deflection tactic following Justice League actor Ray Fisher's allegations of racist conversations and unfair treatment on the set of Justice League. Fisher himself even described the news of the studio working on a Black Superman film as "performative" in a tweet.

To his credit, Jordan's Black Superman project is reported to be centered on Val-Zod. That's probably because Jordan has been steadfast in improving Black representation on screen because of the generational impact possible from Black kids seeing themselves in larger than life roles. “It’s important for people to see themselves in roles that they normally wouldn’t see. What that does to the next generation, to a kid or somebody that didn’t think that is something that they could achieve — now they’re thinking about it and daydreaming about it," Jordan told Hollywood Reporter in an April interview.

That reason is part of what makes Duke voicing Batman special. It shows Black kids these superheroes are truly the creations of whoever dares to imagine. Black superheroes, when their race isn't a pandering novelty but a starting point for deeper discussions, can inspire thought-provoking conversations their white counterparts never did. Black people identified with Chadwick Boseman and the boundless Black potential that created the entire Black Panther world so much, Wakanda is in the Black lexicon. Marvel let a Black man assume the Captain America mantle in The Falcon and The Winter Soldier and was able to educate a generation of kids on Black bodies being used for government-sanctioned experiments akin to the horrific syphilis study of the 1930s known forever as The Tuskegee Experiments.

There may be nothing about Batman's story or character that will be identifiably Black in Batman Unburied, but simply having Duke voice one of the most iconic characters in all of American history is another step toward working to make Black people as superheroes a common reality for generations to come.

More like this
A new season of 'Tiger King' is the last thing the world needs right now
By Chloe Stillwell
Insurrection enthusiast and acid trip 'Batman' villain Roger Stone got served court papers on live radio
By Rafi Schwartz
Late night hosts tried to solve the climate crisis (spoiler: they didn't)
By Kara Weisenstein
Stay up to date