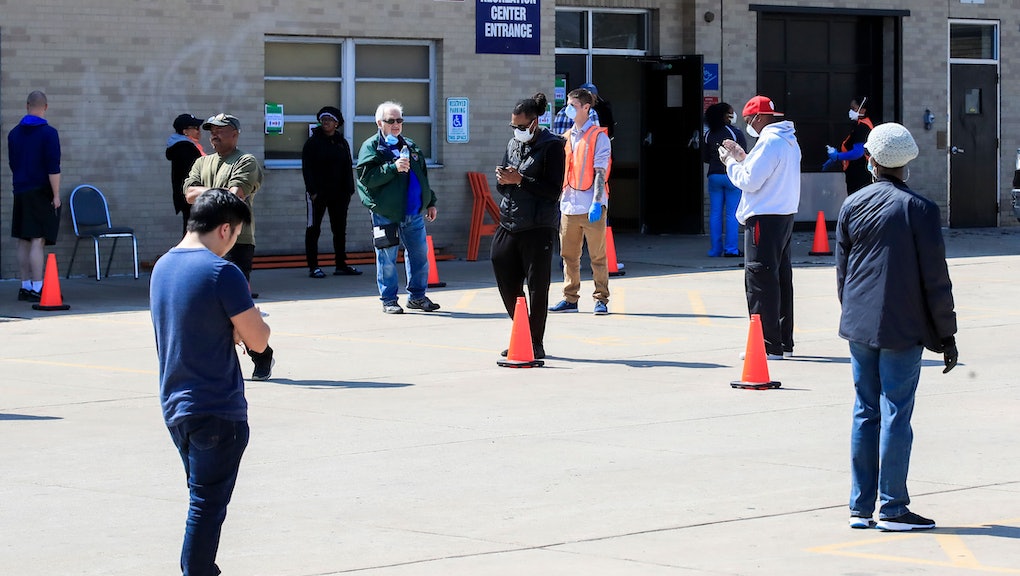 Wisconsin's election is a blatant attack on democracy

The Republican Party’s naked thirst for power is rarely exposed as viscerally as it has been in Wisconsin over the past few months. After a last-minute bout of legal wrangling, Wisconsin is moving forward with in-person elections Tuesday in a bald attempt to use the coronavirus crisis as a mechanism for voter suppression. The party could emerge with blood on its hands, and all for the chance to win a state Supreme Court seat.

Over the past months, as coronavirus has ravaged the country, most states chose to postpone their primary elections rather than require their citizens to endanger themselves by voting in person. Not Wisconsin, though, where the Republican-controlled legislature apparently sensed an opportunity. Beyond just the Democratic primary, the state’s April 7 elections include a vote for a crucial seat on the state Supreme Court, where the conservative judge Daniel Kelly is facing re-election. Republicans foresaw that holding the election during plague conditions — when people are encouraged to stay in their homes and away from others — would suppress voter turnout in major cities, giving their party a huge advantage.

At first, Democratic Gov. Tony Evers agreed with his colleagues across the aisle, believing that the election should continue as planned. But as time wore on, and the scale of the crisis became more evident, Evers’s fellow Democrats in the statehouse became increasingly frantic as they urged him to reconsider. Evers’s "refusal to push for a delay of his state’s Tuesday primary has infuriated fellow Democrats in the state, who are now openly accusing him of failing to prevent an impending train wreck," Politico reported last week.

All the while, Republicans refused to consider any proposals to expand access to the vote, either through delaying the elections or allowing expanded absentee voting. After Evers proposed that every voter in the state be mailed a ballot — whether they requested one or not, which likely boost turnout by removing barriers to voting — Republicans erupted in anger. Scott Fitzgerald, the Republican leader of the Wisconsin Senate, gave an interview (which you can listen to on the Tuesday morning episode of The Daily, starting around the 8:30 mark) calling the proposal a “fantasy” and “completely disingenuous,” claiming that such an effort would be impossible, even though absentee voting is the norm in many states.

“To float the idea that they were going to find enough outer envelopes, ballots themselves, inner envelopes with first-class postage, and mail it out to 3.3 million people in Wisconsin is completely made up,” Fitzgerald said. He further accused Evers of pushing the proposal in response to pressure from “special interests or the party themselves.”

As election day approached in Wisconsin, the scale of the disaster revealed itself. In Milwaukee — a city of more than half a million people, and a Democratic stronghold with a large minority population — only five polling places were open to voters Tuesday, compared to 180 typically. Republicans also refused to lift a provision requiring that every absentee ballot be signed by both the voter and a witness, meaning people would have to potentially break social distancing guidelines even to vote remotely. Beyond that, many people never even received their absentee ballot in time to vote, reportedly spurring hundreds of complaints to the Milwaukee Election Commission.

On Monday, with the election only a day away and chaos staring him in the face, Evers at last ordered the election to be postponed until June 9. Republicans sued, and Evers’s decision was overturned late Monday by the state Supreme Court as well as the U.S. Supreme Court, which both lean ideologically to the right. The U.S. Supreme voted 5-4 along ideological lines. In a scathing dissent, Justice Ruth Bader Ginsburg wrote that the conservative majority's decision "boggles" the mind. She added: "The court's order, I fear, will result in massive disenfranchisement."

The point of all this risk and drama is simple: The GOP wants to maintain its grip on the critical Wisconsin state Supreme Court. In arguably the country's most important swing state, maintaining that majority could prove crucial. And for state Republicans, it seems, deciding who should have that power is too crucial to be left to the will of the voters.

The result of Republicans’ vicious fixation on victory at all costs, and Democrats’ ineffectual response, has been abundant evidence emerging Tuesday of voters caught between the desire to protect their health and to exercise their right to vote. Photos show voters in big Wisconsin cities waiting in huge lines alongside scores of people for multiple hours, potentially exposing themselves to coronavirus — not to mention the state’s primarily elderly poll workers. It’s a nightmare, and a vision of what might await in the national vote this fall, as Republicans seize the opportunity to exploit chaos to maintain power.

More like this
Jailhouse lawyer Johnnie Cook is fighting for pandemic justice
By Mai Tran
New York will finally offer vaccines to all inmates, after a judge's order
By Vanessa Taylor
New York has set aside a massive, first-of-its-kind fund for undocumented workers
By Rafi Schwartz
Stay up to date