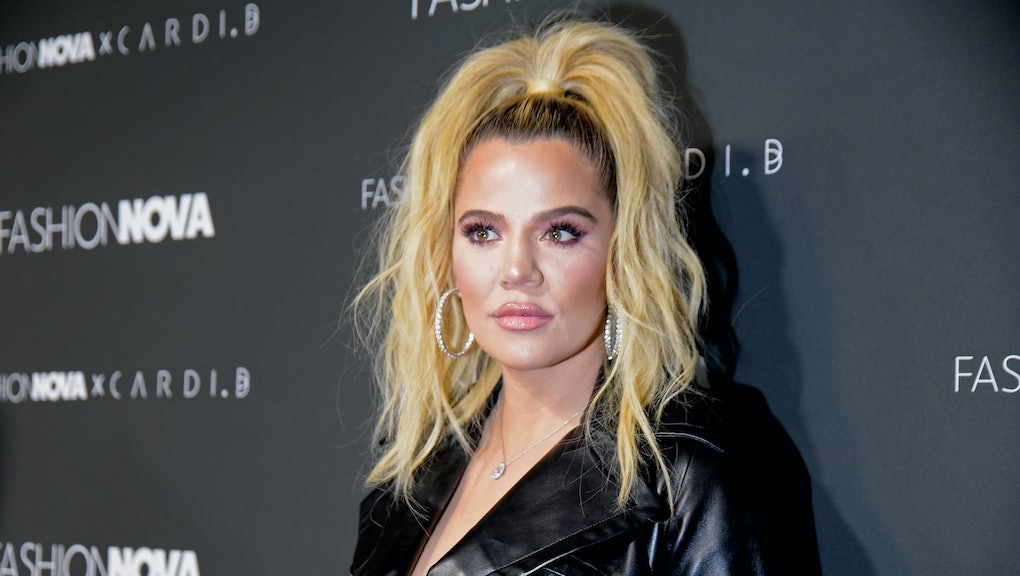 It was a reminder that the Kardashian family works very, very hard to maintain a brand image. On Easter Sunday, the uber-famous sisters gathered poolside to pose for thirst-trap selfies in string bikinis, which were then glossed up by photo editing software and uploaded to social media. To Khloé Kardashian’s dismay, a raw photo of her looking quite fit and frankly normal — but not a flawless glamazon — was also posted online. Custodians of the family’s image sprang into action, trying to scrub the offending image from the internet. But their efforts kind of backfired, drawing way more attention to the photo and Khloé’s body as a result, even as a lot of the response to the unedited photo was positive.

On Wednesday, the third-eldest Kardashian felt she needed to address the situation, so she posted two videos and a photo of herself on Instagram, along with a statement that started: "Hey guys, this is me and my body unretouched and unfiltered." Khloé called the unauthorized photo “beautiful,” but defended fighting to erase it: "As someone who has struggled with body image her whole life, when someone takes a photo of you that isn't flattering in bad lighting or doesn't capture your body the way it is after working to hard to get it to this point — and then shares it to the world — you should have every right to ask for it to not be shared — regardless of who you are."

On one hand, it’s hard not to feel for Khloé. Ever since the Kardashian family vaulted to fame in 2007 with their reality show, she’s been the target of body shaming. “I didn’t realize I was the ‘fat’ sister until I went on TV and the media started saying that about me,” Khloé told People in 2015. “I knew I didn’t look like my sisters and I didn’t have those shapes, but I didn’t think that was wrong.” In recent years, her look has noticeably evolved, which of course drew even more scrutiny. People speculated she’d had work done, which Kardashian denied, claiming her changing appearance was thanks to makeup and losing weight.

Khloé has been transparent about editing her selfies and her love of Facetune, which she called “life-changing” on a 2016 episode of Chelsea Handler’s Netflix docuseries, Chelsea Does. Handler said she’s a little opposed to the idea: “You fix your face… and your face is basically gone by the end of it,” the comedian argued. “Yes, it’s the best,” Kardashian countered. “It’s not real, you are presenting to the world what you want them to believe you are. It’s amazing.”

In the statement she posted on Instagram this week, Khloé doubled down on her right to project an unblemished image to the world. “I love a good filter, good lighting, and an edit here and there. The same way I throw on some makeup, get my nails done, or wear a pair of heels to present myself to the world the way I want to be seen,” she wrote. “It’s exactly what I will continue to do unapologetically. My body, my image, and how I choose to look and what I want to share is my choice. It’s not for anyone to decide or judge what is acceptable or not anymore.”

Yes to personal and bodily autonomy. And yet, it’s jarring to see Kardashian deploy body-positive language in defense of perpetuating unattainable beauty standards. As Handler quipped on that episode of Chelsea Does, “I wonder whose family that came from.” To which Khloé replied, “No comment.”

The fact remains that she’s part of the ultra-powerful Kardashian-Jenner industrial complex, and projecting an aspirational image is key to maintaining her wealth and influence. Khloé might tell her 136 million Instagram followers that “the pressure, constant ridicule and judgment my entire life to be perfect and to meet others’ standards of how I should look has been too much to bear.” But then she and her sisters will turn around and sell those same people waist trainers and flat-tummy shakes. The Kardashians aren’t a cog, they’re the whole machine.