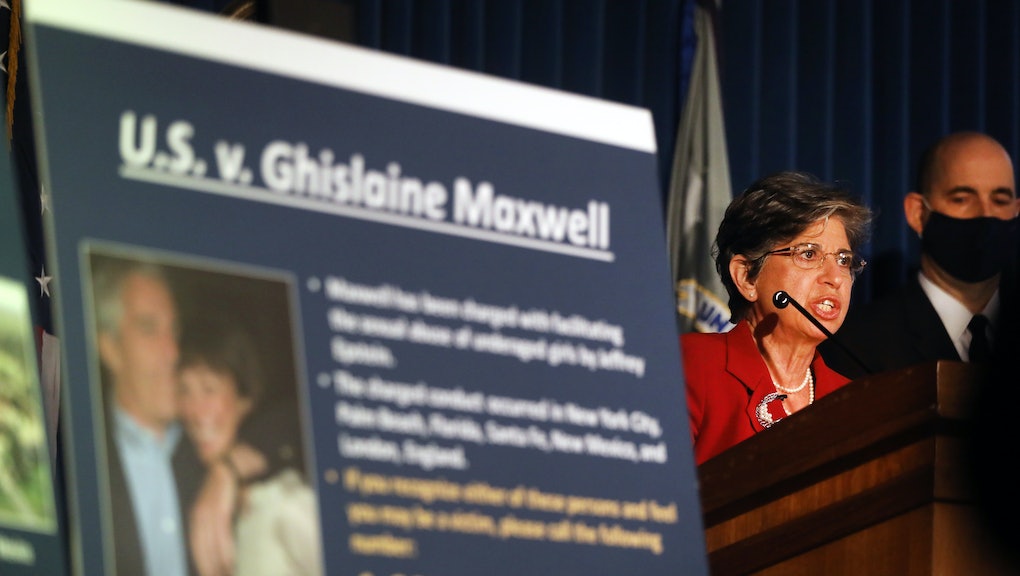 Ghislaine Maxwell, the longtime girlfriend, fixer, and alleged accomplice of convicted sex offender Jeffrey Epstein categorically denied any wrongdoing or criminality, according to a newly unsealed 2016 deposition. In the document, lawyers for Virginia Roberts Giuffre, a woman who filed charges against Maxwell in 2015 for crimes committed when Giuffre was 16, question Maxwell repeatedly about what she knew of Epstein's abuse.

In one instance, Maxwell denies one of Giuffre's accounts of an alleged encounter with Britain's Prince Andrew in a bathtub at Maxwell's London home. During questioning, Maxwell called the claim "ludicrous and absurd," saying what Giuffre described couldn't have happened because the "tub is too small for any type of activity whatsoever." Andrew has denied meeting or having sexual encounters with Giuffre.

Elsewhere, Maxwell declared, "I never saw any inappropriate underage activities with Jeffrey ever," referring to Epstein.

Maxwell, the daughter of a wealthy publishing magnate and New York socialite, met Epstein in the 1990s, which is when lawyers say the alleged criminal behavior with and on behalf of Epstein began. In the following years, Maxwell would allegedly recruit, groom, and subject girls and teenagers to Epstein's sexual abuse at his properties both in the U.S. and abroad.

The 2016 deposition comes four years after Maxwell seemingly disappeared from the public eye, and just four months after the FBI arrested Maxwell on multiple counts of conspiracy and perjury, the latter of which is linked to the deposition that was unsealed Thursday.

It's in that 465-page testimony that Maxwell, now 58, denied any culpability or knowledge of Epstein's crimes and refused to admit that she took part in the abuse. "I just testified I never had nonconsensual sex with anybody ever, at any time, at anyplace, at any time, with anybody," an obstinate Maxwell said. Maxwell also stated throughout the deposition that her lawyer advised her to refuse to answer questions from Giuffre's lawyer.

Maxwell, a woman who had connections to powerful figures across the globe, managed to side-step Epstein's rapid descent. The couple, who once socialized with President Trump and former President Bill Clinton, became two of the most infamous figures in recent years as more details have been made public. Information of their crimes is a result of the brave women who came forward to detail Epstein's abuse, allegedly with Maxwell's help, when they were teenagers and young adults. One of the most outspoken individuals is Giuffre, who claims she was first forced to offer Epstein a sexual massage when she was 16 and later ordered by Maxwell to have sex with a number of her high-profile friends.

It's still unclear what role the deposition will play in a potential conviction of Maxwell on the charges levied against her earlier this year. However, the extensive document is the largest trove of first-person information the public has received in the years since Epstein's incarceration and subsequent death by suicide. Maxwell pleaded not guilty to all charges.