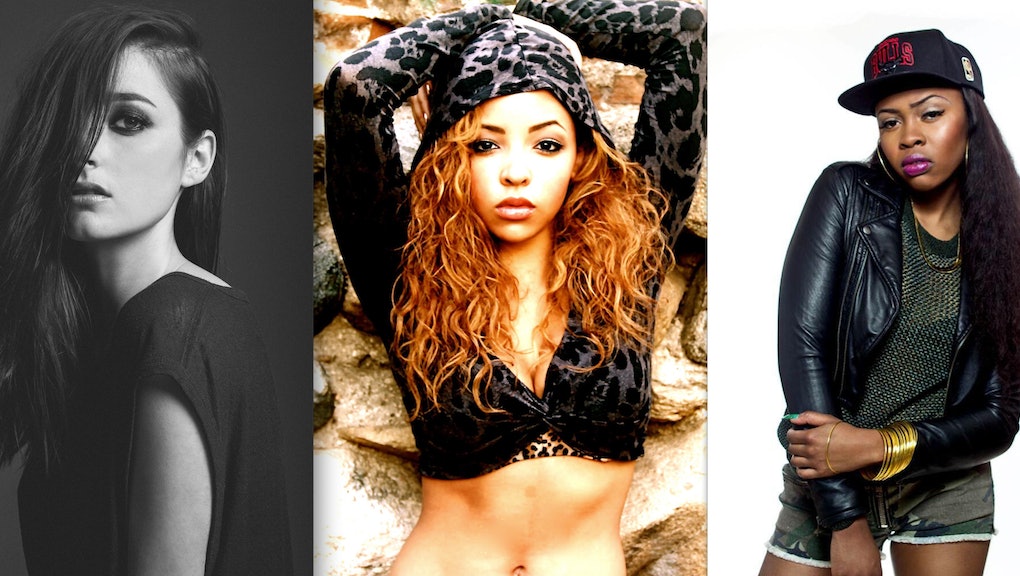 There are only two women currently at the top of Billboard's Hot R&B Chart and one of them is, of course, Beyoncé.

Beyoncé's great, but there's actually a whole world of insanely talented, catchy and moving young female R&B  singers who are all too often overlooked. Queen Bey deserves all her success, but popular R&B fandom doesn't deserve to be reduced to one person. It's time we stepped outside the Beyhive and realized that other people can be #Flawless, too.

Many hip, young R&B singers traffic in a world of darkness and gloom, full of swirling instrumentation and down-tempo beats. Few have proven themselves as effective at this sound as quickly as Banks, who arrived seemingly full formed in 2013 with a pair of EPs.

Her debut album, Goddess, came out last month to critical acclaim, and it only further refines and intensifies her approach.

Tinashe is the only non-Beyoncé woman currently on the R&B charts, and she'll be there more often very soon.

Her major-label debut comes out Tuesday, and it's crystallizing the new sounds of R&B and hip-hop. Often she masters the dreamy club sound, but she can drive on hits like "2 On." She's versatile, she's young and she's here to stay.

Varner's debut album, Perfectly Imperfect, was crisply produced and full of easy pleasures — Vulture named it one of the top 10 albums of 2012. Her latest single continues to build her credentials: It has a smooth flow and a verse from A$AP Ferg, who is building a second career as a duet partner, having also appeared recently on songs by Haim and Ariana Grande.

Braxton ruled '90s R&B, selling over 40 million albums and winning six Grammys with the assistance of Babyface, a triple threat as a singer, songwriter and producer. Earlier this year they teamed up for a duets album that updated their sound for this decade. It's a time of diminished record sales, but Love, Marriage & Divorce still debuted at No. 1 on the R&B/Hip-Hop album chart. That's where it belongs.

Few artists in any genre cover as much ground as Monae. The Electric Lady from 2013 charted a whirlwind path through the last 60 years of popular music and even earned a rare guest appearance from Prince. With most singers, the question is how long can they keep up with the fast pace of modern pop — with Monae, the opposite question is just as important.

Ware is English, and English singers have a long tradition — from Dusty Springfield to Adele and Smith — of reaching toward the sounds of vintage American soul. But Ware's interested in her own country's soul — the time in the '80s when English R&B flowered with Sade, Soul II Soul and Lisa Stansfield. Songs released ahead of Ware's new album have found her collaborating with singers like Dev Hynes and Miguel and honing a sensual neo-soul sound that evokes D'Angelo in his prime.

Kelela takes the raw material of '90s R&B and stretches and warps it almost to a breaking point. Her mixtape Cut 4 Me, released at the end of last year, earned universal acclaim. This year she worked on the song "Melba's Call" with the producer Bok Bok — who also contributed to Cut 4 Me — evoking the work of Jimmy Jam and Terry Lewis, former Prince affiliates who produced innovative R&B pop in the '80s and '90s for the likes of Janet Jackson and the S.O.S. band.

At a time when radio R&B is dominated by creeping beats and sticky, hushed vocals, Hudson ascribes to an older model: disco.

Her new record, JHUD, is unabashedly fun. The former American Idol contestant and Oscar and Grammy winner is happy to push the tempo and unafraid to belt at full volume.

Sullivan is preparing to release her third album of modern soul. It comes after a four-year hiatus since her last release, Love Me Back. As a singer who's never afraid to bare her soul, she should have a lot to get off her chest.

Blige is a legend who has had a massive impact on the course of R&B, but she gets almost no attention anymore. She released the overlooked Think Like A Man Too soundtrack earlier this year with songs like "Power Back" that showed her easily mastering current trends. Yet as she's aged, fans have deemed her no longer relevant for no clear reason.

For her next project, Blige is going to change that. She's teamed up with a number of precocious English artists, including Sam Smith, Emeli Sandé and Disclosure. The singles she has released in advance of The London Sessions affirm her mastery of ballads, while also pushing toward a new direction: dance.

Tamar hasn't had the same level of success as her older sister Toni, but that might be about to change. Her latest single, "Let Me Know," works around an Aaliyah sample that only reveals Braxton's impeccable taste: Aaliyah has never been more influential in R&B and electronic music than she is now. "Let Me Know" also features the rapper Future, one of Atlanta's biggest stars. Braxton has her ear to the ground — a skill as important as belting to a true R&B singer.

From Curtis Mayfield to R. Kelly, Chicago has always played an important role in R&B. Tink may be the city's next hope: She both sings and raps, and has attracted admiration from hip, more established acts, like How to Dress Well. This year, she released a collaboration with Jeremih — who is also from Chicago and currently has a hit in the top 10 on the Billboard Hot 100 — and is working on a highly anticipated album with producer maestro Timbaland.

Lanza's debut album, Pull My Hair Back, was full of post-Drake R&B, with Lanza's vocals curling and drifting through cavernous beats. It earned her a nomination for Canada's prestigious Polaris Music Prize, along with Drake, Arcade Fire and Mac Demarco. This is deep, introspective R&B of the sort you don't usually hear on the radio.

Americans tend to import their classic-sounding soul from Adele and Smith, but there's no need to cross the Atlantic Ocean to find vintage R&B. Jones has been putting out tight, fiery soul and funk for more than a decade. After a bout with cancer, she's back stronger than ever, showing the kind of resilience that soul and R&B have always been about.

Morris is on the label Wax Poetics, which publishes a regular magazine devoted to all things R&B. She's steeped in snappy break-beats and big basslines. On her last album, a covers project entitled Mockingbird that came out in 2013, she pulled a variety of music into her orbit, weaving soul together with Radiohead, Soundgarden and Metallica.

Uchis is an R&B deconstructionist. Informed by hip-hop, she takes what she wants from classic hits — Delegation's "Oh Honey" or Bob Marley's "How Many Times" — and leaves the rest behind, showing that great songs sometimes don't require much besides a strong voice and a good sample.

Gray is in possession of one of R&B's most unique voices, which somehow mixes sweetness and sandpaper. Her latest album, The Way, moves easily between soul, funk and the grittiest of blues — the single "Bang Bang" is as heavy as anything Jack White can put together. Gray even went back to the source on one track, working with Booker T. Jones, from the iconic '60s soul band Booker T. and the MG's.

K. Michelle is a powerhouse whose audience doesn't yet match her energy. She's at her best on a song like "Fakin' It," where she cheerfully tricks the boys into thinking they're in control. This is a woman with a strong message and a clear passion. She deserves an audience to match.

This band often features lead vocals from Syd Tha Kyd, who first attracted attention for her work in the rap collective Odd Future. As a leader of The Internet, she's helping to carry a torch for open-minded, funky explorations. Last year's "Dontcha" luxuriates in the depth of its groove — the best slow jam Odd Future would never make.

Streeter has already proven her ability to get on the charts: She's written for artists like Chris Brown, Brandy, Estelle and Alicia Keys. Now, she's making it on her own as a singer. Her performance on the sweet, spacious duet "It Won't Stop" is blissful. Watch for her debut full-length soon.

The former member of Destiny's Child stepped out of Beyoncé's shadow in 2013 with Talk A Good Game, an album that included collaborations with star producers like Pharrell Williams and the Dream. Rowland's gripping, cathartic "Dirty Laundry" was one of the strongest songs of the year, as she wrestled with her feelings about Beyoncé and sexist treatment from record executives.

As of this week, Rowland is getting her own share of media blitz with coverage of her almost nude, definitely pregnant photos. Music journalism at its best.