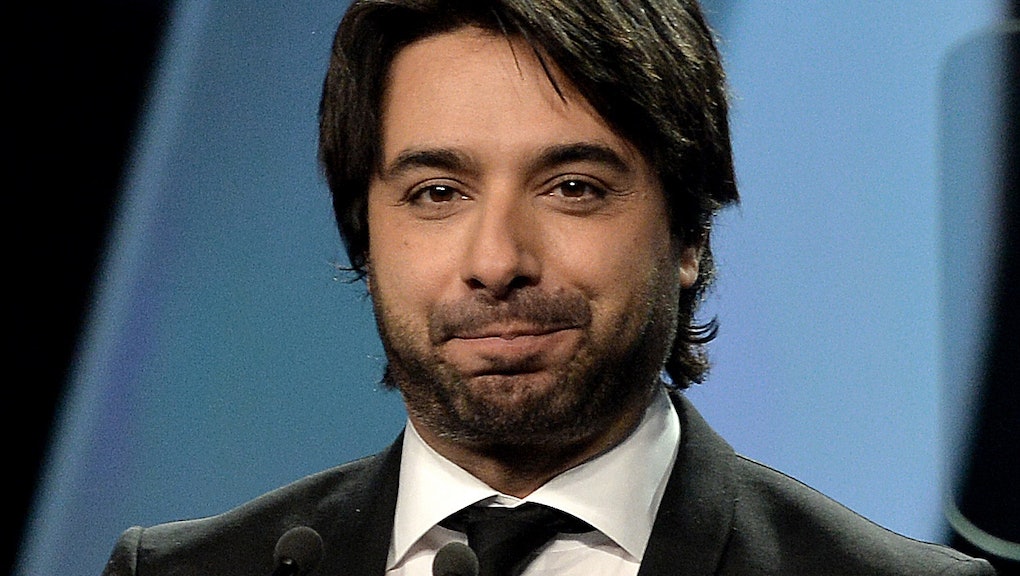 If you've been accused of crimes against women, it's been a good week for you. Whether you're part of New Zealand's "Teen Rape Club" who just got completely acquitted of any charges or you're Bill Cosby, a man who still roams free despite being accused of rape by 13 different women, there's no pitchfork mafia going after you. But the woman who made a viral video of her experience with sexual harassment? She's getting rape threats.

What a wonderful time to be a woman.

Jian Ghomeshi, a man I knew as both a friend and a fan, has recently been accused of assaulting three women, all of whom have told generally similar stories. The man I grew up listening to on publicly funded radio channel CBC, and whom I have long admired for his deep dives exposing sexism and violence against women, is now an accused woman-beater himself — and has apparently fallen back on the tired stereotype of the "jilted ex" who is "painting herself as a victim" as his defense.

His justification isn't new, and many have pointed out it reinforces outdated, harmful stereotypes that suggest women carefully craft false rape accusations looking for retribution against men. It's a story that continues to shield accused men, especially those in positions of power. The successful use of these methods lays the groundwork for a culture in which no woman feels safe to accuse her abuser.

How did one of the biggest "feminist" male personalities — and a woman's studies minor to boot — become "that" guy?

All men who hurt women are dangerous, but men like Ghomeshi, men who built careers on exposing sexism in pop culture and media, while hiding their misogyny behind the curtain of feminism, seem somehow worse. As my colleague Derrick Clifton writes, men like this make us put our guards down. According to the revelations in the Star, two of the three women who have accused Ghomeshi of abuse were fans who contacted the radio host on Facebook. The power dynamic here is clear: Judging by his public persona, why wouldn't these women feel safe with him?

As Anne Thériault suggests in Vice, Ghomeshi will most likely recover from this scandal. "Men in his position very rarely suffer any real and lasting consequences for these types of allegations — look at Roman Polanski, or Woody Allen, or Chris Brown," she writes. "Even when there is plenty of solid evidence and a conviction has taken place, men who abuse and rape manage to come out on top." Indeed — and incredibly — #TeamJian was trending on Twitter earlier this week. Why were some so quick to jump to his defense?

We live in a world where calling out sexism makes you more vulnerable than perpetuating it. That's why people like George Will, a rape apologist who has called survivors of sexual assault "privileged," can go on to earn $48,000 to speak at a college, while feminist activist Anita Sarkeesian is forced to cancel her speech after the school received a warning from someone threatening a mass shooting in retaliation. Even when men are accused of rape, they aren't met with the same amount of vitriol. That twisted logic explains why girls like Rehtaeh Parsons or Audrie Pott were cyberbullied to death after being raped, while their attackers' reputations have remained largely unscathed. It also explains why the Steubenville rape victim was violently threatened online, while her rapists weren't targeted at all.

In many cases, it's easier to have a public life as a rapist than as a rape victim.

Although he is being accused of assault, Ghomeshi has had no shortage of support. Besides the #TeamJian hashtag, two petitions, one asking the CBC to apologize and another defending Ghomeshi's "privacy," have already garnered thousands of signatures. Most troubling of all, Ghomeshi's fan page has more than tripled in likes since the allegations against him were made public, suggesting that support for him — or at least, his fame — has increased. Since when does being accused of sexual assault make you more popular? Even if these allegations turn out not to be true, the fact that he has garnered more followers as a result of being accused of assault speaks volumes about the way rape culture works.

Given that the last time a person came forward with criticisms against Ghomeshi, she was barraged with online threats, it's no surprise the women in this case want to remain unnamed. After Carla Ciccone recalled a creepy encounter with the host on xoJane, she "received hundreds of abusive messages and threats," the Star reports. "An online video calling her a 'scumbag of the Internet' has been viewed over 397,000 times. Ciccone's claims about the behavior during her 'bad date' were far less severe than the allegations of abuse from the women now accusing Ghomeshi, who fear the online backlash could be significantly worse for them if their names were made public."

Over and over and over again, women are criticized and their allegations questioned because they didn't make an official police report. We see the same pattern showing up in this case as well. But how can anyone make that argument in light of the way women who do come forward are consistently punished for doing so? We view cultures where women are stoned for being raped as barbaric, when a look at our own society shows a similar culture of blame on female victims of assault.

Image Credit: Above the Law

Despite all our talk of equality and our work toward gender parity, the fact remains that today, the pitchforks don't come out for men who hurt women, but for the women who have the courage to speak their truths. This isn't just ignorance, it's the blatant perpetuation of a cultural ideology that will continue to keep women in state of fear at retribution for being a victim.