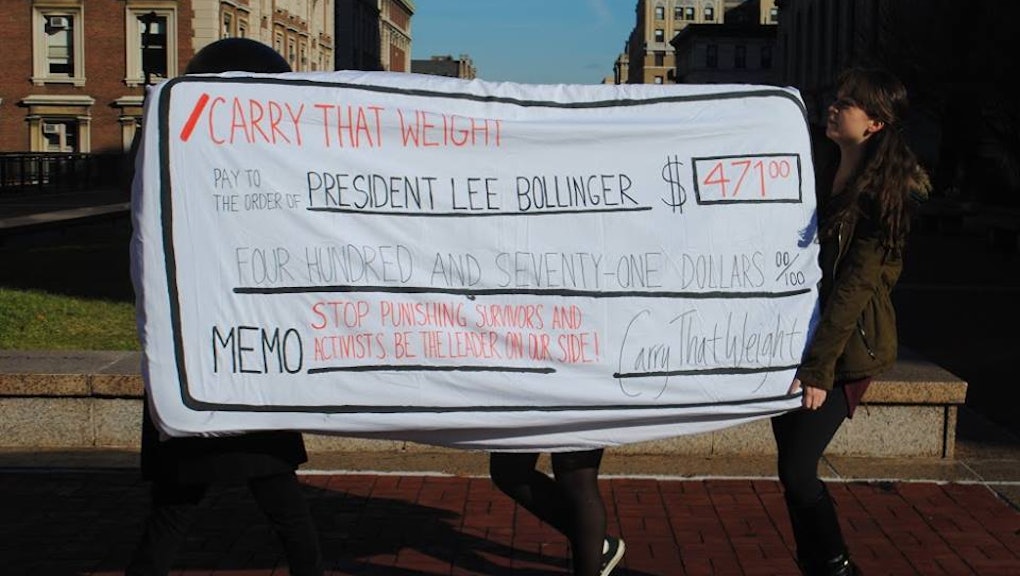 A picture's worth a thousand words. But what about a mattress?

After being hit with a bill for costs associated with their protest of Columbia's alleged mishandling of sexual assault, student sexual assault activists took matters in their own hands and wrote school president Lee Bollinger a rather unusual check:

"Carry That Weight" is a movement that originated as a performance art piece by Columbia senior Emma Sulkowicz. Sulkowicz, a rape survivor and art student, pledged to carry her mattress to school every day as a powerful protest against the fact that her alleged rapist was never expelled.

This simple act has since become a national phenomenon, however, resonating on campuses across America. Throughout the fall, fellow students helped Sulkowicz carry her mattress all over campus. The protest culminated on Oct. 28 when the contingent delivered 28 mattresses on Columbia President Lee Bollinger's doorstep. His response? "Having the mattresses thrown in dumpsters and slapping us with a $471 fine," the group says on their Facebook page. "This shows that he would rather throw out survivors’ pain than acknowledge the harm his administration has caused. It's reprehensible to make us pay for the trauma that we have endured."

"Today, we delivered this mattress 'check' to President Bollinger's office and read a statement in protest of the fine. It's time our president prioritizes students' safety over the reputation of this institution. Stop punishing survivors and activists and help carry that weight President Bollinger!" the activists wrote on their Facebook page on Monday.

According to Jezebel, the protesters haven't heard back from the administration, but Erin Gloria Ryan received a statement from officials noting that they "support students in peaceful protest" and that the fine protesters received was just the cost of "facilitating student events," which — perhaps in response to negative publicity? — the school ultimately decided to underwrite.

So in other words, you're welcome. We gave you a discount, now get the hell off our lawn.

The "check" mattress, like all the other ones, will probably be thrown out, but its symbolism will undoubtedly live on. Sulkowicz, along with 23 other female students have filled federal Title IX complaint against Columbia because of the school's failure to properly handle rape charges. The mattresses can be discarded easily, but those accusations won't. It's fair to say that dealing with mattresses is likely to be the least of Columbia's problems right now.