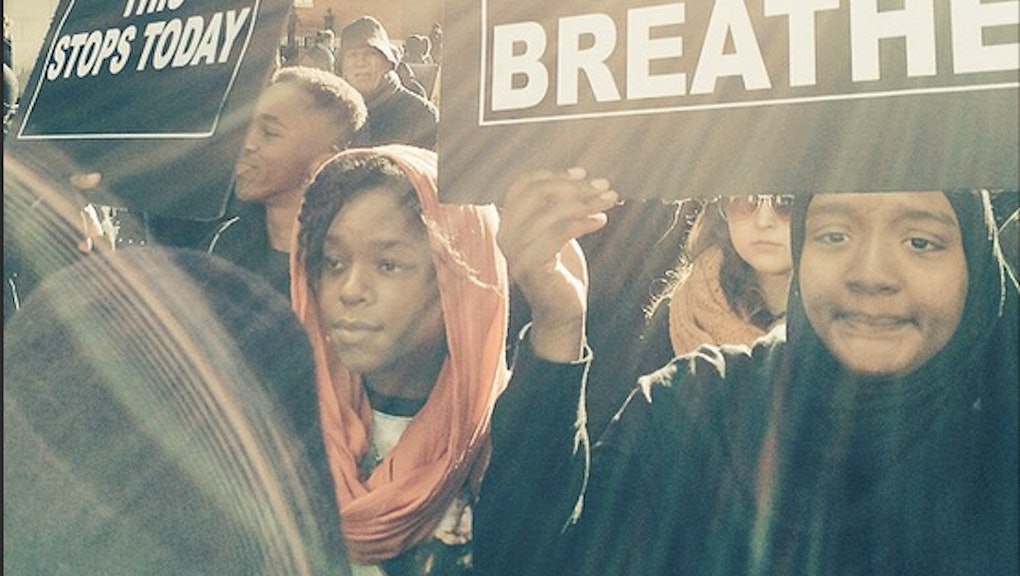 Want to Become a Better White Ally? Here's Where to Start

I spoke to a handful of journalists of color who had important advice and resources for people who wish to become active supporters of the racial justice movement. Here's some of the advice they had for white folks looking to get educated and informed to become more useful allies.

Ko Im, a writer in New York City, says to start with the basics: "Charles Blow at the New York Times is a great place to begin for white folks looking to read up on issues." Her advice? "If you try to place yourself in someone's shoes, it's a great first step. Might not be able to fully emphasize, but at least sympathize."

Jacqueline Keeler, the Native American activist who spearheaded the campaign to get the Redskins to change their name, believes that it is white folks' duty to inform themselves about other cultures. "I think the number one thing I would remind our allies is to listen to us and to educate themselves on who we are: citizens of sovereign nations that persist within the boundaries of the United States," she told Mic. "My favorite books to suggest are written by relatives: Vine Deloria, Jr.'s "Custer Died for Your Sins", "Speaking of Indians" written by great-great Aunt Ella Deloria and "Big Horse the Warrior" written by my great-Aunt Tiana Bighorse. It shows the variety of Indigenous experiences (I am Dakota and Navajo) and our fight to remain free from the late 19th century to the late 20th century. These are my bibles and I hope to add to them. In general, I'd say read Native American writers." Keeler says that ally-ship is a "hallmark" of Native American cultures and that her father's tribe's name in Dakota actually means "allies."

Contributing opinion writer at the Guardian Syreeta McFadden suggests white folks participate in marches, protests and events. "[Saturday] there's a rally of a bunch of poets at Washington Square Park [in New York]," she told me. She also suggests people check out the #BlackPoetsSpeakOut Tumblr for updates and videos.

Mic's Derrick Clifton thinks listening to the new D'Angelo album should be on everyone's to-do list this December:

"Even though it took him a decade to finish the album, it couldn't be more timely and pointed in capturing the range of emotions that run deep with a lot of people who are out in the streets, who are raising their voices about the struggles they face as black people." (Read his piece on why.)

Clifton recommends following Jesse Williams' Twitter feed, because it's "full of necessary and witty commentary on race relations in America." He also says to go to see the upcoming movie Selma.

"It's not only super timely, it helps give context to a wide variety of people about the legacy of the civil rights movement and how many of those struggles still resonate with black Americans today," Clifton said.

Zak Cheney-Rice, who was on the ground reporting in Ferguson, Missouri, for Mic, thinks every police officer should see Selma. (Read why here.) Cheney-Rice is also a big fan of writer, journalist and educator Ta-Nehisi Coates.

"Read pretty much anything he writes, but that 'Case for Reparations' article is especially important," Cheney-Rice said. "Michelle Alexander's book The New Jim Crow and Isabel Wilkerson's The Warmth of Other Suns should be read by everyone."

Raquel Reichard, who, full disclosure, is my editorial assistant and who also writes for Mic, believes it's all about filling your social feeds with important and yet accessible commentary on race issues.

"Of course I'd love for everyone to know about and read the works of Gloria E. Anzaldúa, Audre Lorde and so many other bad-ass WOC scholars," she said. "But that's not always the best entry for people who are just getting into racial justice. That's why I'm all for the accessibility of Twitter and the people on there. Great handles to follow, I'd say, would be @BlackGirlDanger, @rosaclemente, @aurabogado, @baddominicana and @SueyPark, among so many others. They always keep it 100, and if you're going to be an ally, a true ally, you have to be able to listen and accept what these women are saying, without getting your feelings hurt. It's not about you, and they will make sure you know that."

"However, I also think it's important to see what good allies look like. There are 'allies' who call themselves racial justice advocates and really, in their work, perpetuate racism and hierarchical thinking. So I'd also encourage folks to follow people who can show them what good allyship looks like, people like @utt_jamie and @fyeahmfabello," Reichard said.

It's also important to support those whose work often goes unacknowledged. "One of the more beneficial things about the Internet is that it has elevated many voices that have long struggled to find a platform," Patricia Valoy, writer and co-chair of the New York chapter of the Women's Information Network, told me. "Anyone who is interested in racial justice and truly wants to be there for people of color needs to think beyond mainstream media."

"The real work is being done by people with boots on the grounds and megaphones in the streets," Valoy said. "We need to support organizations that provide firsthand resources to people of color, organizations like AF3IRM, Sister Circle Collective, the Audre Lorde Project, Ya-Ya Network, Black Girls Code and the Sylvia Rivera Law Project, among so many others. These organizations provide people of color with options and alternatives; they don't just talk about the issues. These are the organizations white allies should be supporting."

Anushay Hossain, a journalist at Anushay's Point, believes it's all about hitting the books. "I think the best why white people can educate themselves to become better allies is to read The Souls of Black Folk by W.E.B Du Bois. Even though I am a woman of color, reading this book made me view American society in a totally different light."

Hossain explained that although it's a book that was written a long time ago, it's still relevant. "It is a groundbreaking work on race relations and I cannot tell you how many times I quote it to myself or in my work. Even though it was written in 1903, so much of the core of the work still rings true today, sadly," she told me over email.

Bridget Todd, social media editor at MSNBC, suggests But Some of Us Are Brave: All the Women Are White, All the Blacks Are Men: Black Women's Studies by Gloria T. Hull, Patricia Bell Scott and Barbara Smith.

"This book gets to the heart of what it means to be a black feminist. Even the title gets it spot on. When people talk about women, it's assumed they're talking about white women. When they talk about black people, it's assumed they mean black men. The essays in this text richly illustrate what it's like to feel doubly overlooked," Todd said.

If you aren't already following the people quoted in this piece, do it now. Their Twitter profiles are linked to their names. Read up on their work, share their pieces and ask them how you can help. It's up to you to educate yourself.