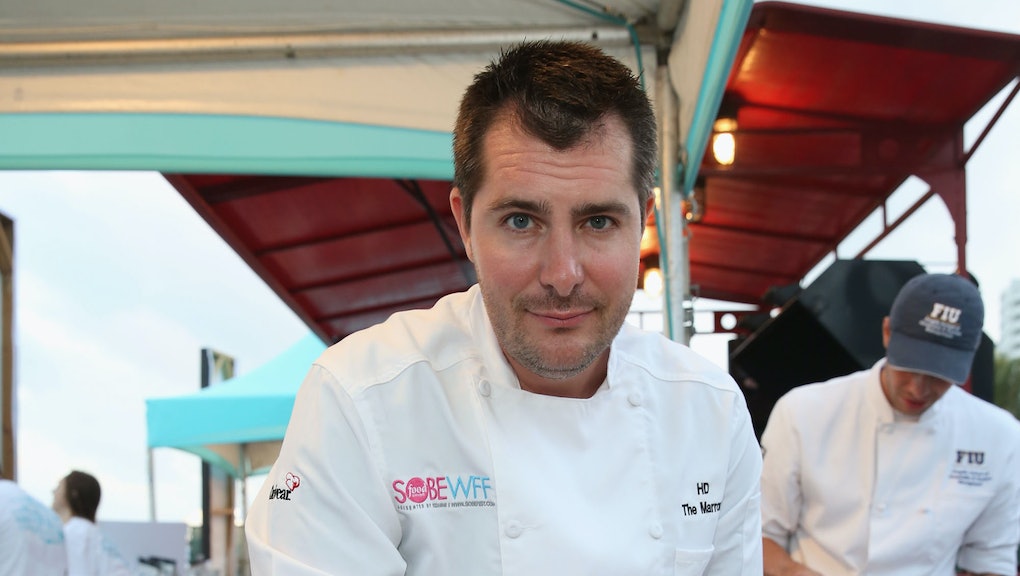 Top Chef Season 1: Where are they now? A look back at the inaugural cast

"What does it take to make it as a chef?" narrator Katie Lee Joel asks in the opening scene of Top Chef, circa 2006.

"It's hard to get recognized," Tom Colicchio answers, as B-roll from restaurant kitchen with the flames glaring and line cooks chopping plays on screen. "You have to have solid credentials before you can get your own kitchen." While the credentials of Top Chef's inaugural cast ranged from self-taught cooking teacher who'd never set foot in a restaurant kitchen to a 24-year-old sommelier from Las Vegas to cooks who were actually known in their home cities, the cooking competition completely revolutionized how we recognize food talent across America.

Over a decade later, the completely made-up title has become one of the most coveted among chefs and food lovers alike, but what has become of the first season contestants? We caught up with the chefs to see what they're up to (hint: Brand sponsorships).

The first to be eliminated on the very first episode of Top Chef for tasting his sauce with a finger instead of a sanitary spoon (we've seen this result in less harsh punishment as the seasons have progressed), Lee has somehow managed to remain completely inconspicuous on the Internet. Grubstreet confirmed he was MIA as of 2008 though we have evidence of his existence from a pasta class he taught in California in August 2015. Watch him surprise us with the best restaurant of all time. Maybe.

It's nearly impossible to watch an episode of Top Chef without being reminded of what vehicle they're driving to what supermarket to buy groceries to took in that special brand of cookware to be judged by a very important someone representing a very important food brand. Though she was the second contestant to pack her knives and go, Hamptons-based Sestito has still reaped in the show's publicity benefits: Partnering with Grey Goose to create a farm-to-table feast circa 2011 and running her own catering company, CYNFUL Food. And don't you forget that she was Beyoncé and Jay Z's private chef. She even prepared in-flight meals for the couple on a trip to St. Barts. Girl has it good.

Chef Brian Hill's website refers to him as a celebrity chef, which should truly be an inspiration to us all. He currently works as a private chef in Beverly Hills (former clients include Mary J. Blige, Mariah Carey and Eddie Murphy) and has served as a guest celebrity judge on MasterChef and MasterChef Junior, which must hurt Tom Colicchio's feelings. Or not.

Next eliminated: Candice, who has perhaps enjoyed more fame than any other contestant on these season. So famous is she now, that she was unable to answer our questions on her whereabouts, though her lifestyle website and publicist shared some scoop. Since appearing on Top Chef, Kumai has been dubbed "The Clean Queen." She has written four cookbooks including "Clean Green Eats," "Clean Green Drinks" and "Cook Yourself Sexy," with her fifth to be published in 2017. Kumai has made countless media appearances and brand endorsements.

This contestant has all but disappeared, with all of her social media accounts but does still have a web identity via her website. Parks wrote a book entitled "If You Wanna Get a Man, Learn How to Cook Book" which is currently available on Kindle for $9.99. The e-edition has a five-star Amazon rating.

Following her Top Chef appearance, Beaman has stayed out of the restaurant scene and launched her own healthy lifestyle website, AndreaBeaman.com, where she shares recipes, tutorials, articles and advice on holistic living.

Chef Miguel is another cheftestant who as all but disappeared from the public eye. We were not able to reach him via his AOL email address and his website seemingly hasn't been updated since 2006. Morales' LinkedIn profile indicates that he works as a Banquet tournant at the Mandarin Oriental New York, where he has worked since 2004, before he was the top chef "Fan Favorite" as his profile also indicates.

Following his Top Chef appearance, the 24-year-old sommelier from Las Vegas raked in the chips, with a Nespresso partnership we can only assume was a lucrative result of appearing on a Bravo reality series. In early 2008, Asprinio opened his first restaurant, Forté di Asprinio in West Palm Beach, Florida, but by December 2008 he backed out of the already highly acclaimed restaurant for murky reasons. The restaurant dropped his last name but closed shortly after. If you do want restaurant advice, however, you can consult SA Hospitality Enterprises, Asprinio's restaurant consulting business based in New York City.

After being voted off the island, the upstate New York native continued her role as executive chef at New York's French Culinary Institute and became a supervising culinary producer on future seasons of Top Chef. In 2010, she beat chef Marc Forgione competing on Iron Chef America with Halloween candy as the secret ingredient. And in 2013, Wong relocated from New York to Honolulu, where she opened her first restaurant, an island-style brunch house called Koko Head Cafe. In case you missed that, Wong runs a restaurant that serves dumplings and egg sandwiches all day, (almost) every day, in paradise. Turn off your TV and go there.

"Top Chef just opened so many different doors," third place winner Dave Martin said. "Now I'm old, it's old," he laughed. "I used it as a platform to create opportunities for myself." After only cooking professionally for about two years, Martin leveraged his experience and publicity from the show to move to New York, where he still consults for restaurants and major food brands. Top Chef taught Martin who he was as a chef, encouraging him to focus on what he likes to make and eat: Comfort food.

"Don't be anything you're not... I don't have to make some fancy bullshit thing," Martin said of his passion for making tasty, comforting dishes from various cuisines. Lately, he's been making pizza and experimenting with different doughs, inspired by a recent trip to Italy.

Though Martin doesn't keep up with Top Chef (other reality shows occupy his time), his friends fill him in on the new seasons and he still embraces the most important lesson he learned while filming the show. "You have to treat people with respect," he said. "It's just cooking. We're cooking, we're not saving lives. I'm still nice and friendly and humble and I can cook. Don't be an asshole... unless you're a brain surgeon, saving lives."

"At the time, we had no idea how big it would become, we were't even sure that this would air," Tiffani Faison laughed over the phone, recounting her first season on Top Chef. "Had it not aired it would have been an entirely worthwhile experience," she said, noting that no other time in life did she get the time to worry about nothing but cooking.

"There's something really interesting on appearing on the first season of anything," she said. "We didn't know what it would be... we didn't know about 'restaurant wars' or the other challenges." Since being named Top Chef's first-ever runner-up, Faison has cooked at a variety of restaurants, eventually opening her own restaurants in Boston: Sweet Cheeks Q in 2011 and Tiger Mama in 2015. Though she definitely doesn't regret appearing on Top Chef because she had fun and "learned a lot," Faison, who spends most of her time working or researching, not watching TV, no longer watches the show. "It feels so stressful to watch – it's hard!"

When he's not tweeting about sports or being caught by the food media paparazzi, the very first winner of Top Chef is in between projects. After closing his two beloved New York City restaurants, Perilla and Kin Shop at the end of 2015, the very first Top Chef became a dad that following January. We do not know what's cooking up for Dieterle during fatherhood, but hopefully it's something delicious we all can try.