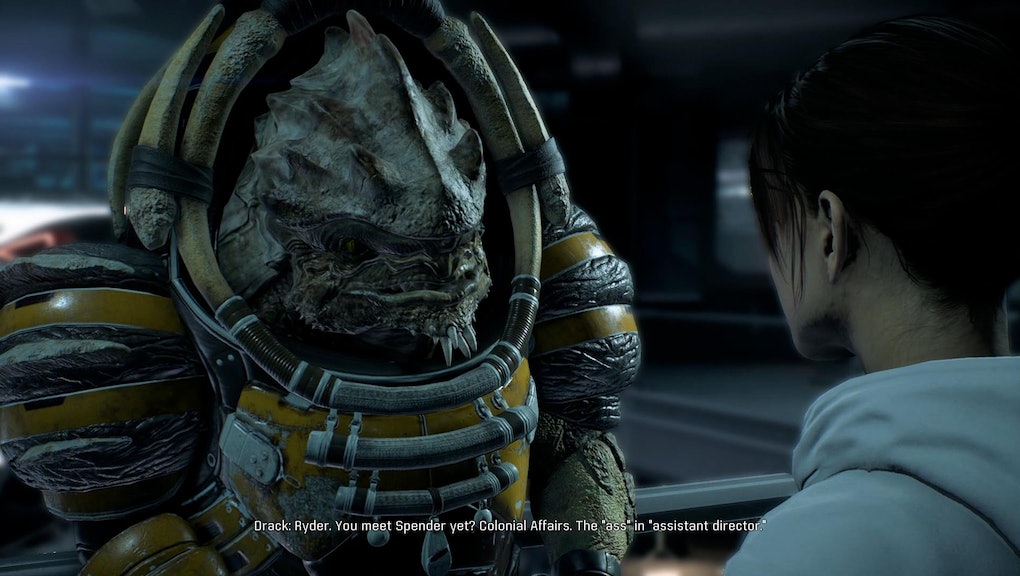 In Mass Effect: Andromeda, you'll complete several missions to earn the trust of your crew. These loyalty missions, which also existed in prior Mass Effect games, are a hallmark of fans' love for the franchise. One especially memorable mission involves Drack Nakmor, your Krogan squadmate.

You'll need to investigate a suspicious personnel member and get to the bottom of a potential betrayal job. Here's how you can complete the "Krogan Betrayal" mission and right the ongoing wrongs, according to Polygon.

At some point after Drack joins your team on the Tempest, he'll start sending you personal emails you can check using your console.

A conversation will eventually begin involving a higher-up named Spender, who's been lying during the Krogan uprising — and now, he's been making the wrong people angry. Drack has a bad feeling about Spender, especially from his interactions with Drack's granddaughter, Kesh. He's going to recruit you to help him figure out exactly what's going on.

After you receive your first email and chat with Drack about the ne'er-do-well, you'll want to head to the Nexus and follow your navpoint to find Spender in the docking bay. Talking to him will show you right away what kind of person he is. After you're done, talk to the Salarian he was speaking with before you came down. Then, talk to Kesh and see what the deal is. You'll be given a chain of directives in which you need to find a character and speak to them; keep going until you're given the objective to "investigate Spender's Kandara connection."

It seems Spender's been a bad boy, and you'll have to head to the planet Kadara to look further. Once you reach the planet, follow your navpoint to get where you need to go. On your way there, you'll have to fight off a good amount of Kett.

When you get to the hideout, look around for a datapad near the top floor. Reading it will give you directions to get back to Nexus, of course. Plot a return course and head to Spender's quarters, which will be marked on your HUD.

Once you get to Spender's room, use your scanner on an item behind a TV on the right side of the room. It will reveal some important information about which you'll want to talk to the nearby comms officer. Once you've done so, you'll want to head back to the Tempest to speak with Drack again. He'll send you to the planet Elaaden, so head there to progress to the next segment of this loyalty mission.

When you reach Elaaden, head over to the greenhouse. Talk to Hark and travel to the next area that's marked on your HUD as a navpoint. It's the Krogan settlement, and you'll have to work through it. It's a bit difficult to navigate, so here are some helpful directions: Go inside and take a right to find the settlement's main door. You should see some stairs on the left side, so take them down. Turn right twice to go down some additional stairs and follow the hall to reach the greenhouse.

You'll have a short conversation, and then it's time to fight. Make sure your party is at least level 20 before proceeding, because there's a massive firefight you'll need to get through to reach the Krogan transport. Once the fight is over, walk all the way to the end of the hallway to find another stairwell.

Run to the right, climb up and use the grate to drop down into the next area. When you turn right, you'll be met by a group of pirates. When you get to a blocked hallway, Drack will pitch in and you'll eventually reach more pirates. Kill them off. Find an exit door on the left side of the room and head upstairs. Take the exit door on the left side and head up the next set of stairs — it's time to rescue Vorn from his captors! Some additional pirates are in dire need of being blown away.

When you finish off the pirates, you'll be left with the last firefight of the mission. You'll fight wave after wave of pirates until the final wave, where some mech suits are dispatched. Aim for the red "eye" areas in their chests and dump everything you've got on the enemies to emerge victorious. Take care of the docking clamps and watch the fireworks when you're done. You'll successfully earn Drack's loyalty.

There are a few other things you need to take care of first, however. After you watch all the scenes play out, you'll need to return to the Nexus and review the evidence you've found against Spender. He'll need to be dealt with after speaking with Drack on the Nexus, the results of which I won't ruin here for your viewing pleasure.