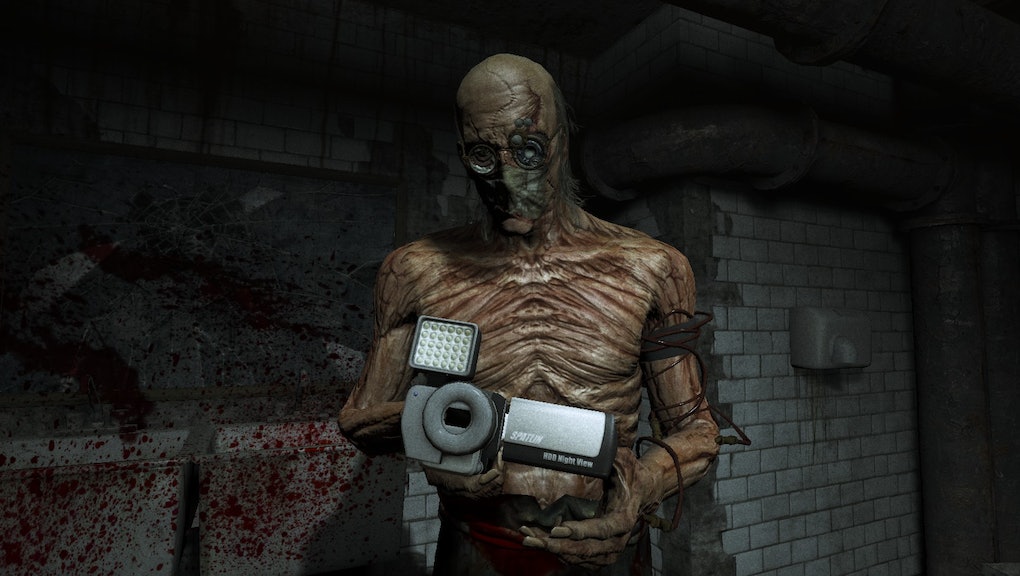 Outlast 2 is a first-person survival horror title set to take players on a wild ride through a rural area Arizona as they investigate the gruesome attempted murder of a pregnant woman found on the side of the road. It's not a story for the squeamish, as it's chock-full of blood and gore, and an intriguing mystery that involves some extremely bizarre happenings. The whole game is on the weird side, and the plot as explained below will help you make sense of it.

If you're looking to make sense of it, we've got all the details you need here (via Outlast Wikia and personal experience) to understand what's going on in Outlast, Outlast: Whistleblower and Outlast 2, though you don't need to have the story of the previous two games explained before heading into Outlast 2.

Note: Major spoilers for the Outlast series will be found below.

The original Outlast found players taking up the role of investigative journalist Miles Upshur as he infiltrated the dilapidated Mount Massive Asylum, abandoned and brimming with deranged patients and the mutilated corpses of the staff that previously worked there. The hospital had been in the spotlight for the unethical treatment of patients, ignored and goaded on by the malevolent Murkoff Corporation. Former patients, as Miles found out, were still roaming the hospital grounds and killing Murkoff employees, but Miles was forced to continue exploring to get to the bottom of things.

Miles ended up discovering the schizoaffective priest, Father Martin Archimbaud. Father Martin claimed Miles was the "apostle" and captured him, cutting him off from escaping the asylum and its deranged patients so he could show Miles who was really to blame for all the deaths and the asylum's remains. The real cause was a bizarre, enormous creature called the "Walrider."

Miles found out that the Walrider was actually created by Dr. Rudolf Gustav Wernicke, a German scientist who was responsible for testing a form of dream therapy out on patients so he could connect a bunch of tiny nanites together into one single being. That's essentially what the Walrider itself is: controlled by a patient of Murkoff's experiments who was still alive, but in a comatose state. Miles hoped to take the patient, Billy, off life support to keep the Walrider from killing again, but was unsuccessful. Eventually, the Walrider took control of Miles after killing him and began using him as its new host. This is where Outlast ends.

Outlast: Whistleblower followed software engineer Waylon Park as he worked for Mount Massive Asylum by way of Murkoff. He was responsible for keeping the Morphogenic Engine, or the tool Dr. Wernicke used for lucid dreaming testing in comatose patients, running smoothly. He ended up being the person to send the email to Miles Upshur about the experiments and strange happenings at Mount Massive in the first place, detailing torture and other unethical treatments for patients at the hospital.

Though Park had sent an anonymous email, he ended up being found out by his supervisor Jeremy Blaire. Blaire was about to force Park into the Morphogenic Engine as punishment, but in the furor with the Walrider destroying the Asylum, Park was able to escape the situation and recorded some important footage as he tried to escape the asylum. On his way out of the asylum, Park saw several grotesque goings-on, such as a patient named Eddie Gluskin, referred to as "the Groom," who wanted to create the "perfect bride" by mutilating male patients' genitals.

Park was almost up next for the Groom before escaping, and he eventually makes it out of the hospital alive to upload files that would destroy the Murkoff Corporation. The game ended with him sending the files away to bury Murkoff, despite the implication that it would more than likely destroy his life, as well as his family's.

Outlast 2: What happened to Lynn?

Outlast 2 remains in the same universe as Outlast and Outlast: Whistleblower, but it follows different characters and a different plot line altogether. Players follow Blake Langermann, a cameraman who works alongside his journalist wife, Lynn Langermann. The pair are investigating the murder of a young pregnant woman who has yet to be identified. The Jane Doe victim investigation ends up with the pair crash-landing in their helicopter in the Supai region of the Sonoran desert in Arizona. Blake is separated from Lynn and must find his way back to her, all the while exploring a village in a rural area where the residents are concerned that the end of days is finally upon them.

While looking for Lynn, Blake finds the helicopter pilot skinned and impaled by a tree limb, which obviously didn't happen in the crash. This alerts Blake to the fact there's something clearly wrong happening where they've crash landed. A fleet of hostile villagers encroach on Blake and try to kill him before he's reunited with Lynn, but unfortunately, the nightmare has only begun. Lynn has become entangled with the self-described prophet Knoth, who insists that Lynn is pregnant with Blake's child, who is supposedly the antichrist. Thus begins a manhunt to track down Lynn and kill her before the child can be born.

The resulting clash between two cults, one with Christian beliefs and one with Christian beliefs with Satanic leanings, with Lynn being taken away from Blake and Blake being left to find her and continue to investigate the happenings. It turns out that the pregnant woman who was murdered was the prophet Knoth's daughter, sexually abused by Knoth and ended up pregnant.

During his travels, Blake meets up with a midget archer named Laird and his partner named Nick, kidnapped by Laird, who has pronounced Blake the "Scalled Messiah." To become said Messiah Laird wants Blake to be "rebirthed." This involves Blake being nailed to a cross to be left to die. Not long after, he begins hallucinating. By the end of the game, Blake's hallucinations have gotten worse by a wide margin, and though he's reunited with Lynn, she ends up birthing her child and dies not long after that.

The prophet Knoth suggests that Blake should crush the child's skull and then kills himself, leaving Blake with the child. We aren't given any insight into what happens with the child, or what's going on with Blake's hallucinations beyond the idea that he's possibly gone crazy, all the way this time.

Thanks to the bright flashes of light throughout the game, part of Murkoff Corporation's brainwashing program, Blake and company have continued to be exposed to the light and have thus been given additional doses of the mind control program from Murkoff's microwave signal sent throughout the land. This idea can be corroborated with the documents found throughout the game. It's also possibly why all the cults murdered each other and took their own lives earlier in the game as well. It's a rather bleak ending, but it's a thrill ride to reach that point.

Now you can say with confidence that you know all about Outlast and its happenings. Make sure to let us know your own theories on what happened with Blake at the end of the game when you get there!