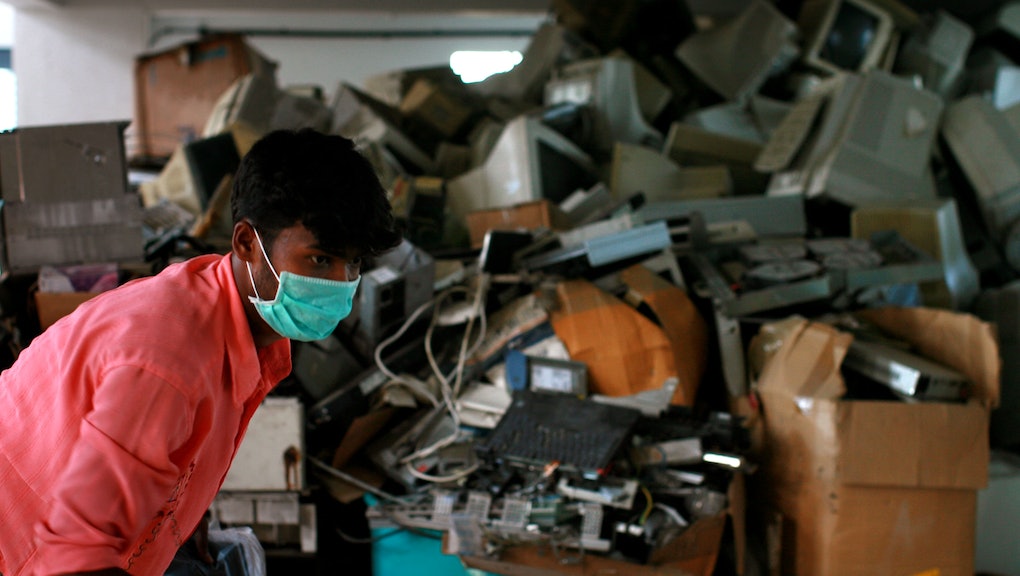 Given that the average smartphone has a life expectancy of less than five years, it's no wonder landfills are getting stuffed with old, battered iPhones and stray computer parts. In fact, people across world have created nearly 42 million tons of electronic waste in 2014, according to a report from United Nations University in Japan. A large portion of that waste is likely dumped: In 2011, for instance, about 70% to 80% of electronic waste went straight to landfills, according to Wired.

Electronic waste is a serious danger to humans, animals and the environment. The waste releases toxic chemicals like lead, and it's already endangering the health of people in countries including India, Pakistan, Vietnam, Ghana and the Philippines, where there are informal recycling industries dedicated to burning and dismantling these abandoned parts. Recycling printed circuit boards has led 80% of children in Guiyu, China — one of the world's largest recycling sites — to suffer from respiratory ailments, and one study found that nearly 82% of Guiyu children had blood lead levels higher than normal. Mostly women and children work at these digital dumping grounds, and they make only about $1.5 a day.

But now, a group of scientists in California are trying to fix that problem with new biodegradable circuitry. With a little bit more development, this means that things like electronic sensors — which let your Apple Watch detect your pulse, for example — could basically melt into the ground someday, without releasing toxic chemicals.

"Our motivation is that we know we are seeing an increasing amount of electronic waste in our world, so how to deal with this electronic waste is a critical issue," Ting Lei, a researcher at Stanford University, said in a phone interview.

To prove that it can indeed biodegrade, scientists dumped vinegar on the device, which somewhat mimics how soil can slowly decompose devices. They mostly built the circuitry using low-cost polymers made from natural resources such as carbon, nitrogen and hydrogen atoms.

"It can dissolve into low-toxic, organic compounds," Lei said. He estimates that it will take another three to five years before the circuitry can perform as well as conventional types and hit the consumer market.

In the meantime, things are only expected to get worse — one report estimates that electronic waste will increase from nearly 42 million tons in 2014 to about 50 million in 2018.

For now, there's just a glimmer of hope that, in the future, electronic waste and its damaging effects can be cut down.