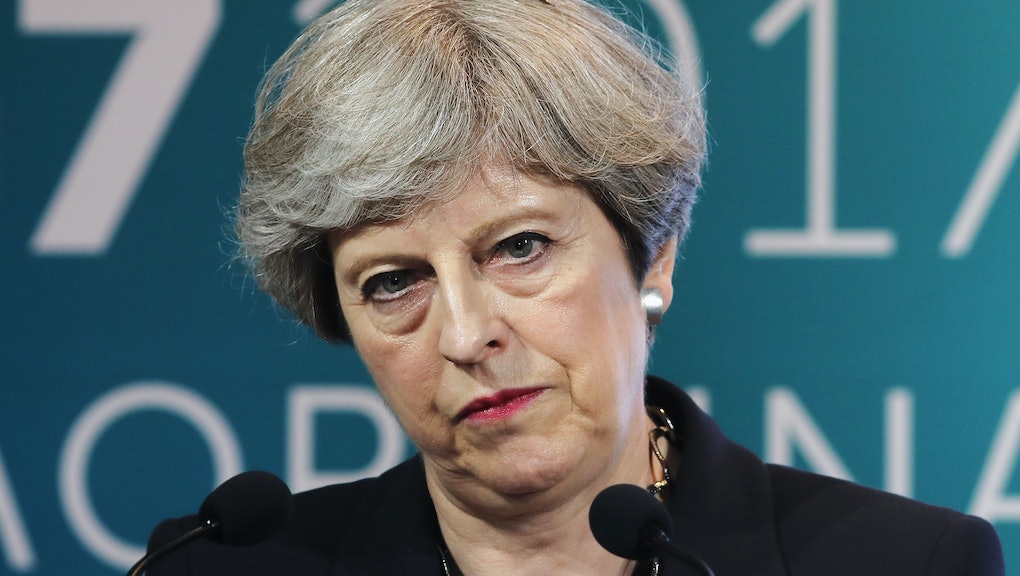 Twitter, Facebook and YouTube have been working with counterterrorism agencies for years to develop policies policing the spread of terrorist propaganda on their sites, but U.K. Prime Minister Theresa May wants them to do more.

May lashed out at the top tech companies on Sunday for not doing enough to combat extremist ideology in the aftermath of Saturday's London Bridge terror attack.

"We cannot allow this ideology the safe space it needs to breed," the prime minister said. "Yet that is precisely what the internet and the big companies that provide internet-based services provide."

In the wake of May's criticism, the tech companies are defending the work they say they've done to combat the spread of extremism in recent years.

After the November 2015 terror attack in Paris, ISIS supporters on Twitter celebrated with the hashtag #ParisIsBurning. Twitter responded by suspending 125,000 related accounts. Since then, Twitter tells Mic it has developed sophisticated, automated internal spam-fighting tools to stop terrorist propaganda.

"We continue to expand the use of technology as part of a systematic approach to removing this type of content," Pickles added. "We will never stop working to stay one step ahead and will continue to engage with our partners across industry, government, civil society and academia."

"Using a combination of technology and human review, we work aggressively to remove terrorist content from our platform as soon as we become aware of it," Milner wrote in a follow up statement, according to CNBC. "If we become aware of an emergency involving imminent harm to someone's safety, we notify law enforcement."

Encouraging open dialogue while policing the spread of extremist ideology has proven to be a tough balancing act.

Reports surfaced Monday indicating that at least one of Saturday's terrorist attackers may have become radicalized watching YouTube videos of Islamic Shakh Ahmad Musa Jibril, a U.S. citizen of Palestinian descent who's one of the two most prominent spiritual authorities for ISIS fighters online, according to a 2014 report from London's International Centre for the Study of Radicalisation and Political Violence.

Jibril's sermons are featured in dozens of YouTube videos on multiple channels. His personal YouTube channel, which hasn't been active for about two years, has just over 16,000 subscribers, but his videos there have been viewed more than 1.5 million times.

The problem is Jibril's popularity among ISIS fighters doesn't mean all of his rhetoric is overtly hateful or promotes violence. Experts indicate that Jibril and others like him walk a fine line between innocuous dialogue and extremist rhetoric, which exemplifies the conundrum the tech community faces scrubbing terrorist propaganda from their sites.

William McCants, senior fellow on Middle East policy for the Brookings Institution, told the Wall Street Journal in 2015 that alleged ISIS supporters like Jibril "are very, very careful with their language."

"They are careful to go up to the line, but not go across it in terms of what’s legal for free speech,” McCants said.

The FBI has indicated that Jibril has advocated violence in the past. In 2005, the agency said he "encouraged his students to spread Islam by the sword, to wage a holy war" and "to hate and kill non-Muslims."

In a more recent report from 2014, London's ICSR noted that Jibril "does not explicitly call to violent jihad, but supports individual foreign fighters and justifies the Syrian conflict in highly emotive terms."

In response to questions about Jibril, YouTube pointed out most of the spiritual leader's videos are peaceful religious sermons detailing Islamic teachings on subjects like fasting and the limits of western medicine, none of which violates YouTube's guidelines.

"We take our role in combatting the spread of extremist material very seriously," YouTube said in an emailed statement. "YouTube has clear policies prohibiting terrorist recruitment and content intending to incite violence, and we act quickly to remove flagged videos violating these policies."

Jibril's popularity among ISIS fighters extends further than YouTube. In 2014, ICSR found 60% of ISIS fighters followed Jibril on Twitter. He was also the most "liked" spiritual leader on Facebook among ISIS followers.

Federal authorities have struggled to find legal justification to keep Jibril from speaking on social media without violating his First Amendment right to free speech. Such challenges may indicate why May called defeating extremist ideology "one of the greatest challenges of our time."

"It cannot be defeated through military intervention alone," the prime minister said Sunday. "It will only be defeated when we turn people's minds away from this violence."