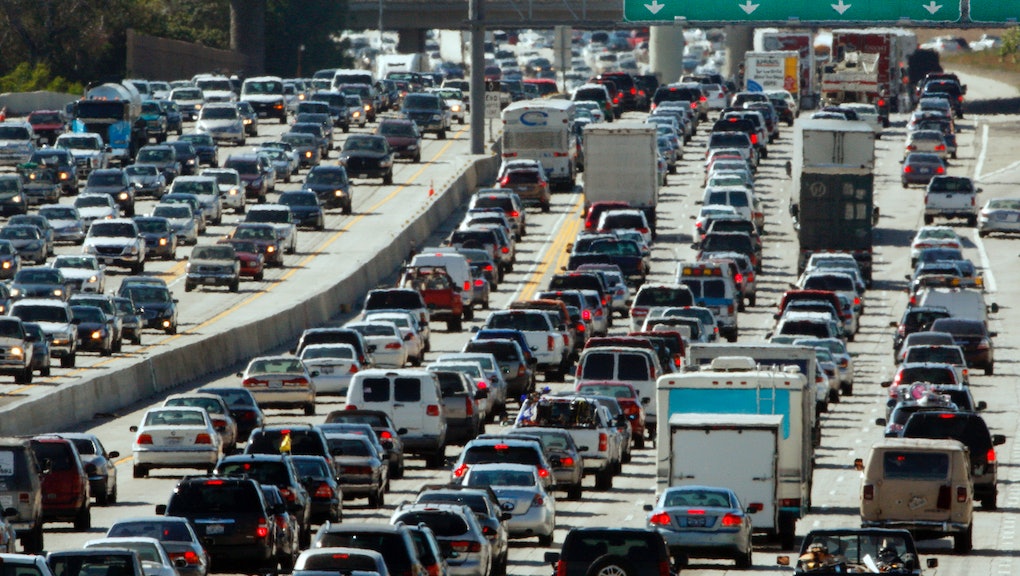 Musk first shared his idea to dig tunnels across LA on Dec. 17, 2016, when he became fed up with being stuck behind the wheel. “Traffic is driving me nuts,” he tweeted. “[I] am going to start building a tunnel boring machine and just start digging.”

Now, on Dec. 4, Musk and the Boring Company updated his vision by releasing a conceptual map of proposed tunnel routes for Los Angeles.

The first phase of construction would include a 6.5-mile, proof-of-concept tunnel between West Los Angeles and Inglewood (an excavation permit application has already been submitted, the Boring Company said). Other routes would then be added across the city, stretching to all well-touristed corners, including Santa Monica and the Dodger Stadium.

But Elon Musk’s vision won’t become a reality without overcoming a long process of bureaucratic red tape. If it does happen, it will likely look something like this: Cars will sit on electric skates that carry them at high speeds through underground tunnels. An elevator-like lift will bring them from the street level to underground, along with autonomously-driven pods that may carry 8 to 16 passengers at a time.

It sounds cool and looks futuristic, but “I wouldn’t expect it to do anything measurable to reduce what congestion is like on the existing roadways in Los Angeles,” Juan Matute, associate director of the UCLA Institute of Transportation Studies, said in a phone interview.

“That doesn’t mean it wouldn’t speed up Elon Musk’s commute or the commute of others who use it,” he added, “but there wouldn’t be any measured impact on the 405 and other congested freeways, or surface streets.”

The traffic problem in LA is bad — really bad. It actually ranks as the worst in the world, according to the 2016 Inrix Global Traffic Scorecard, which measured hours stuck in traffic across 1,064 cities. Within 240 commuting days, LA drivers spent an average of 104.1 hours behind the wheel in congestion during peak hours in 2016 (for what it’s worth, there were 261 work days on the calendar that year).

Surely, with a problem this severe, one could argue that it’s heartening to see all hands on deck — Musk’s included.

“I do like the fact that private sector dollars are being expended on mobility and the transit side,” Brooks Rainwater, director of the National League of Cities’ Center for City Solutions, said in a phone interview. However, he sees a very clear issue with these tunnels of high-speed electric skis: “You’re still going to have a problem of induced demand and tunneling underground,” he said.

“Induced demand” is exactly why several transit experts have thrown cold water on Musk’s idea. It’s a well-documented phenomenon where increasing capacity for cars ultimately invites more cars on the road. In other words, many believe that traffic can’t be resolved by simply making more space for cars — which is what Musk’s tunnels will effectively do by removing a vehicle from the streets and turning it into an underground luge.

“That’s been the story in LA for decades. Over the past 15 years, we’ve had two projects — the last of which was over a billion dollars — to widen the 405 freeway,” Matute said. “It has had a really negligible effect on traffic. … That applies to a tunnel, a widened roadway — anything, really.”

Though the Boring Company’s selling point is its “fast to dig, low cost tunnels,” Matute said the real snag might be in the surface-street connection. Although tunnels can be dug deep underground, already-existing infrastructure can make constructing the car elevator a high-cost puzzle.

Matute estimated that the Boring Company’s map would cost about $50 to $75 billion to build, and said he believes that this wouldn’t be transportation for the common man. He estimated that prices to take Musk’s express tunnel system would conceivably be $50 or even $100 each way.

“$100 would not be unreasonable to try to recuperate the cost. That’s still eight or so dollars [in a 16-person passenger pod], when the metro fare is $1.75,” he said. “There are some people for whom it’d make LA a more viable place — Elon Musk and other people who have the money to spend $10,000 a year on these types of fees.”

Matute also said he believes that it would take 15 or more years to build the proposed network of tunnels on “an aggressive construction schedule.” Rainwater, too, estimated 15 years — though he noted Musk has a track record for moving quickly on his many other ventures, like SpaceX and Tesla.

“Until we are seeing miles of tunnel laid down, I don’t think we really know the long-term implications of how quick this project would get done,” Rainwater said. “Ultimately, what’s happening is that we’re in this transportation mobility shift where there’s lots of wonderful new ideas explored, but we’re still only in that piloting and concept phase.”

“People who study transportation are waiting for the additional details,” Matute said. “This is highly unlikely to work. I would bet against it.”

Los Angeles is planning a serious transit makeover, though LA residents will still need to keep their patience. In 2016, the city introduced a sales tax hike that is expected to bring $860 million a year to projects such as subway line extensions, an all-new rail to Los Angeles International Airport, new bike lanes and an expanded bike-share system.

“I think the best foot forward for Los Angeles is exactly what they’re doing,” Rainwater said. “There’s been great investments by the residents of LA, in tens of billions of dollars, for long-term infrastructure transit projects.”