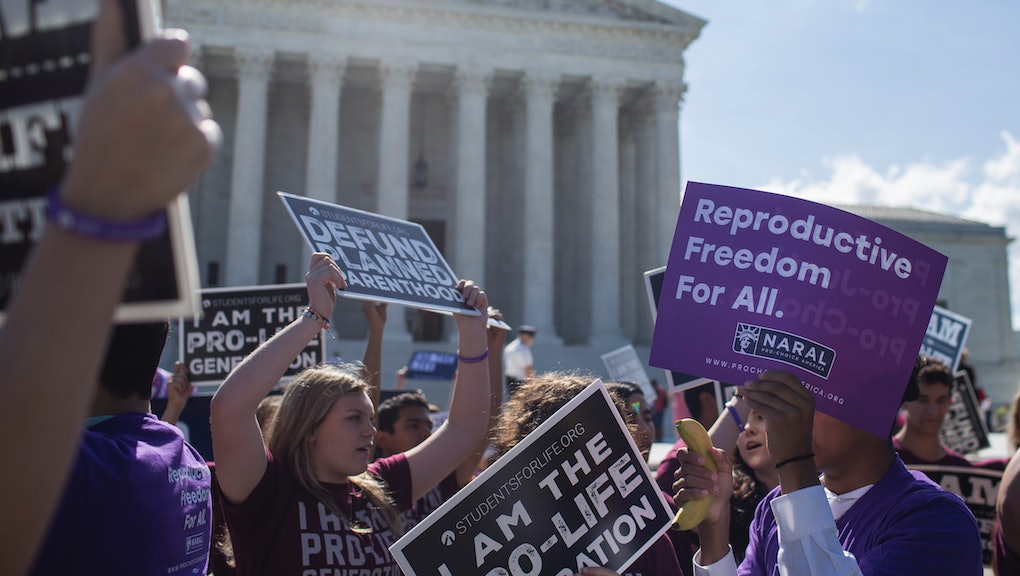 These states have “trigger laws” banning abortion on the books in case ‘Roe v. Wade’ is overturned

With President Donald Trump set to announce a nominee to succeed to Associate Justice Anthony Kennedy on the Supreme Court, the right to an abortion is under threat — and some states are already prepared for the change.

Kennedy’s retirement has led many to speculate that Roe v. Wade’s days as settled law could be numbered, as Trump’s likely conservative pick could provide the fifth vote needed to overturn the 1973 landmark ruling, in which the court held that the “right to an abortion fell within the right to privacy ... protected by the 14th Amendment,” according to Oyez.

If the Supreme Court overturns or severely weakens Roe v. Wade, it will be up to the states to regulate abortion — and it’s likely many states will take action. Several states are already poised to immediately put abortion bans into effect with “trigger laws” contingent on Roe v. Wade, while others have independently protected the right to abortion through their own state legislatures and constitutions.

“Either an overturning or an undercutting of Roe would mean that states have much more leeway in enacting restrictions on abortion to the extent that it could even make abortion virtually impossible to get, even if Roe isn’t completely overturned,” Elizabeth Nash, senior state issues manager at the Guttmacher Institute, said in an interview.

The four laws, each of which make performing or prescribing an abortion a felony, were passed between 2005 and 2007. Louisiana’s law, for instance, would punish anyone who performs or aides in an abortion with up to 10 years in prison and a maximum $100,000 fine.

“After the passage of Roe, a handful of states said, ‘If we can ever go back, we want to go back,’” Daniela Kraiem, associate director of the women and the law program at the Washington College of Law at American University, told Mother Jones in 2017. Kraiem added that “the point of those laws, up until now, has been largely symbolic,” giving states a way to “allow women to exercise their constitutional rights, but under protest.”

Such trigger laws would almost immediately take effect should Roe v. Wade be overturned. The South Dakota law is “effective on the date that the states are recognized by the U.S. Supreme Court to have the authority to prohibit abortion at all stages of pregnancy,” while the Mississippi statute takes effect 10 days after the state’s attorney general determines in writing that the Supreme Court has overturned the ruling.

The North Dakota law is more vague, specifying only that the “statute becomes effective on the date the legislative council approves by motion the recommendation of the attorney general ... that it is reasonably probable that this act [banning abortion] would be upheld as constitutional.”

The Georgetown Law Journal noted this means it’s possible the law could take effect even without the court specifically ruling on a challenge to Roe v. Wade, explaining that “anything that makes the attorney general more likely to conclude that it is ‘reasonably probable’ that courts will uphold the statute could serve as the trigger, including a change in attorneys general if the new officeholder were to have a more sensitive ‘trigger finger.’”

For some states, abortion bans enacted before Roe v. Wade are currently unenforceable but still on the books, meaning they could be revived should the decision be overturned.

According to the Center for Reproductive Rights, if a ban was never overturned or challenged in court, it’s possible state lawmakers could simply begin enforcing said law should Roe v. Wade be overturned. This could be the case for laws enacted in Alabama and West Virginia.

Other laws in Arizona, Arkansas, Colorado, Michigan, Oklahoma, Rhode Island, Utah and Wisconsin were completely or partially blocked by state courts based on Roe v. Wade. The CRR noted that officials in those states could file actions asking the courts to activate the bans.

Existing laws are also on the books in Massachusetts and New Mexico, although both states now protect abortion rights in their state constitutions and are more unlikely to revive the old statutes.

A number of conservative states are also likely to take action on abortion in the absence of Roe v. Wade, even if they don’t have laws already poised to take effect.

“Our shorthand for these are intent statements,” Nash said. “The state has a law that cannot be enforced, but it basically says something like, ‘The state intends to ban abortion to the extent allowed by the U.S. Supreme Court.’ And while those statements don’t have the force of law, they put down a marker that really say what the state legislature would like to do if [it] could. So those laws would require the state lawmakers to go back and pass an abortion ban.”

Even if they haven’t expressed an intent, however, a number of state legislatures are likely to adopt abortion restrictions or bans. Twenty-one states already have laws imposing bans on abortion based specifically on the age of the fetus, including Iowa’s restrictive — and currently blocked — “fetal heartbeat law” banning abortions after six weeks. States like Wyoming and Tennessee do not have specific bans in place but are controlled by anti-choice lawmakers likely to favor anti-abortion legislation.

The Guttmacher Institute has identified 29 states considered “hostile to abortion rights” based on laws that restrict abortion in some way.

While many states have taken steps to limit access to abortion, others have “taken the principles of Roe and put them into law,” Nash said.

Nash said this potential patchwork means that pro-abortion-rights advocates will have to “grapple with what it means to have accessible abortion across the country” in the absence of Roe v. Wade. While this will involve fighting against abortion restrictions, it will also require ensuring existing protections in more liberal states remain in place.