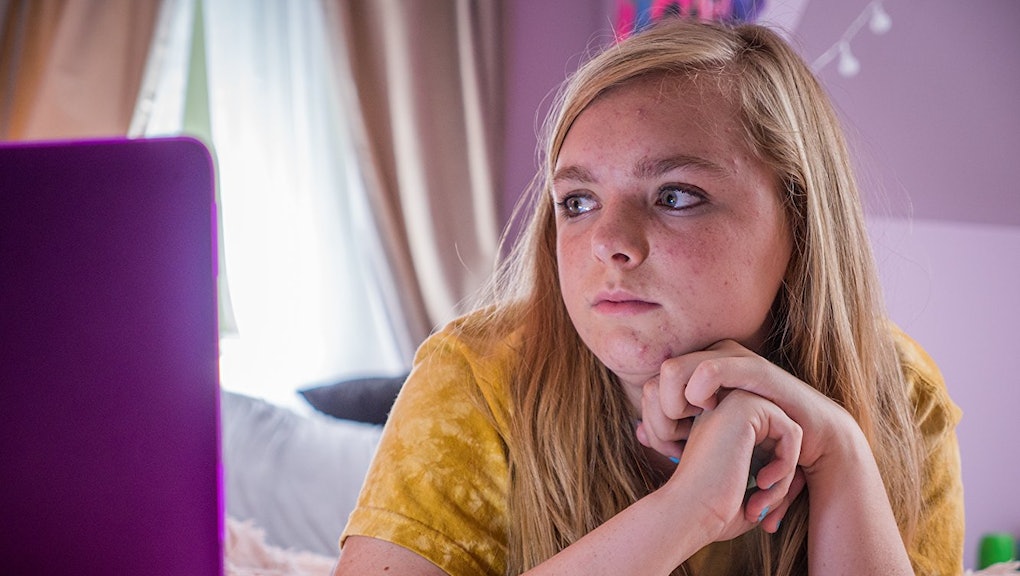 Elsie Fisher felt like an outcast while growing up in Thousand Oaks, an upper-class suburb just north of Los Angeles. She had social anxiety that led her to “act out and be very weird.” And because she didn’t have a lot of friends, middle school was isolating. “I thought my experience was very, very unique, but not in a good way,” the 15-year-old actress said by phone. “I’m like, ‘I’m the only person who feels weird and quiet and bleh.’”

And then came Bo Burnham. The 27-year-old comedian best known for singing irreverent songs about God’s perspective, Helen Keller and his family thinking he’s gay, cast Fisher as the lead in his directorial debut. The film, Eighth Grade, which opens July 13 and is getting rave reviews, follows an introverted girl named Kayla through a rocky eighth-grade in suburban New York. Everything is heightened: A crush moves in slow motion, a morning is spent manufacturing the perfect Instagram selfie and attending a classmate’s pool party produces unbearable stress. Like Fisher (and also Burnham), Kayla feels anxious and alone, and has to navigate dual social worlds: the IRL one and the one accessed through her screens and devices.

Playing a character whose emotional arc mirrored her own allowed Fisher to see herself from a distance. It gave her perspective — on her own anxiety, and also on teens’ dependence on social media.

“After filming and reading the script, I’m like, ‘Oh, everyone feels weird and quiet and bleh,’” Fisher said. “But I think the biggest thing the movie did for me in terms of social media and the internet as a whole is just make me think about it more. Because I feel like a lot of people don’t think about the internet. It’s just part of the air they breathe. It’s very addictive, and you don’t often think about your addictions.”

Mic spoke to Fisher about the ways that adults misperceive teens’ social media use, modern bullying and the pressure on young people to take part in social activism. This interview has been edited and condensed.

Mic: How closely did Bo get the experience of what it’s like to be an eighth-grade girl?

Elsie Fisher: He got it very well. He clearly did a lot of research. A lot of people ask, “Were you surprised that Bo, being an older man, wrote an eighth-grade girl so well?” But I’m not surprised. I only read the full script after I’d gotten the role and had gotten to know Bo a bit. And I truly saw it as him writing a person who felt the same things as him, just in different circumstances. So there wasn’t too much he had to look into. He could write from his heart, I think.

What kinds of insights did you learn from Bo?

EF: I don’t know if I got any insights. The thing I got more is just relating. We’re very similar people in personality, and he’s one of the few people I’ve met who really understands my level of anxiety, because he shares that. So it was more having someone to talk to about the things I’m feeling right now rather than him giving me advice on how to deal with the future. We were both kind of shrugging at the world, like, “I don’t know.”

Did talking to Bo in that way help?

EF: Yeah, it felt very nice. Because I’ve always been kind of an outcast at school. I guess everyone feels that way. But I never had anyone who understood what I was feeling. And it always felt weird to mention that stuff to my parents, so I never really did. It felt good to have Bo around and be able to talk about that.

Did you have any experiences with bullying in middle school?

EF: I have, though I don’t want to elaborate on that. But honestly, I think what the film shows — and it is true for me in a sense, too — is bullying now isn’t getting swirlies, it’s being ignored. That is essentially the new bullying. And that was very much me.

I feel like people are too afraid to be mean anymore — or not even afraid, they just don’t care enough, I guess. Modern bullying is like no one saying “hi” to you in the halls. Or you talking to someone and them ignoring you to your face. It’s not mean, but I think it hits harder than traditional bullying does. But you can almost sympathize more with the bullies, because if you think about it, Kennedy [played by Catherine Oliviere], who is the “mean girl,” she’s really not all that mean. Like, her mom invited this weird girl [Kayla] to her birthday party, and now this weird girl is trying to give her a letter. You can kind of sympathize and see things from her point of view.

I’m curious how central the internet is to teenagers’ lives right now.

EF: It’s kind of everything now. I mean, it’s nothing and everything at the same time. And that’s the awful and amaz — mostly awful [thing about it]. But [there’s] also a little bit of a wild contrast. Internally, you’re basing your entire life on how you’re perceived through the web. And that’s your place to present yourself. How do you think? Look? Everything.

It makes everyone more self-aware, and I don’t know if that’s good or bad. And it’s affecting young children’s brain chemistry. Because our brains are still developing, we’re the most susceptible to things that mess with them. And that includes things like drugs and alcohol and, I think, the internet. Because it changes the chemistry of how you think. You shorten your attention span and increase your need for information and approval.

And it’s also permanent. Do you think about how one bad joke could come back to haunt you later on?

EF: Oh, of course. I feel like I especially have to be aware of that, because that could ruin me. And that’s the crazy thing. Even things said sarcastically on the internet can actually ruin public figures’ careers entirely. And it’s understandable, because a lot of things shouldn’t be said. And I don’t have to think too hard about the things I say because I just don’t want to say offensive things.

You’re coming of age at a time when young people are leading the way on a lot of important social and political issues. I’m wondering if you feel any pressure — whether internal or external — to get involved?

EF: I do and I don’t. Of course, every time I see something come up I try to have an opinion on it and think about it and understand both sides of the issue. But at a certain point, I just know it’s better not to take a stance on things, even if that’s the right or popular way to think. There are other people who are more well-versed on these issues who have more thought-out opinions and could say things on the internet or in real life.

Is that because you’re not an expert or because you don’t want to alienate fans?

EF: It’s never about alienating fans. It’s more about me not being an expert, or even having a well thought-out opinion. There’s so many things to think about at this time that all these issues are just adding onto it, and I’d rather just intake rather than output.

Are there any issues that you’re starting to become more passionate about?

EF: I mean, just everything. There’s so much. This is the thing with the internet, it really amplifies your view of issues because now you can see all of them. One that I think probably affects me the most is the school shootings. I think those are absolutely terrible. Kids should be more focused on surviving their history exam and not a day at school. I was at a mall in my town where a shooting occurred, and it was not nearly the extent of the school shootings, but it was still something that traumatized me.

What do adults not really understand about what modern teens are going through?

EF: I think there’s just a lot of disconnect from adults to teens. And I just think both sides need to be more empathetic towards each other. On the adult side, understand there’s a context for why the teen is on their phone. It’s because they don’t want to live in this weird world, [this] eighth-grade phase that America is going through. Teens aren’t self-obsessed because they want to be or because they’re narcissistic. It’s because that’s how we’re being raised, and that’s how you’re judged, based on your appearance online. So if you see kids taking selfies and being “narcissistic” on the internet, it’s so they fit in and don’t stick out, not because they do stick out and get a hundred million likes on Instagram. I just hope both sides are understanding.

EF: I would maybe just talk about how much school stresses me out. And hopefully, regardless of my performance, my life is going good. And hopefully I’ve chilled out a lot and my anxiety is better, and I’m doing something that makes me happy.