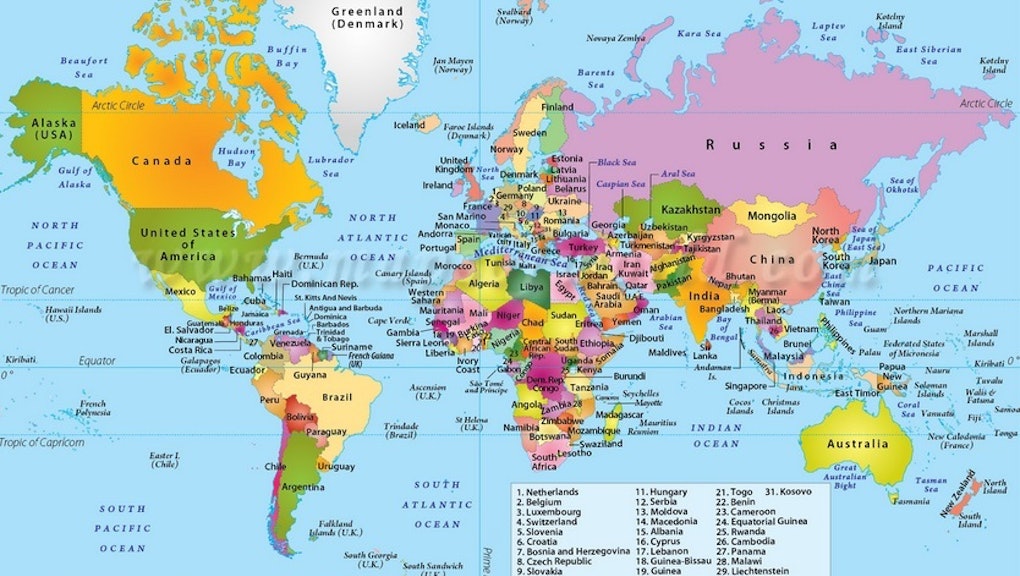 This Amazing Map Shows You Where All the Countries Are

With all the cool viral map articles flying around the internet these days, I figured it's high-time to get in on the action. If you've been online for more than eight seconds recently you've probably seen an amazing map or two. That's because maps are so in right now.

Yes, there's been a map on just about every topic imaginable, including but not limited to racial tolerance, climate change, weird facts, Nobel Prize winners, income inequality, failed states, Europe in the future, slavery, air pollution levels, ancestry, marijuana use, awesome things, and many, many, many more.

But given the abysmal lack of geography skills among Americans — especially millennials — it's time to get back to basics. Behold this amazing map!

Incredible, isn't it? All 196 countries in this one epic map, up to and including South Sudan. Yes, you read that right: South Sudan!

On the map, the words written in bold-type indicate countries, or, the preferred term in international relations — "states." The philosopher Max Weber defined a state as that which "upholds the claim to the monopoly of the legitimate use of physical force in the enforcement of its order." He is not on this map.

Words in italics indicate territories that are not independent states. South Georgia off the coast of Antarctica, for example, is controlled by the U.K. This is because despite their name, the King Penguins who live there cannot actually govern themselves.

Some words in italics indicate bodies of water. For example, "North Atlantic Ocean" shows an ocean, "Arabian Sea" indicates a sea, "Hudson Bay," shows a bay, etc. These are neither countries nor territories because those only exist on land masses. However, the government of Maldives has already practiced landless-governance by holding a cabinet meeting underwater.

Some countries feature numbers over them, but these are not the names of the countries. So there is no country named "7," for example. However, according to some it makes a great name for a person. You can cross-reference the numbers on the map with the legend at the bottom to identify the countries. Numbering is done on maps because it is often difficult to fit say, "Bosnia and Herzegovina" into an already-crowded region, especially if both have recently put on weight.

So there you have it. Everything you wanted to know about the geographic location of every country in one handy, amazing, super-awesomely brilliant map!