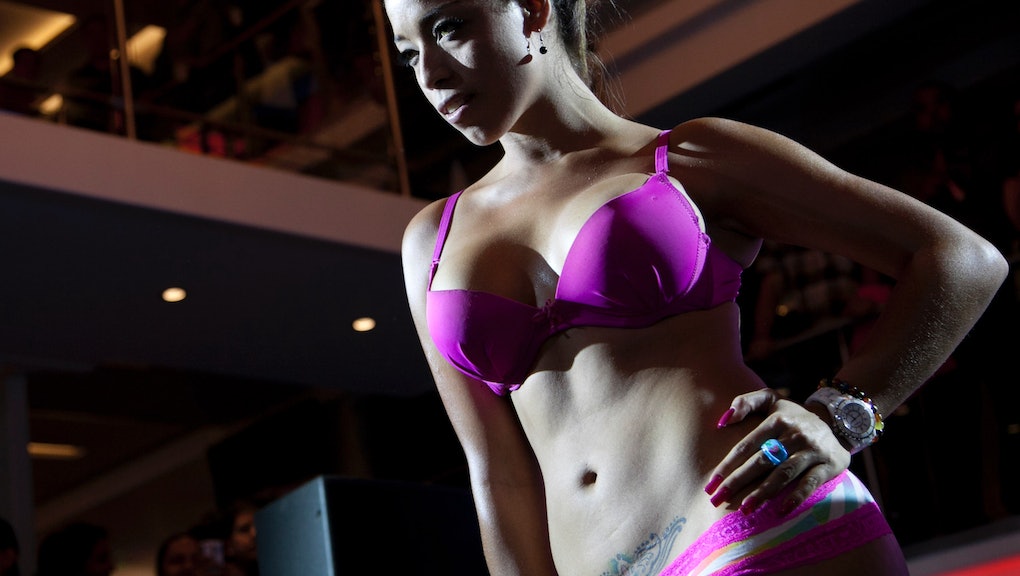 Much of our behavior is learned, and sex is no different. Most young boys, I'd venture a guess, learn about the act of sex primarily through pornography. And therefore, their learning, their early learning, is heavily influenced by adult performers. Most of these performers engage in sex like it's a cross between acrobatics and mixed martial arts. So when kids watch pornography, by and large, they're internalizing this Los Angeles Valley-style of sex to be typical, when the reality is that it isn't (or isn't always for everyone). And the result can be ... well, I'll let this video take it the rest of the way:

A bit of escapism and some cheap gratification shouldn't be put on the same part of the friction-lust-emotion axis as a genuine physical connection with a girl you have feelings for.

The glorious ubiquity of wifi means one is only ever a few clicks away from the nubile, hairless sirens of X Art and their breathlessly enthusiastic humping. Good fun, thanks very much. And those who reckon it's raised their expectations so high they're unsatisfied with real life sex are either deluded or not very good at sex. No, real life is not a place where you regularly wander into a soft focus collage of immaculately-timed orgasms. But neither is it a place where Supermen fly, Rocky wins in the last round every time, and Mila Kunis hooks up with the nice guy after all. A bit of escapism and some cheap gratification shouldn't be put on the same part of the friction-lust-emotion axis as a genuine physical connection with a girl you have feelings for (whether lasting or more....immediate...)

Is it just me, or do we have a far higher tolerance for violence than sex? Why can we show a guy getting shot in the head on network television, but not a pair of tits?

Pornography is definitely a major part of the sexual awakening over the past few decades, and I think most of the moral panic over its spread is just that — a moral panic.

And then there's the ways in which apps like SnapChat and hook-up culture are affecting teens in strange new ways.

Our puritanical heritage haunts us to this day as open discussion about anything deemed 'obscene' is still taboo in the greater public discourse.

The result is an inability to meaningfully discuss porn’s impact on how millennial men view other men, women, and sex in general. Sex ain’t like in the movies (spoilers, I know) and our failure to draw that distinction for our youngest generation is a societal failure. We can’t expect our young men to approach something like sex in a way totally different than what they've been exposed to, especially if we don’t engage them in a conversation about it. Porn isn’t going anywhere and young men (and women) will continue to watch it and be influenced by it. We, as a society, are not doing ourselves any favors by pretending that isn’t happening.

In the long run, the continual repetition of this emotionless experience may translate into a greater barrier for enjoyment with one another. It is something to be aware of.

Pornography is not a modern novelty; it has been around for years. However, the advent of the internet has vastly increased the availability and amount of pornographic content. For millennials, this availability does a great disservice to both perception and expectations. It greatly contours what men and women believe sex to be like.

At a young age, impressionable boys and girls might come to accept the imagery in pornography as ordinary when it in fact is very unordinary. Additionally, these scenes can desensitize us to the very real, and human interaction that occurs during any kind of sexual encounter. In the long run, the continual repetition of this emotionless experience may translate into a greater barrier for enjoyment with one another. It is something to be aware of.

The allure of pornography is that it eliminates the frustration that accompanies sex between human beings: the risk of pregnancy, disease, rejection, and emptiness.

The typical arguments in favor of banning pornography have proved dubious to say the least. Studies find that pornography does not increase violent behaviour and it is no more addictive than Monday Night Football. But there are significant negative consequences from banning pornography. First, as a nation, we need to stop treating socioeconomic issues as moral ones. There’s nothing morally wrong about filming sex, nor, I would argue, is there anything morally wrong with "paying" for it (as Woody Allen quipped, "The most expensive sex is free sex.") The problem is a socioeconomic system that gives women no other choice. By making the problem a "moral" one and crusading against it, the larger issue becomes obscured and we can never get to the root of the problem.

Further, the best way to help women in pornography is to do what we do for men in unpopular work environments like coal mining and garbage collection: unionize and heavily regulate. Women in pornography shouldn’t be considered victims in need of rescue, but rather employees in need of common sense workplace safety regulation. That means condoms in every film, regular STD tests, good wages, rest periods, etc. Banning pornography will only drive the industry underground (and outside of regulation).

Third, banning all pornography would hamper the fight against objectively harmful practices, like child pornography, rape pornography, and animal abuse. Further, it would create added stigma for the women involved and perpetuate a negative paternalistic mindset.

The allure of pornography is that it eliminates the frustration that accompanies sex between human beings: the risk of pregnancy, disease, rejection, and emptiness. It transports the viewer to a fantasy world where any human interaction could lead to coitus. A sultry look at the doctor’s office can lead to a more thorough examination or a short conversation on the metro a one night stand. Porn does to sex what action movies do to violence: strip away the context and consequences. The fantasy of a plumber being invited into the bedroom for a steamy three-way is certainly less dangerous than the far more pervasive fantasy that catching a criminal involves three hunches and no due process.

In real life, most men will realize that there is no director screaming "cut" and a fade to black. They'll just be left looking at a partner whom they just humiliated, which ought not be desirable.