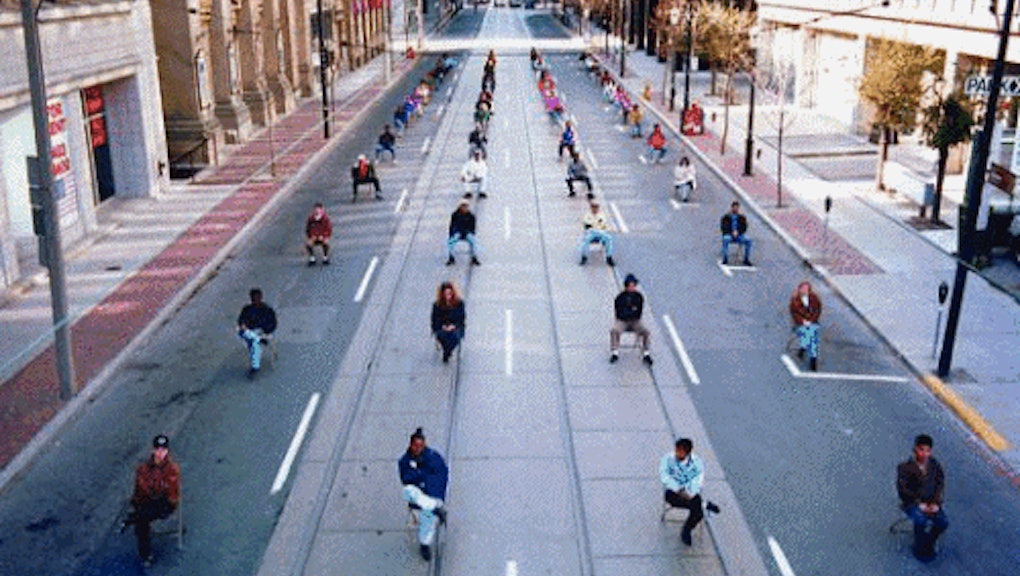 This mesmerizing GIF depicts something that we all know, but don’t often take time to think about: that public transit is far more efficient than cars at moving people around city streets. The animation shows just how much more effective buses and trolleys are at moving people about on roads, as compared to individual cars and trucks.

The background: Putting debates over climate change and urban pollution aside, it’s clear that cities around the world are growing at a breakneck pace, and that each will need to optimize its infrastructure to handle the additional feet pounding its pavement.

Cities only cover 2% of the world’s surface, but they’re housing more and more of the world’s people. According to the World Health Organization, while only 20% of the world’s population lived in cities a century ago, more than 50% people live in cities today — and that ratio is expected to climb to 70% by 2050.

While additional transportation services will undoubtedly have to be built, large cities are also attempting to retrofit and rethink their existing infrastructure to cope with rising demand. Paris and New York City have worked toward automating overburdened subway lines in order to increase capacity. And London implemented its congestion charge system — in which most drivers pay a fee in order to enter central London on weekdays — successfully reducing traffic and emissions and encouraging use of public transit.

The takeaway: While getting up close and personal with hundreds of strangers every morning might be uncomfortable, public transit is the lifeblood that allows dense urban areas to function. As population growth continues, we should embrace the policies and systems that optimize our roads, result in reduced automobile emissions, and offer us ample opportunities to sneak in a nap.