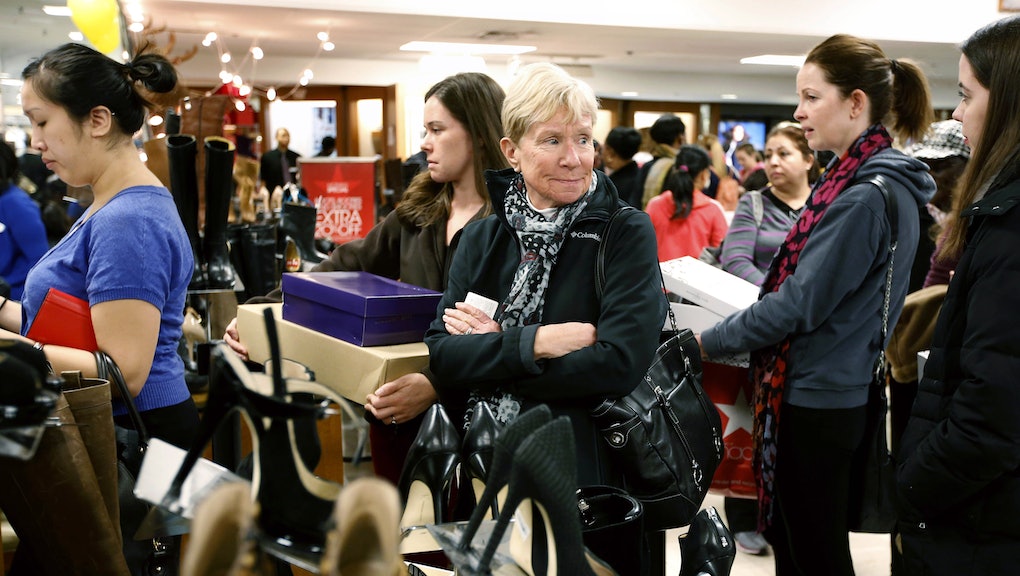 Thanksgiving Day Shopping is Nothing to Be Thankful For

In elementary school, Thanksgiving is explained as a celebratory meal between the starving Pilgrims and the generous Native Americans. In truth, the feast was a celebration of the Pilgrims' first successful harvest, which was cultivated with techniques of the Pawtuxet tribe. The Native Americans were later repaid for their kindness with cruelty and violence. Clearly, the best way to say thank you for the food is to slaughter their families and take their land.

However, a story of violent retribution doesn't jive well with a holiday called Thanksgiving. The truth has been kindly redacted and replaced with construction paper turkeys shaped like the hands of third-graders. As a country, we have collectively engaged in selective memorization, choosing to partake in a day of gratitude for our privileged lives. But let's be fair, even that sham has been replaced with something much more American: food and shopping.

Giant turkeys and massive savings, bottomless mashed potatoes and endless sales, the highly fictionalized family holiday has been swapped for an annual celebration of gluttony. Today, Thanksgiving is constructed primarily of calories and consumption.

But apparently the evolution of Thanksgiving does not sit right with some Americans who are fighting back against this all-American holiday by encouraging Americans to forgo shopping on Thanksgiving.

The movement is a response to the recent trend of large stores opening their doors for evening shopping on Thanksgiving. Beginning with the Walmarts and Kmarts of the world, now even Macy's and other high-end department stores will be open Thursday. Public backlash against the increased store hours has been relatively small, but oddly polarizing.

On one side of the camp, traditionalist and conservatives are concerned with the elimination of another family focused event. T. J. McCormack at FoxNews.com asks, "Is nothing sacred?" in his article that encourages fellow Americans to skip day-of shopping. "Don't go shopping. Stay where you are when the meal is over and do what you're SUPPOSED to do: Linger in the kitchen, pick at the pies, do the dishes, listen to the older ladies complain about their husbands, settle in front of the television with your cousins and reflect about holidays gone by," writes McCormack.

Yet on the other side of the spectrum, worker's rights groups and anti-corporate activists are upset that Thanksgiving Day shopping encourages corporate greed at the expense of minimum wage employees who work through the holiday. They are calling on Americans to stay home on Thanksgiving in order to not perpetuate the oppressive system that takes people from their families.

Given the national campaign to raise the minimum wage, this argument has some weight. Walmart has recently been chastised for asking its own employees to donate food to each other for the holiday. It is quite disturbing that Walmart requires thousands of people to work a national holiday, knowing that their employees can hardly afford a special holiday meal. They take advantage of their employees' desperation in order to get little more than a 15-hour head-start on Black Friday.

Ultimately both ends of the spectrum advocate the same principles. Encourage families to spend the holiday together, take the greed out of Thanksgiving, and make this holiday about love and respect for your fellow men. The message may have gotten a bit scrambled during the 400 years since the first Thanksgiving, but it is coming back around.