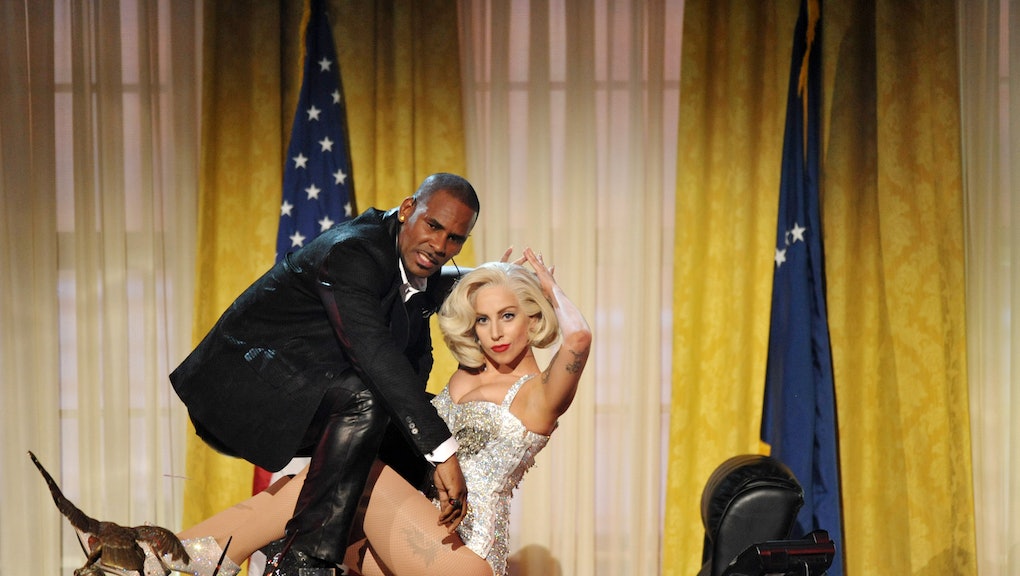 R. Kelly aimed to promote his Black Panties album by answering fan questions via an #AskRKelly hashtag on Twitter. If album publicity and sales were the goal of the promotion, #AskRKelly is an undeniable success. If the goal was to help R. Kelly’s image by letting him engage and relate to his fans, then it was probably one of the dumbest, calculated PR moves Twitter has seen in a while.

Quick aside, the tweets are funny and crass and terrible and mostly about statutory rape. You can consensually click on this link to see them. I won’t surprise you by embedding them in this post and forcing them into your brain. Because chivalry.

Was R. Kelly’s PR team really so dense that they didn’t realize people on Twitter would lambaste Kelly with rape jokes? Whether they were or weren’t isn’t really that important. Kelly’s reputation as a ridiculous sex balladeer is completely intertwined, and perhaps enhanced, by his reputation as a pervert. Sex has always lived simultaneously in our zeitgeist as beautiful and disgusting. The Black Panties album is a reflection of that dichotomy in the fact that it is explicitly filthy and apparently pretty good. So this PR "blunder" was really just a spark that caused everyone to espouse the way we already saw Kelly; a talented provocateur who’s marketing his latest album as a frank reflection of himself. If there’s one thing companies and celebrities have learned about social media, it’s that you can no longer control the conversation, but you sure as hell can decide how to start it.

The more intriguing aspect to #AskRKelly is the way people responded. This is actually the case with most news these days. From Obama’s funeral #selfie to enduring the obviously detrimental consequences of pro football? The masses are now always part of every story. Only a few years ago, I viewed Twitter’s inclusion in news stories as a journalistic cop out, a way for reporters to say, "Look at people caring about this, that makes it newsworthy." It felt like a deep betrayal of journalistic duty, letting society justify the reporting rather than reporting bringing justice to society. Now I feel differently. Yes, the internet has been with millennials long enough that it’s hard to imagine life without it. But the instantly-polled, free-voice internet of social media is still young and evolving. What we’re seeing with the current form of Twitter is the infancy of a truly democratized society.

Perhaps it’s more prepubescence than infancy, because "kids cans be so cruel" feels more appropriate than innocence when rape humor is the prevailing story arc of #AskRKelly. I’m not a fan of R. Kelly, the music or the man. But he's a real human being, and I refuse to believe that most of us would make a rape joke if we ran into Kelly at a Starbucks. Most of us would probably tell him we enjoyed his music. I know I would, even though "Remix to Ignition" is his only song that makes me feel that way. That’s how adults with manners behave in a proper society. And if you’re wondering where the "proper behavior" line on Twitter should be, it’s the same line. Speak as if they’re there.

Whatever R. Kelly's PR team expected when they launched #AskRKelly, it ultimately doesn't matter. They started a conversation and then had to sit back and cross their fingers that it went well for them. They gave us the power to create the story, and then we made it about urination and statutory rape. Calling it a PR blunder is a gross misappropriation of the blame. It's a societal blunder, and with our comments, we started a new conversation. I'm willing to bet that future generations will look at the records of our reaction to simple announcements like #AskRKelly and be appalled. They'll comment on whatever historical wiki they use at that time. Like R. Kelly's PR team, we'll be powerless to alter their judgment, to control that conversation. Who knows what they'll say. I just know that the conversation has started, and all we can do is sit back and hope the masses are kind.