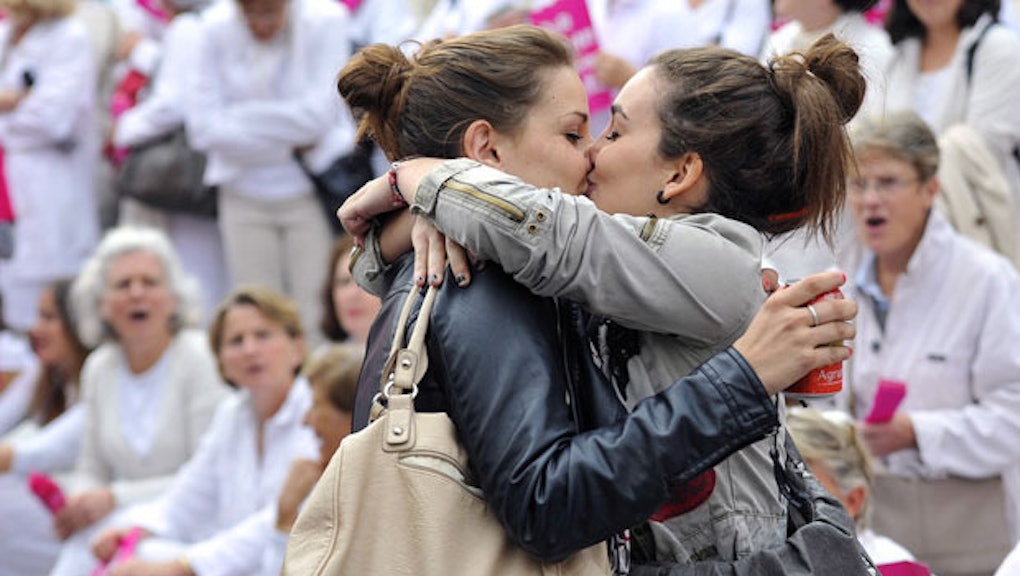 The year 2013 was simply amazing for the LGBT community. Of course, there's work left to be done, but we've come quite a long way toward LGBT equality this year, so let's take a moment to celebrate the greatest moments!

2. Barilla Pasta's CEO Learned Not to Mess With the LGBT Community

Guido Barilla had everything going for him as the CEO of the largest producer of pasta in the world. That is until he forgot that having bigoted views about the gay community will cost you. After he blatantly confessed he would never portray any gay people in his commercials and said "they can go and eat another brand," all hell broke loose. Social media campaigns and petitions were started, forcing this homophobic carb king to back down on his comments. We all celebrated by eating lots of (non-Barilla) pasta.

3. Orange is the New Black Happened

The show premiered in July, and was hailed as first-of-its-kind for portraying many sexualities and gender identities on mainstream television.

4. ... And Laverne Cox Became the First Trans Woman of Color With a Leading Role on Mainstream Scripted Television

5. GLAAD Expanded Its Mission to Include Trans People

Check out the full spread here. Warning: this is definitely NSFW.

7. Chelsea Manning Bravely Opened Up About Her Gender Identity

8. Kristin Beck Became the First Transgender Navy SEAL to Come Out After Her Service

10. This Marriage Proposal Went Viral Across the World

11. ... While This One During a Macklemore Concert Made Us Weep

12. Angel Haze Made Macklemore's Same Love Song Even Better With Her Own Version

13. Then There Was Honey Boo Boo, Who Dropped Some Knowledge About Sexual Fluidity

14. This Teen Came Out To His Mom And Let Us Watch

16. NBA Star Jason Collins Came Out, And Athletes Were Totally Cool With It

In April, NBA basketball player Jason Collins became the first male athlete in a major American sport to come out as gay. On a day when you would think trolls would get all the attention, athletes showed a tremendous amount of support and love for Collins. If you want to reminisce, here's a list.

17. The Pope Said the Five Words We've Long Been Waiting For

In his first interview after inauguration, the pope said some pretty ground-breaking stuff on gay marriage. "It is not necessary to talk about these issues all the time,” the Pope said about gay marriage, contraception, and abortion. "If someone is gay and he searches for the Lord and has good will, who am I to judge?" Francis told journalists.

Although her coming out had mixed reviews, many applauded Foster's courage and grace. Former GLAAD President Herndon Graddick said, "When one of the most critically-praised actresses speaks about her identity and relationships on one of the largest stages in the world, it shows just how much the tide has turned."

In a state run by a Republican governor, no less!

It was one awesome month of August.

28. Republican Rob Portman Came Out in Support Of His Gay Son, and Gay Marriage

Rob Portman, a leader in the Republican Party, became the first sitting Republican senator to support marriage equality. In a March op-ed for the Columbus Dispatch supporting gay marriage and defending his son Will's decision to come out, the senator wrote that he and his wife were “proud of [Will] for his honesty and courage. We were surprised to learn he was gay, but knew he was still the same person he’d always been. The only difference was that now we had a more complete picture of the son we love.”

31. Tim Cook Came Out in Support of ENDA

Apple's CEO also gave this emotional speech about the homophobia he faced in his own life.

32. Then There Was France

Which passed gay marriage in May despite protests.

So they eruped into song.

Only the second Latin American country to legalize gay marriage.

Albeit controversial, Germany's new policy was seen by many as a huge step forward for inter-sex individuals.

38. The University of Warwick Rowing Team Stripped to End Homophobia

This is NSFW. You've been warned. Very warned...

39. Indians Went 'Gay For a Day' to Protest the Renewed Ban On Gay Sex

40. Australia's Prime Minister Took Down Every Argument Against Gay Marriage in One Speech

41. Lady Gaga and Madonna Spoke Out For Gay Rights in Russia

Both artists have taken a bold stand against the government's repressive anti-gay policies. During a concert in April 2012, Madonna said "gay people here and all around the world have the same rights." Not long after, Lady Gaga asked "Where's all my gay kids tonight? Tonight this is my house, Russia. You can be gay in my house." Since merely speaking about homosexuality is a crime in Russia, both artists were placed under investigation by the Russian government this year.

42. ... And Activists Fought Back Against Russia's Anti-Gay Law

And got immediately confiscated by police because, Russia.

44. So Did Gay Internet Putin Art

And led to many awesome images like this one.

45. Athlete Ally Teamed Up With All Out & American Apparel to Protest Russia's Anti-Gay Law in Style

The fight will continue! Here's to another year of LGBT victories in 2014.

What was your favorite moment from 2013? What did I miss? Let me know on Facebook and Twitter.