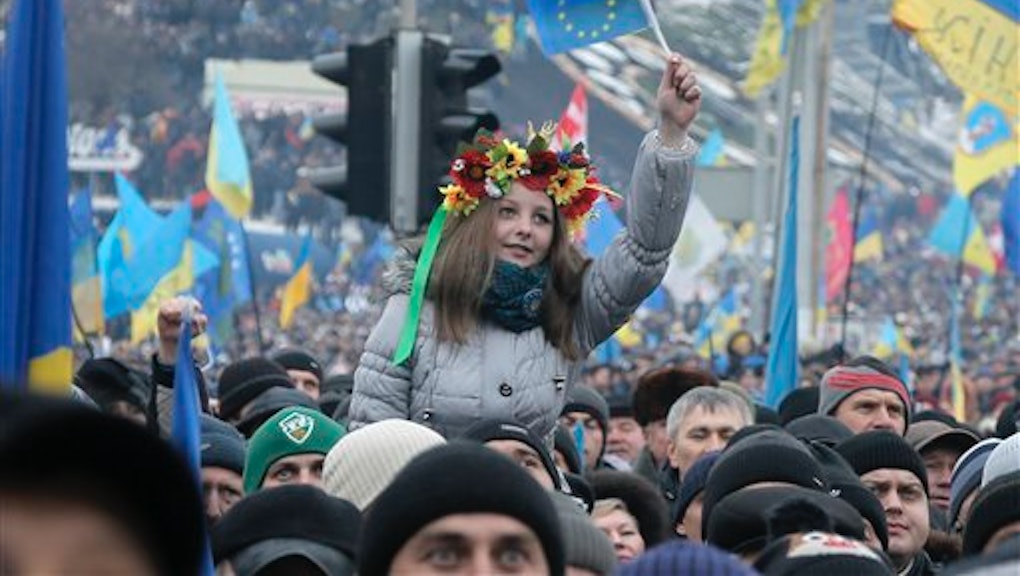 What the Media Doesn't Get About the Protests in Ukraine

Ukraine's capital, Kiev, has seen fresh protests after a Christmas day attack on a prominent journalist.

So what are the protests really about?

On December 18, Ukrainian President Viktor Yanukovych inked a deal with Russia whereby Moscow would buy $15 billion worth of Ukraine's eurobond debt and slash its gas bill by a third, saving the country from almost certain bankruptcy. Protestors from the political opposition continue to linger after massive demonstrations rocked Ukraine over the past few weeks in support of an opposing trade deal with the EU. Early instances of those protests were brutally suppressed.

The story told by Western media has been that the peace-loving masses spontaneously erupted in direct action to support the EU deal, and President Yanukovych, as deemed by the New York Times, is betraying his citizens by "bow[ing] to Russia's threats" and "payouts."

Leaving aside which deal was more advantageous to Ukraine's population, there's reason to be skeptical of the current protestors' demands, and how genuinely they represent the will of a deeply divided country. Like all events in which geopolitics is afoot, an illustrative historical context eludes the eyes of those watching CNN.

Since the USSR crumbled in 1991, the United States and its NATO partners have attempted to chip away countries of the former Soviet bloc from their traditional links to Russia, including Ukraine. Their favored method? Form protests, splash a little color on them, then call it a revolution.

What do all of these "revolutions" of the past two decades have in common? They were all organized, financed, and/or significantly aided by American "pro-democracy" outfits like USAID, the National Endowment for Democracy (NED), Freedom House, George Soros' Open Society Institute, and a whole constellation of public-private affiliates.

For those who don't recall these "color revolutions," here's a primer: They began with Serbia's Bulldozer Revolution in 2000; then Georgia's Rose Revolution of 2003, which rose the psychotic Mikhail Saakashvili to power (who, in turn, started a war with Russia that destroyed his country and almost brought the U.S. into World War III); Kyrgyzstan's 2005 Tulip Revolution, which later led to massive violence and near-ethnic cleansing; and Ukraine's 2004 Orange Revolution, which deserves closer examination in light of the recent deluge of support for the political opposition from the U.S. Senate and the Worst Batman.

Orange is the New Black Ops

Back in November 2004, western-backed candidate Viktor Yushchenko lost, but the results were disputed. Exit polls, those ever-reliable indicators, put Yushchenko ahead by 11%, although the final tally had his rival, Kremlin favorite Viktor Yanukovych, up by 3%.

While not the only ones, the largest civil regional election monitoring effort in the 2004 Ukrainian election was organized by Freedom House and the Democratic Party's National Democracy Institute (NDI), one of the four main organizations comprising the NED.

Although the election results wouldn't be announced until November 23, the Yushchenko campaign publicly called for protests two days earlier, on the day of the election, after reports of fraud circulated in the form of leaflets printed and distributed by the Democratic Initiatives Foundation(DIF), based ostensibly on the results of their exit poll. According to their website, DIF is "an analytical and enlightening organization which aims at building Ukrainian state, democracy, and market economy [sic] and enhancing full integration of Ukraine into European and Euro-Atlantic structures" [emphasis added]. The group has been known to receive USAID funding for certain projects.

By November 22, a day before the results were officially announced, half a million people had already mobilized in Kiev's Independence Square to denounce the election. From then until their end in January, the Kiev protests were coordinated by the Ukrainian youth group Pora! ("It's Time!"). Established in 2004 in opposition to the Kuchma regime, Pora! funded the training of its activists through "grants provided by the German Marshall Fund of the United States, Freedom House and the Canadian International Development Agency."

Those grants sent Pora! organizers to be trained by Otpor, the Serbian youth protest movement wielded by the West so effectively against Slobodan Milosevic in the Bulldozer Revolution." Here's how an article in the Washington Post described those efforts in Serbia's 2000 election:

"U.S.-funded consultants played a crucial role behind the scenes in virtually every facet of the anti-Milosevic drive, running tracking polls, training thousands of opposition activists and helping to organize a vitally important parallel vote count. U.S. taxpayers paid for 5,000 cans of spray paint used by student activists to scrawl anti-Milosevic graffiti on walls across Serbia, and 2.5 million stickers with the slogan 'He's Finished,' which became the revolution's catchphrase."

Oddly enough, the content of that Washington Post article — published on Dec. 11, 2000 and titled "US Advice Guided Milosevic Opposition" — has been blocked from search engine indices so that it can't be accessed through Google and others.

In total, the U.S. spent roughly $65 million on influencing the 2004 Ukrainian elections. It remains unclear how much of today's current protests trace back to the infrastructure and strategy pioneered in 2004.

In the Middle Of Russia and EU

In 2010, after the Orange Revolution devoured itself and Yanukovych was brought to power, the new clarion call for Ukraine's western-centric population became EU membership.

When Yanukovych refused to sign the EU associate deal this November, he was denounced for "us[ing] Ukraine as a pawn" by opposition leader and new western darling Vitali Klitschko, who accused the president of handing over Ukraine's industrial base to Russia in exchange for the perks. In a typical bout of economic blindness best reserved for television's talking heads, Klitschko seems unaware that the regulations adjoining the EU association allow for similar plundering, if not worse, by western capital. The EU deal included a bailout package from the IMF, but stringent "economic reforms" of the familiar variety came in tow: austerity for the population, a decrease in social spending and wages, plus a sharp rise in utility rates.

In fact, Russia has been routinely chided by western cold warriors for its use of natural gas prices as leverage over Ukraine. But when Putin first jacked up those prices, he simply cut off the energy subsidy that Moscow was providing Kiev since its time in the Soviet Union. He was merely requiring Kiev to pay market rates for energy — a bread-and-butter neoliberal reform that would have come with the EU accord.

When it comes to analyzing why states act as they do, thankfully there's no rosy-eyed naivete in the western media about Russia's interests in Ukraine. It's about time they offered similar skepticism for the aims of Brussels and Washington, including a history of western-funded and directed protest movements.