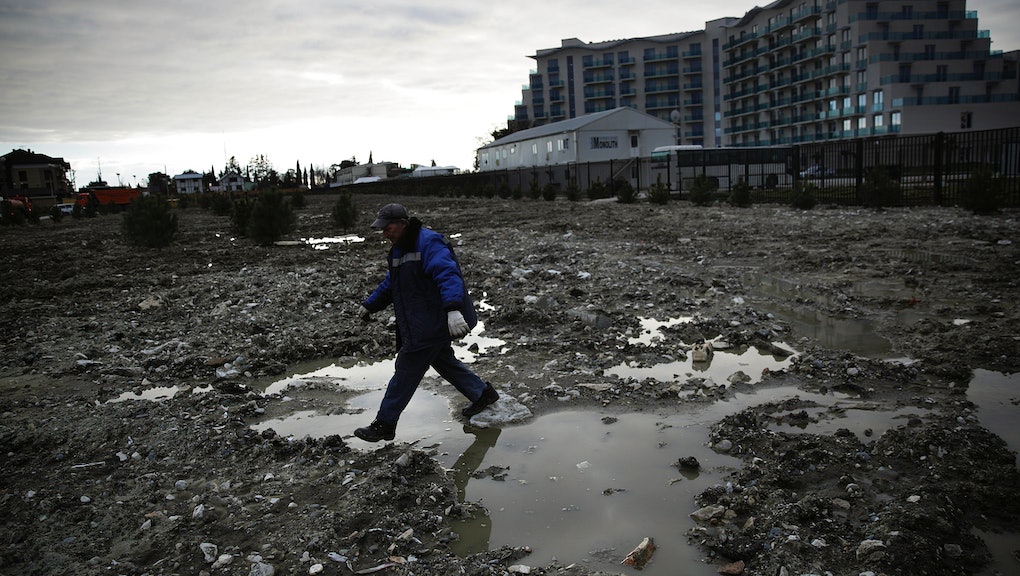 If You Think Sochi Made Promises It Won't Keep, Look at What These Places Said

In a pre-Game session with the International Olympic Committee, President Vladimir Putin asked the world to take an unbiased look at Sochi's makeover, to view its redevelopments as part of a “new Russia” with "personality and possibilities." Nevermind that preparations for new Russia included forced housing evictions or disrupted water supply to ensure unfettered installment of a $9 billion roadway to and from Games venues and a $780 million dollar stadium.  What do Sochi residents need with reliable, running water when the roof of their new stadium can change colors? A stadium built, by the way, through exploitative immigrant labor. So much for hope of bolstering long-term job creation. Also, that roadway? 18-miles long. Either $51 billion just doesn't buy what it used to, or money pumped into Olympic Games infrastructure projects is a hideous waste of resources with long-term consequences.

The reality is that Russia isn't the first place to claim grandeur and eternal sunshine because one of its cities hosted the Olympics. Putin’s lobby to use the Sochi Games as a way to show off Russia on a global stage is nothing that hasn’t been promised before. It's the same old rhetoric it's always been — lasting legacy, economy boom — a 17-day fits-all tournament to finally give that GDP the skyrocketing boost it needs. The Olympics are just expensive catalysts to make certain types of processes happen quickly, and no amount of platitudes on their legacies can compensate for a host country's economic demise or human rights violations.

Here are four other absurd promises, past and present, where Olympics were staged to fix everything and either did nothing, made things worse or wreaked outright havoc.

London gets a few points for delivering the 2012 Olympic Games under budget at $10.4 billion (event though the final projection increased three times after the original estimate), but where they fell short is on their vague pledge to "inspire a generation" to hit the gym. Real talk: If you hated running in the rain before the Olympics, watching Jessica Ennis graze a high-jump bar from your sofa probably won't do much for motivation.

At the heart of the capital city's bid was the promise to use the 2012 events as a peg for investment in accessible sport and exercise, but in reality, the long-term net effect was minimal — a few positive developments here and there, like widespread cycling lanes, but the creation of a healthier society from Olympic legacy rhetoric? No. A December 2013 national health survey revealed the nation was nowhere near reaching optimal health goals.

Looks like all that exercise talk was but a failed January gym resolution writ large.

Poor Greece. By the time training season kicked off for London 2012, the country didn't have enough money to foot the air conditioning bill so athletes could use their Athens legacy stadiums. What happened after they spent $9 billion dollars they didn't have to host the 2004 Olympics in honor of their birthright? Their economy went down in flames.

Things looked diastrous before the torch was lit — the snail pace of stadium renovation, political contention over hosting, forced eviction of the Roma minority from Athens — and the country eventually nosedived into the largest sovereign default in history.  Government austerity measures to keep the economy on life-support have meant years of fiery protests, and a generation robbed of employment.

3. Brazil's promise to improve the needs of the poor.

Hosting an event of Olympic proportion means the chance to improve social issues, right? Not exactly.

When Rio de Janeiro won the bid to host the 2016 Olympcis, phrases like "the games of social inclusion" and "sustainable development" became more ubiquitous around town than acai on Ipanema Beach.

Consider 2013's violent protests against the Games the front page of an archive rife with discontent. Forced evictions, open-sewers, federal budget cuts on education, fare hikes in public transportation and indecent working conditions for stadium builders are but a few of Brazil's laundry list of hosting issues.

Not to mention, the 2016 Games will set Brazil back at least $14 billion dollars.

Bit excessive for two and a half weeks of sport, no?

Nevermind that it will take at least 30 years to pay off its 17-day sporting event, the 2008 Beijing Games legacy included a ridiculous pledge to rid air pollution for good. Wang Wei, head of the bid committee, claimed having the Games in China would boost the economy and "enhance all social conditions, including education, health and human rights." Spoiler alert: that didn't happen.

Behind this urban renewal campaign in the Games lead-up lurked the same deep-seated corruption and authoritarian control as ever — human rights activists were thrown in jail, Tibetans were slaughtered during protest, homeless and migrant workers were tossed out of the city.

Worth mentioning that Beijing's air pollution still poses something of a problem for its population.