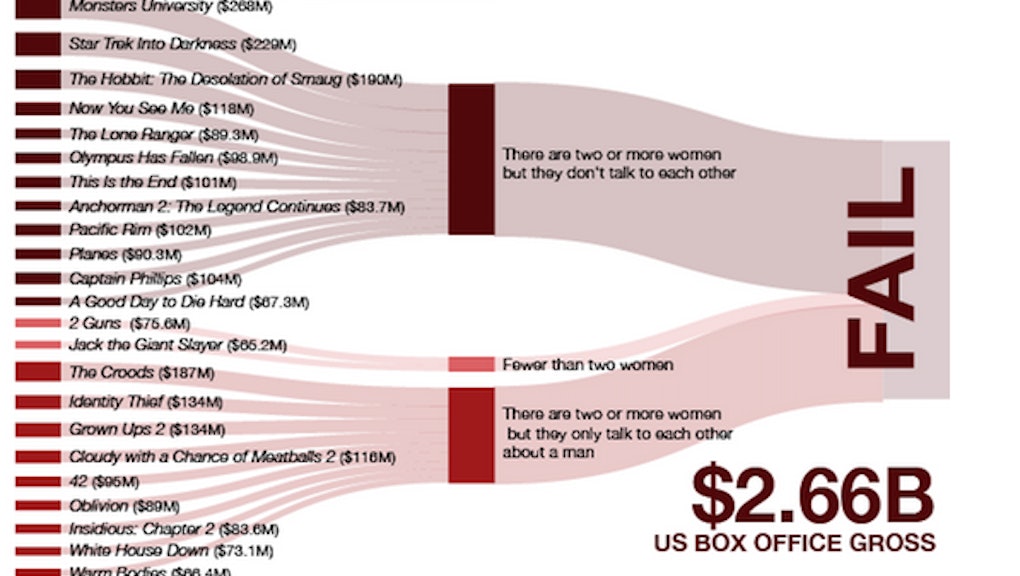 Why Sexism Doesn't Sell in Hollywood, in One Graph

After a particularly disappointing holiday season leaving female movie-goers with little to enjoy but the male-centric sexist tropes of Wolf of Wall Street, Her and Anchroman II, it's undeniable that Hollywood has a huge woman problem.

But here's the twist. According to a new report by Vocativ, including complex lady characters in a storyline is actually good for business. It's not only a good way to keep half of the population interested in your film, it's also a great way to make sure your movie makes a lot of moola.

Versha Sharma and Hanna Sender examined the net profits of 50 blockbuster films. The ones that fared better at the box office scored higher on the Bechdel Test, a rating system that measures gender bias in films. Put differently, most of the movies that feature at least two named female characters who have a scene where they talk about something other than a male character brought in significantly more money.

As it turns out, the only thing that sexism sells is empty seats.

Still, despite the striking conclusion, only 36% of the movies analyzed actually passed the Bechdel test, while a small handful were given a "dubious" rating (in light green in the graph above) because some of the female dialogues were about male characters (although not entirely). So although this report is encouraging, it shows that there's still a lot of work to be done. The authors noted that all of the movies (but one) had a male director. It's no surprise when we consider the fact that women still make up barely 9% of directors.

As more people refuse to pay 13 dollars to see a female character introduced with lady leg zoom-out angle, Hollywood will have no choice but to listen. Let's hope it comes to this realization soon and let's go of the disproved mantra that sexism sells because from the looks of it, female empowerment seems like a pretty good (and profitable) alternative.