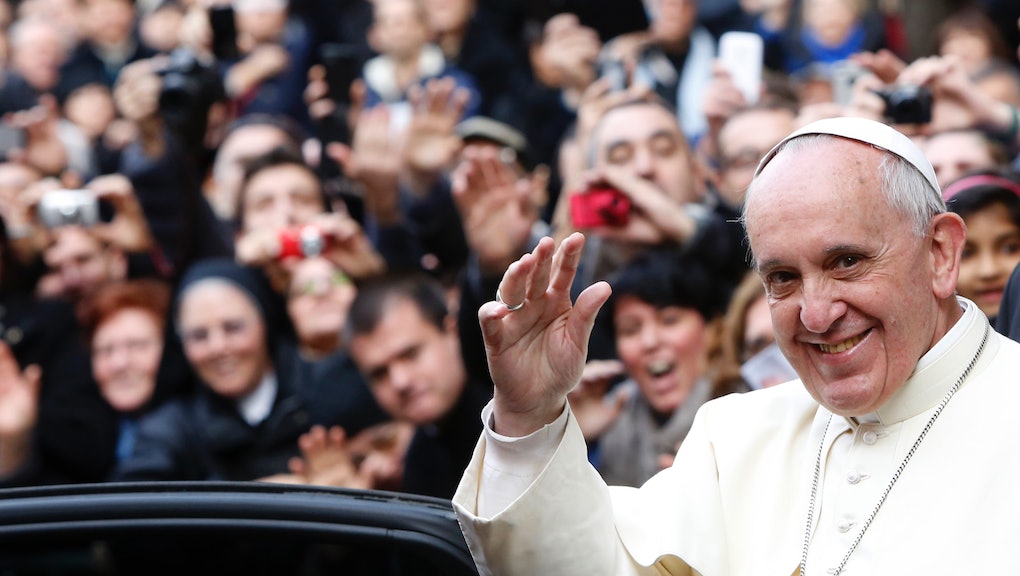 This Is What the Pope Just Said About Gay Parents

The News: Well, he's done it again. In a speech to the Catholic Union of Superiors General, Pope Francis discussed the Church's position on the children of gay or divorced parents, warning against "administer[ing] a vaccine against faith to them."

"On an educational level, gay unions raise challenges for us today which for us are sometimes difficult to understand," Francis said in the speech which took place in November, but of which excerpts were just made available to Italian media on Saturday.

The pope said the Church needs to be able to keep up with the make-ups of modern families in order to continue to "proclaim Christ to a generation that is changing."

Things sure are different than they used to be.

Surprised? Not really. Since becoming the 266th pope, Francis has made a splash with various "liberal announcements" (economically, socially on various issues), mostly signalling a more open and understanding Catholic Church (though you might not want to go as far as calling it liberal). So based on his track record so far, Francis's November speech shouldn't come as too much of a surprise to anyone who's been following him lately.

However, that doesn't make it any less powerful. In fact, perhaps this speech is the perfect encapsulation of everything Francis has been saying over the past few months. That is, in today's modern world, many of the old teachings of the Church are simply incompatible with current-day issues. It's not that the Church's ideas have necessarily been wrong, rather they haven't been understanding the full scope of the questions. But there's no reason why that can't change.

Compared to the 2,000 year existence of the Catholic Church, issues such as gay marriage, abortion, and divorced parents have only existed for a relatively short time, and it seems Francis wants the Church to understand these modern complexities, how they affect their church members, and to at least consider altering some of their stances to reflect this. If not, more and more generations of young people will grow up with a church that has "administered a vaccine against faith to them."