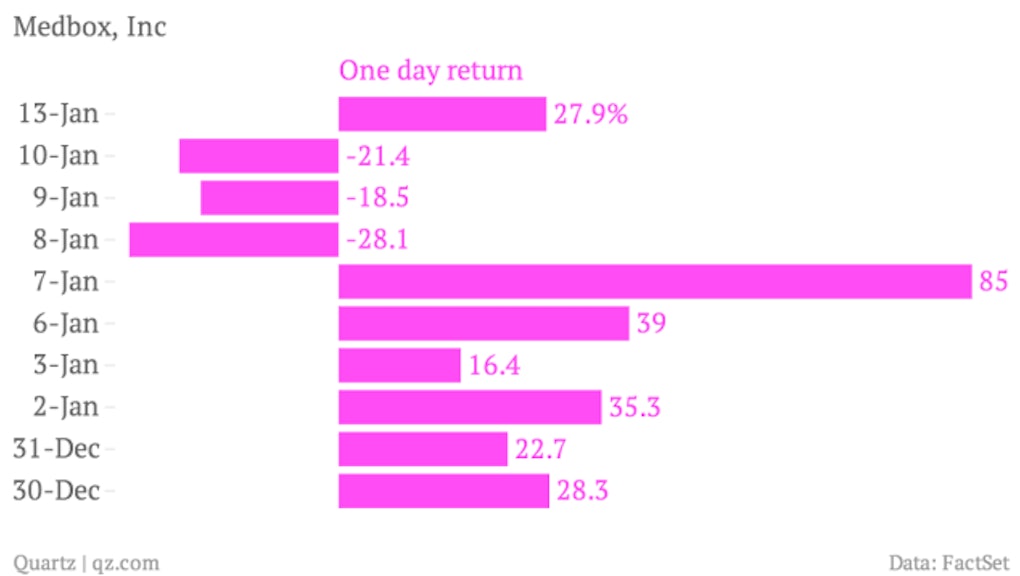 Marijuana Stocks Are Booming, But There's a Twist Every Investor Should Know About

The news: As Colorado moves forward with its legalization experiment, pot stocks are skyrocketing ... as are stocks linked in any way to the marijuana industry.

Medbox, a firm which sells medical marijuana vending machines that use fingerprint ID to keep pot out of the hands of would-be thieves, briefly hit $1 billion last week.

Quartz broke down some of the booming stocks:

The reality: Most of these companies are listed on less-than-trustworthy over-the-counter markets, where there's no real standards needed to get listed. These stocks aren't Nasdaq or NYSE, and there are real reasons to think twice before buying them.

According to Quartz, a few marijuana companies were using shady tactics, including some that seemed similar to classic "pump and dump" schemes. One company promoted itself via sponsored links and spam email, issuing 30 smiling press releases while hemhorraging money. Another had changed its name four times in the past 10 years, while a third had just recently shifted out of the coffee business to cash in quickly on the marijuana boom.

Though not every marijuana firm is so shady, here's what the market actually looks like — volatile.

This is how much Medbox fluctuated:

As Bloomberg noted, Medbox's $1 billion peak put it at a quarter of the value of the largest regular vending machine company, Crane Co. ($3.9 billion). Crane Co. makes $2.58 billion in revenue yearly, employs 11,000 people, and posts $215 million in profit each year. Is Medbox really worth anywhere near that much?

The bottom line: Given the risks, investing in marijuana might not be all that smart right now. Reefer market madness is great for press releases and PR, but it might not be so good for your portfolio. Wait for the industry to grow into something more mature and stable before breaking in.