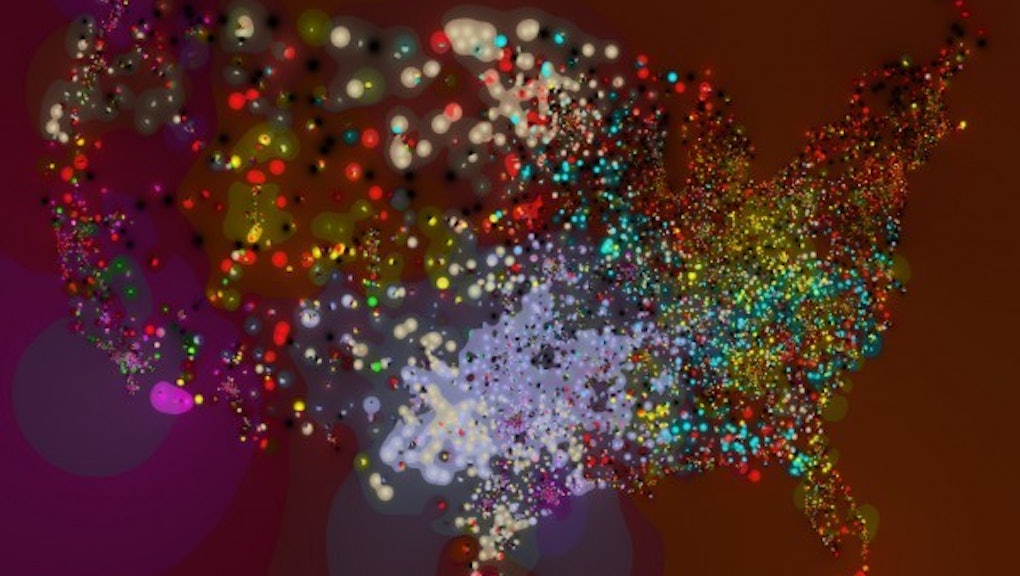 19 Maps That Perfectly Explain the United States of America

Ah, America — Home of the Brave and Land of the Free, as the saying goes. But have you ever seen it like this?

1. The most healthy states in America:

This one isn't very flattering to the South or the Midwest, which ranks pretty poorly. According to The Atlantic Cities' Richard Florida, the data matches up with socioeconomic conditions including its fundamental economic and class divides. For example, increased exercise levels match up with both income (.65 correlation) and wages (.64). There are also substantial correlations between smoking (-.63) and obesity (-.80) with less exercise.

2. The fast food invasion of America:

Welcome to beefspace. These colors represent the three most influential chains at each point on the map, weighted by cumulative force at a 4:2:1 ratio.

No Taco Bell, though. I am very disappointed.

3. The best movies set in every single state:

One enterprising Redditor categorized the top-rated IMDB films set in each state, with some surprising results. (Did you know Fight Club is set in Delaware? I didn't.) What's the best movie in your state?

At first glance, you might think think this map looks pretty bad for Democrats — who will be losing seats in the Northeast and Great Lakes region as Republicans gain seats in the South and Southwest. But a burgeoning Hispanic population which has grown 43% over the past decade is likely to continue overpacing the growth of the Caucasian population, so perhaps many of those seats will be going to Democrats.

5. How European countries would compare to U.S. states in size:

Europe doesn't just have smaller waistlines than Americans — it's smaller in landmass, too.

According to the map's creator, this map is accurate to within 2% of the overall area. It's pretty amazing, and shows just how big the United States is; in fact, Europe's total land mass (3.931 million sq. miles) is only slightly larger than the United States' (3.794 million sq. miles). If you didn't count Russia, which takes up approximately 40% of Europe, America would be far larger.

Here's the creator's breakdown of European countries, compared to how many U.S. states they could contain. Did you know Portugal is the size of Maine?

6. How European countries would compare to U.S. states in population:

... But despite being a lot smaller, Europeans are packed in there like sardines. Europe's total population is estimated around 739.2 million, while the U.S. is less than half that, at 313.9 million.

This map shows how Germany, France, Italy, Spain and the UK combined could fill up the entire country. And since Europeans are used to living more densely, there'd probably be room for, I don't know, the Swiss or something.

7. Number of U.S. presidents born in each state:

The Northeast dominates here, but probably because it's taken a very long time to fill out the entire country from the east on west. Virginia dominates with eight presidents, but what's probably most surprising is Ohio (really?) coming in at number two. That might have been back when Ohio was a more prominent state, since Ohio's last man to enter the White House was Warren G. Harding, 1915-1923.

But the last few decades have seen the locus of presidential origins shift from the Northeast to other parts of the country:

8. Walmarts across the nation:

Rural and suburban areas actually have a disproportionate amount of Walmarts. New York City, the Bay Area, and much of the area around Washington, D.C. are all devoid of the Walton family's ominous reach.

9. How housing prices have changed in every state since 1998:

This graph shows the relative cost of housing by county, with dark red showing prices close to the maximum median for that year and dark blue representing the counties with the lowest costs. (White is no data.)

As you can see, California, southern Florida, and the Northeast (especially areas close to New York City) have seen the highest increases in housing costs, as well as much of the state of Arizona and areas surrounding Aspen, Colorado.

Wow. Nevada is a bad place to be looking for work, as are Michigan and Illinois. Notice extremely low unemployment rates in North and South Dakota, Nebraska, Wyoming, and Utah — states enjoying an energy boom based on shale oil extraction techniques and natural gas.

This one is actually kind of depressing, tracking the percentage of respondents 25 or older who have a bachelor's degree.

But while it might look like America is incredibly uneducated, in reality, 30.9% of the U.S. has a bachelor's degree or higher, while 87.6% have either a high school diploma or bachelor's degree. People with college diplomas cluster in cities, while the rest of the country tends to have high school educations. This might surprise millennials — 59% of 18-29-year-olds have completed at least some college.

Cities actually have lesser commute times than rural areas, thanks to the benefits of geographical proximity and widespread public transportation. Another Redditor provided a list, originally compiled by Forbes, of the cities with the highest and lowest commute times:

13. Every native language in North America:

Unfortunately, most of these are dead or dying. Of the 300 native languages which existed in America before the arrival of European colonists, just 175 remain, and a shocking 125 of those are spoken only by those middle aged or older.

14. Map of federally-owned land in the United States:

Just look at how much land the government owns, especially out West and in Alaska. The Feds own a whopping 84.5% of Nevada, 69.1% of Alaska, and 57.4% of Utah. Nearly 30% of the U.S.'s total territory, or approximately 2.63 million square kilometers, is owned by the federal government.

Here are the states with the highest percentage of federally-owned land:

Essentially, much of the West is still unsettled, reserved for federal use like parks, reserves, Native American reservations, military training grounds, or leased to the private sector for forestry, mining, and agriculture.

I don't care what the rest of the country says. It's soda.

Of course, this is all based on a black market. Estimates of the total revenue if marijuana was legalized range from $10-120 billion, potentially making marijuana the biggest cash crop in the entire country. By comparison, brewed beverages (beer) are worth $100 billion, while all the corn in the country is worth $23.3 billion. Yikes!

17. What the U.S. would look like if every secessionist/partitionist movement had succeeded:

18. Change in states' economies since before the recession, by GDP:

Big winners here are Texas, which is doing particularly well partially thanks to a large pool of cheap labor including many immigrants (legal and illegal), and Wyoming and North Dakota, which are benefiting immensely from the aforementioned energy boom.

19,911,467 Americans (People either uncertain of ancestry or making a political statement)