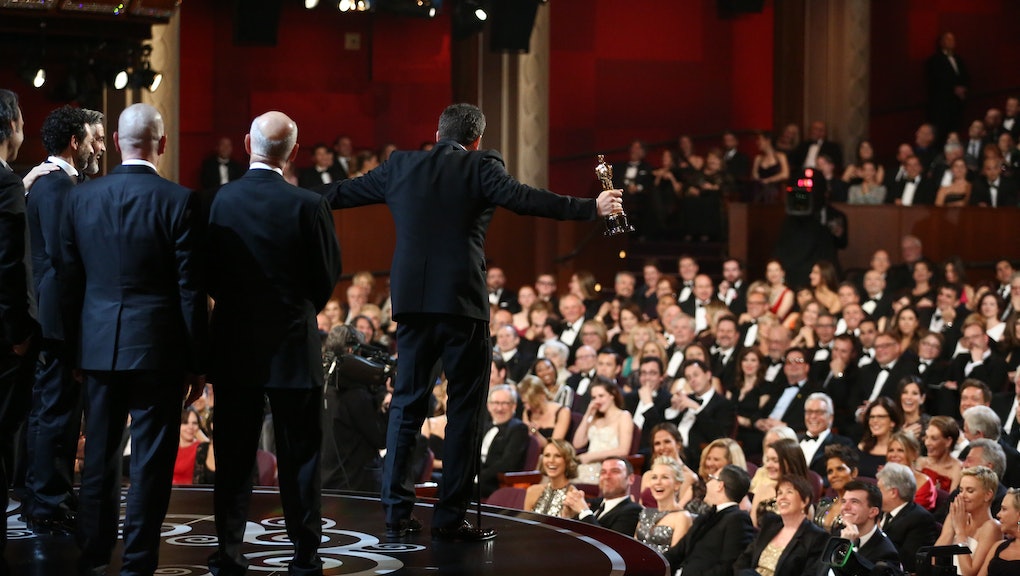 Every year when the nominations for the Academy Awards are announced people complain. Whether it's because of a film like Inside Llewyn Davis being snubbed for Best Picture, or Oprah Winfrey getting "robbed" of an Oscar nomination for her performance in The Butler, fans and movie-makers aren't shy about airing their gripes with the Academy. After all, if a film is nominated for an Oscar, it does exceedingly better in box office sales (American Hustle, for example is up 28% in ticket sales since receiving multiple nominations this year). But no matter how many people uphold Academy Award nominations as the holy grail of movie-making, the awards are decreed by a group of people who don't represent all film-goers, especially young and female ones.

An LA Times study found that Academy Award voters are 94% Caucasian, 77% male and have a median age of 62. Men make up 90% of five branches from cinematography to writing, and of the 43 board governors, only six are women. It makes me wonder, if more young people were members of the Academy, might the Oscar nominations change?

For starters, we young people would likely make different, less predictable choices regarding nominations. Maybe this year newcomers Ryan Coogler and Michael B. Jordan would be recognized for their indie film Fruitvale Station. Perhaps we would honor the quiet flick Inside Llewyn Davis which barely garnered Oscar nominations amidst Oscar Isaac's subtle but hilarious performance. The original folk-inspired soundtrack didn't even get a Best Song nomination.

The wildly avant-garde Harmony Korine-directed Spring Breakers would definitely be nominated, seeing as how it is a satirical take on the public's impression of millennials and their hedonistic lifestyles driven by sex, violence and fame. You certainly can't argue that this film didn't get a nod for crazy parties and female nudity; Wolf of Wall Street was arguably equally graphic. Though maybe Wolf is considered more acceptable because a grown man is at the helm of the film's madness rather than a quartet of teenage girls.

If I had it my way, I'd bend the rigid Academy Award rules for a few films that were especially popular with people my age. Blue Is The Warmest Color was an emotionally-charged drama of young, female, lesbian teen love. Its absence at this year's Academy Awards feels odd as it was such a favorite among many American critics. Apparently, it couldn't be included due to time constraints. Blackfish, the anti-captivity documentary about Seaworld, was particularly popular with viewers aged 18-30, and sparked activism on Twitter. But because it premiered on CNN, it can't be nominated for an Oscar in the documentary category.

One of the reasons it's hard for someone like me or my peers to understand the Oscars is that certain hierarchies don't make sense to us. Why is a film like Blackfish suddenly less worthy because it premiered on television before having a theatrical run? For a film to earn an Oscar nomination, it must be reviewed by the LA Times or the New York Times, which puts a lot of importance on these two publications. Does being reviewed by these papers somehow make these films better? Or does their reviewing validate their importance? The message the Academy sends is that for a film to be "good" and "worthy," it must be approved by traditional standards

We can't change the Academy overnight, but we can certainly stop venerating it when it doesn't represent us. It is an institution like other American institutions: old, white, male and rooted in tradition. With indie cinema on the rise and VOD services bringing more and more movies to the people, young American audiences don't need to turn to old-school institutions like the Oscars to make decisions about what movies and performances are deemed the best.

It is highly troublesome that the Oscars represent a night for celebrating the best of cinema, when the award show is a pretty basic affair that upholds movies about greedy Wall Street officials and simply written, CGI-driven movies about outer space. It's not to say these movies are bad; it's just become pretty obvious what the older, white-male dominated Academy likes to nominate. And it doesn't seem too youth friendly.