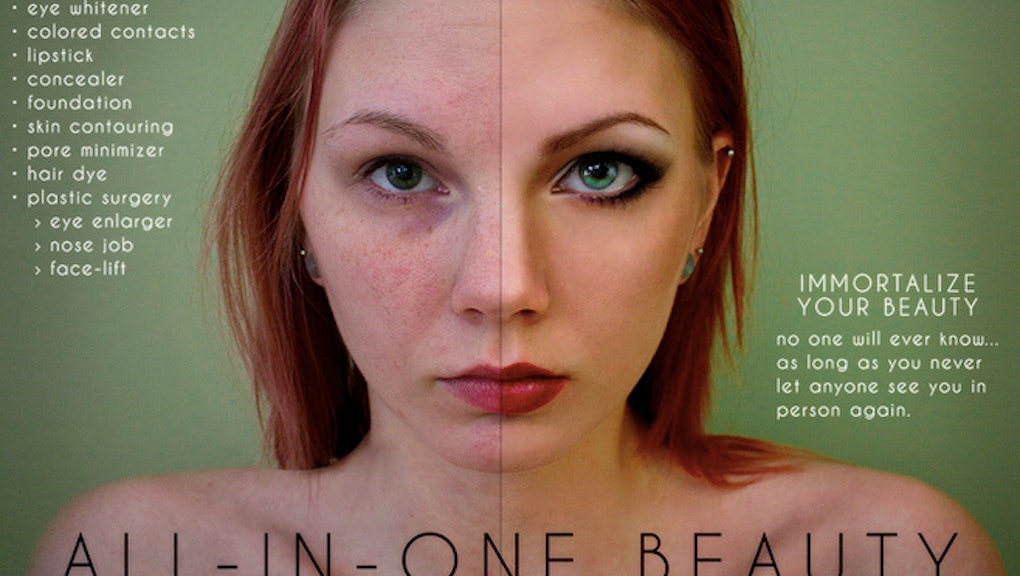 Anna Hill is Tired Of Photoshopped Ads. She's Come Up With Genius Satire to Prove Her Point.

The latest batch of magazine editorial scandals from Vogue and Elle highlights the continuing pressure that women face everyday to look picture-perfect. While some corporate brands are taking a stand against airbrushing female models into oblivion, there is still much to be done to stop the damaging practice of propagating unrealistic images of women.

One young woman is doing just that with her series of satirical photos called "Beauty Is Only Pixel Deep." Artist Anna Hill took photos of herself and digitally manipulated them to look like cosmetic ads that extol the virtues of Photoshop:

Hill, 24, is a photography student who knows her way around photo manipulation. She embarked on this project to call out the disturbing media trend of Photoshopping women, and encountered some unforeseen consequences along the way.

"One thing I noticed when I was doing these was that when I suddenly went back to the unedited [photo of myself], it looked so wrong and kinda gross," she said. "It made me extra aware of how skewed my perception was after looking at the edited ones for a while." Even though she was doing the photo manipulation herself, Hill couldn't help but be affected by the difference between her natural look and her digitally-altered self.

Hill created the images for a class project, and was surprised to see how viral they went. But she understood why people connected so intensely with her work: "I think people like to be reminded that the beautiful models we're surrounded by daily aren't actually as real as they seem — without extensive makeup and editing, many don't look that much better than the rest of us," she told Yahoo.

Hungarian artist Boggie recently unveiled a project along the same vein, filming a representation of a 3-minute Photoshop session taking place on her face.

A similar project by filmmaker Jesse Rosten called "Fotoshop by Adobé" also went viral in 2012. The video is a fake commercial that describes Photoshop as a fix-all beauty product: "Finally look the way you've always dreamed. The difference is clear. Just one application of Fotoshop can give you results so dramatic, they're almost unreal...istic."

Rosten's description of the video is simple, but powerful: "This commercial isn't real, and neither are society's standards of beauty."