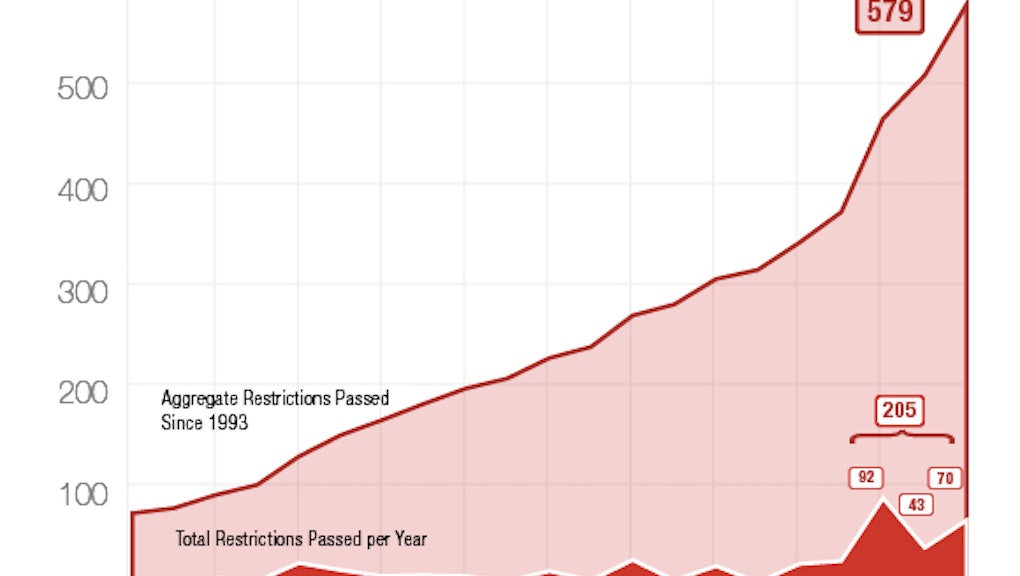 The news: On Tuesday, four hours before President Barack Obama’s State of the Union address and the myriad rebuttals to it, the House took time out of its busy schedule to quietly pass a doomed piece of legislation: H.R. 7, a bill that would prohibit the federal funding of abortions via Medicaid or government employees' health insurance plans.

The bill, which was pushed forward by the all-male Republicans on the House’s Judiciary Committee, is almost certain to die in the Democrat-controlled Senate. Even if it were to pass, little would change: the federal government has been forbidden from funding abortion since 1976, when the Hyde Amendment first went into effect.

In short, House Republicans just spent the entire month of January advancing a piece of legislation that won’t become a law, and wouldn’t change anything if it did.

The background: The House’s vote comes as part of a larger, nationwide campaign to deal legal and accessible abortion a death by a thousand cuts. The below GIF from Planned Parenthood does a great job of illustrating the jump in state and federal restrictions on abortion passed since 2011, as part of a concerted conservative push against choice.

According to the Guttmacher Institute, which provided the data for the animation, more restrictions have been placed on abortion over the past three years than in the entire decade prior. Here’s another take on what that looks like:

If it seems like there’s a “war on women” — or, put another way, a dedicated effort to deny women access to safe and reliable abortions and contraception — that may well be because there is.

The above charts demonstrate why, in recent years, our discourse has turned toward mandatory transvaginal ultrasounds, "legitimate rape," and the horrifying plight of Texan Marlise Munoz, who is just now being laid to rest. There's a reason why Wendy Davis' filibuster had to happen, and why it resonated so deeply with so many people. After all, to paraphrase Davis, legislation like H.R. 7 undermines the hard work and commitment of fair-minded mainstream individuals who want nothing more than to work hard, raise their children, stay healthy, and be productive.

The takeaway: According to Representative Cathy McMorris Rodgers, who delivered the official Republican rebuttal to the president’s State of the Union address, her party’s vision is, “one that empowers you, not the government. It’s one … that trusts people to make their own decisions, not a government that decides for you.” That sounds great, but it would be a little easier to believe if McMorris Rodgers hadn’t joined her conservative colleagues in passing H.R. 7 in an all-but-party-line vote earlier in the same day.

Hopefully, now that H.R. 7 has passed, House conservatives can actually, in McMorris Rodgers' words, "focus on jobs first," rather than showcasing bills that stand no chance of becoming a law, and which wouldn’t change the status quo if they did. After all, we could all stand to benefit from a House G.O.P. that spends the rest of the year dedicated to creating jobs and opportunity, rather than wasting its time symbolically chipping away at women's ability to seek medical care.