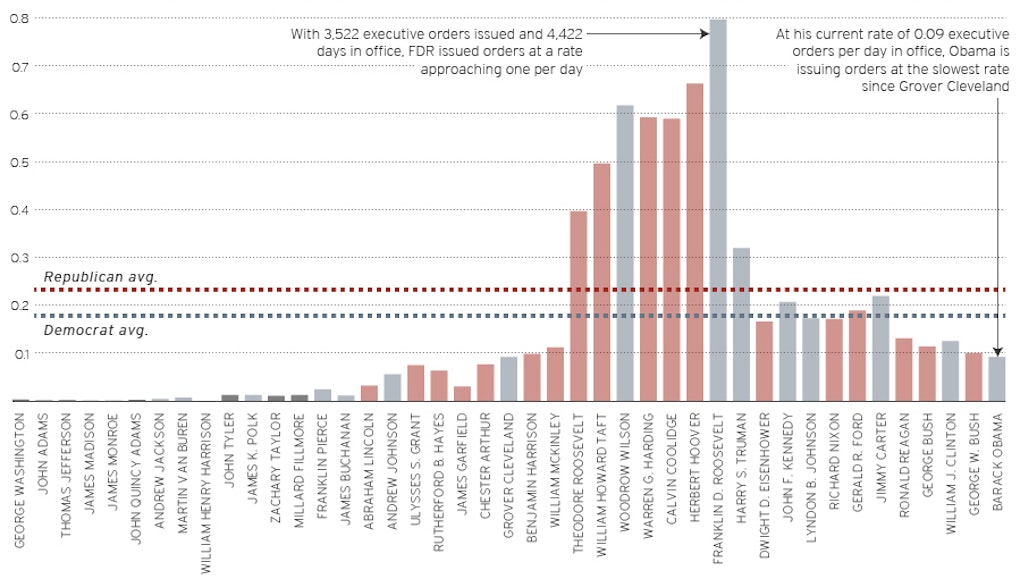 Which President Has Bypassed Congress the Most in U.S. History? Definitely Not Obama

During Tuesday’s State of the Union address, President Barack Obama raised eyebrows when he stated that though he hopes to spend 2014 working with Congress to increase growth and opportunity, “wherever and whenever I can take steps without legislation to expand opportunity for more American families, that’s what I’m going to do.” In short, the president pledged to continue his controversial rule by executive order.

Conservative leaders and news outlets were taken aback by the president’s words. Senator Ted Cruz penned a Wall Street Journal editorial that opens by accusing the president of a “persistent pattern of lawlessness” and enforcing policies “via executive fiat.” Senator John McCain described Obama as abusing “the intent of the Constitution,” and vowed to take the president to court. However, before he begins speed dialing lawyers, McCain may want to take a glimpse at the following graph.

Created by Christopher Ingraham, a data visualizer for the Brookings Institution, the graph shows the rate at which United States presidents have issued executive orders, going all the way back to George Washington. (While executive orders aren’t specifically authorized by the Constitution, they almost date back to it; Washington’s first came a mere five weeks after his swearing in.) Ingraham’s work makes it clear that Obama is hardly a tyrant blasting out executive orders with reckless abandon.

In fact, he’s resorted to executive orders with less frequency than any president since the 19th century.

Despite president and birthday boy Franklin Delano Roosevelt’s flurry of orders establishing the New Deal, Republican presidents have, on average, been more reliant on executive orders than have their Democratic counterparts. In fact, it wasn’t too long ago that Democrats were lamenting a certain Republican president’s use of executive orders to green light the CIA’s torture of detainees and constrain stem cell research.

It’s almost as if both Republicans and Democrats would be happier if we had a different, less unilateral way to enact rules. Perhaps a system by which both parties could propose, debate, and enact legislation.

That’s where a second chart by Ingraham comes in.

Based on the Brookings Institution’s Vital Statistics on Congress reports, the serpentine charts show how productivity in both the House and Senate has plummeted since the mid-20th century as ideological differences between Republicans and Democrats have widened. The 113th Congress is, famously, the least productive in history, having enacted only 78 laws to date, just 1% of those that have come before it, and reached such an impasse that they shut the government down.

It would be delightful if, rather than continuing to tackle irrelevant legislation for the sole purpose of grandstanding or dodging votes entirely, both the House and the Senate committed to making 2014 a year in which they tackled the economic growth and jobs programs to which they pay lip service. Maybe, if Congress leads by example, we can continue to turn away from executive orders, and toward the system of checks and balances in which Cruz and McCain profess to believe.