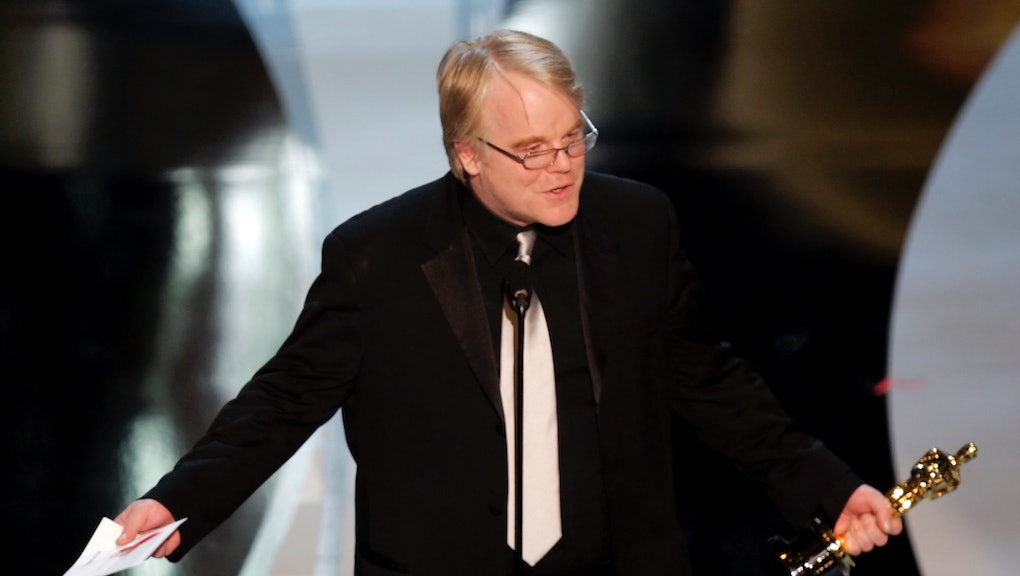 Philip Seymour Hoffman's tragic death yesterday from an apparent drug overdose was a devastating loss for the film world. Hoffman has always been praised for the emotional depth of his acting, and his ability to portray a variety of characters with such sincerity was consistent with his real life persona.

At the 2006 Academy Awards, Hoffman won Best Actor for his performance as the title character in Capote. It was a tough year for the category, with Joaquin Phoenix, Terrence Howard and — poignantly — Heath Ledger in the running. But Hoffman's remarkable performance got him the win.

In his acceptance speech, Hoffman speaks to his inner earnestness. Immediately, he acknowledges the other actors in the category before moving on to give the perfunctory thank-yous and tossing in a Van Morrison reference. But then Hoffman makes an unusual and moving turn.

Hoffman says, "My mom's name is Marilyn O'Connor and she's here tonight, and I'd like if you see her tonight to congratulate her, because she brought up four kids alone and she deserves a congratulations for that."

Hoffman continues to praise his mother, noting what she did to influence his life. Rather than accept the award for himself, or speak about the film or a bigger theme, Hoffman simply spoke about his mother.

Hoffman's brilliance came from his ability to make even the simplest lines carry huge emotional weight, and this speech demonstrates that ability even further. The speech is moving in its minimalism, as Hoffman illustrates what his mother did for him through small examples like, "She stayed up with me to watch the NCAA Final Four." Not only was he a gifted performer, but Hoffman was a sincere individual as well, as his acceptance speech proves. He closes with a simple and selfless message: "Be proud, Mom, because I'm proud of you."