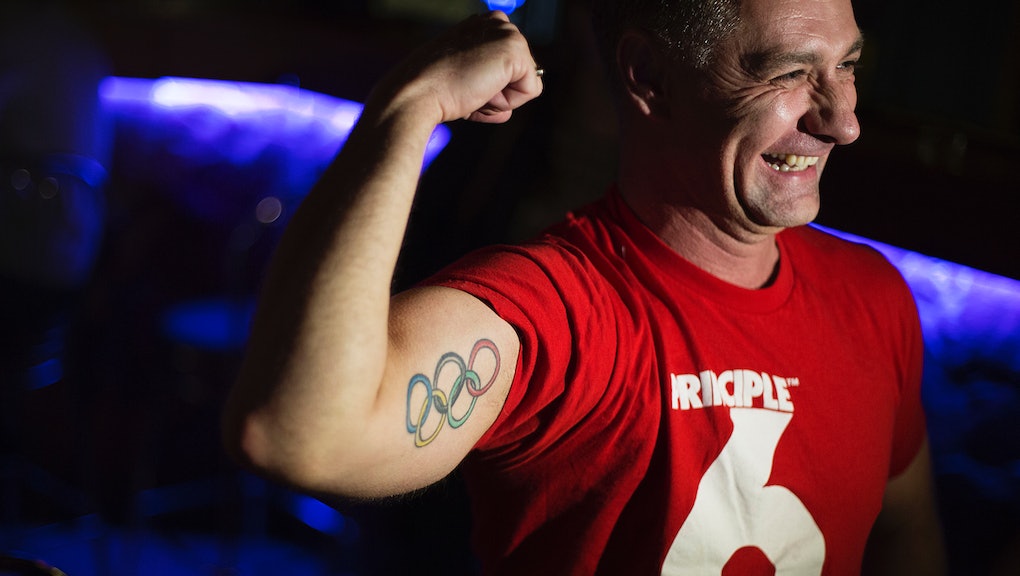 Are you enjoying the Winter Olympics but depressed by Putin's homophobic antics? There's hope. Many organizations and groups are determined to give Russia's LGBT community a voice and spread their stories. Instead of watching passively, they've taken action. Take a look at what they're up to, and find out how you can take a stand for equality against Russia.

With celebrities like Julianne Moore, Russell Simmons, Aisha Tyler and Alexander Wang joining the movement, you've probably seen the #P6 hashtag pop up on your social networks. That's because of Athlete Ally and All Out's Principle 6 campaign, whose mission is to allow athletes and supporters of the LGBT community to speak out against discrimination during the Olympics. Visit their website to find out how you can sign their online petition, change your Facebook profile and cover photo as well as learn more about the changes they are making in the world.

2. Blondie refused to play in Russia in the name of human rights.

The lead singer of Blondie posted this amazing picture on Instagram with the hashtag #pass4humanrights after rejecting a lucrative offer to play as part of Russia's Olympic Games. Go Blondie!

3. Thanks to the Human Rights Campaign, love will conquer hate.

Post your own picture using the #LoveConquersHate hashtag to make sure NBC dedicates its Olympic coverage to Russia's anti-gay law. The Human Rights Campaign is behind the digital campaign. It's tracking all the coverage and pressuring the network to inform its viewers about the "gay propaganda" law. Check them out on Facebook and upload your own!

Many people were upset when Olympic sponsors like McDonalds refused to take a stand against Russia's tyrannical anti-gay crusade. So when the company launched a hashtag to get people excited about the beginning of the games, advocates used it to call attention to the country's brutal anti-gay policies. For more, you can check out GLAAD's coverage of the digital protest.

5. Google stood up for LGBT rights.

The company isn't an Olympic sponsor, but that hasn't stopped them from making a bold statement against Russia's anti-gay laws. According to USA Today, Google refused to comment on its doodle, claiming "it wanted the illustration to speak for itself." Judging from the written text below the doodle, its intention is clear:

"The practice of sport is a human right. Every individual must have the possibility of practicing sport, without discrimination of any kind."

6. The Canadian Institute of Diversity and Inclusion showed us that the Olympics "have always been a little gay."

If you didn't know about the Canadian Institute of Diversity and Inclusion, you do now. They produced an amazing video that sums up Honey Boo Boo's argument, "Everyone's a little gay."

In a statement released on Friday, the company publicly condemned Russia for its "gay propaganda" law.

"AT&T has a long and proud history of support for the LGBT community in the United States and everywhere around the world where we do business. We support LGBT equality globally and we condemn violence, discrimination and harassment targeted against LGBT individuals everywhere. Russia's law is harmful to LGBT individuals and families, and it's harmful to a diverse society," the company's statement reads.

8. Cher refused to perform at the Sochi Olympics opening ceremony.

In an interview with Maclean's magazine, the singer admitted to "immediately" refusing an invitation to participate in the Winter Olympics opening ceremony. Why? Because she couldn't stand the country's treatment of the LGBT community.

Visit the Russian LGBT Network's Facebook page to stay up-to-date on the latest ways to get involved.

10. Lush cosmetics will launch its own petition book made up of your selfies.

Sick of Russia's intolerance towards LGBT people? Lush Cosmetics hears you. On Feb. 14, the cosmetic company will launch their We Believe in Love campaign encouraging users to draw a pink triangle on their body and post a selfie using the hashtag #SignOfLove to show their support for the gay community in Russia.

11. Russian activists detained by police are using social media to report their experience.

Anastasia Smirnova, an active member of an LGBT advocacy organization in Russia, is among the activists arrested and detained by the government. According to GLAAD, she's been vocal on social media, but has received little attention from mainstream outlets. She's been using her Facebook page as a way share how she was arrested and how the state is using the Sochi Olympics to crack down on protesters.

"The Olympic Games have already brought extreme, almost unprecedented mobilization of the police and other security forces even in regions far away from Sochi. What is more, they seem to shut down even the previously existing loopholes to peacefully assemble and to take civic action. While the Russian law on 'public assembly' is extremely harsh and presents high barriers for organizing public actions, there have always been small windows of opportunity to peacefully express opinions in public," she writes.

You can read it in full here.

The Pride House in Manchester is organizing many events from Feb. 7 to Feb. 23 to protest Russia's anti-gay laws. Join them by finding information on their Facebook page, or by taking a look at their website. They already organized a successful Same-Sex-Hand-Holding Initiative, which launched in August. Keep your eyes peeled for more events.

13. The Fair Games Project and Athlete Ally teamed up to create this powerful video.

This video was created by The Fair Games Project with funds raised with indiegogo.com. It is meant to serve as a catalyst for dialogue and a gesture of support for Athlete Ally, LGBT advocates in Russia, and the Russia Freedom Fund.

Following the Russian president's comments in which he compared homophobia to pedophilia, Elton John penned a letter in which he laid out what he saw during his last visit to Russia in December 2013.

"The people I met in Moscow — gay men and lesbians in their 20's, 30's and 40's — told me stories about receiving threats from vigilante groups who would 'cure' them of homosexuality by dousing them with urine or beating them up," John writes. "One young man was stalked outside a gay club by someone posing as a taxi driver who tried to garrotte him with a guitar string because he was a 'sodomite.' Everyone shared stories of verbal and physical abuse — at work, in bars and restaurants or in the street — since the legislation came into force last June. And, some of the vital work providing HIV prevention information to the gay community has been labelled 'homosexual propaganda' and shut down," John writes.

He ended his address by letting Putin know that he'd love to meet and discuss this further. There has been no word on whether Putin has accepted his offer.

15. Russian activists like Pavel Lebedev are ready to put their lives on the line.

After unravelling a pride flag during the torch relay, activist Pavel Lebedev was arrested and detained, but that didn't stop him from continuing to tirelessly fight for the rights of the LGBT community. Check out his full interview with GLAAD where he details his passion for activism and social justice.

16. GLSEN wrote a powerful op-ed reminding us that America is no better than Russia.

Eliza Byard, the executive director of the Gay, Lesbian & Straight Education Network (GLSEN) wrote a powerful op-ed reporting on how human rights atrocities in Russia aren't too different from what happens right under our noses in America.

"Imagine living in a country where you are prohibited from discussing homosexuality because it would be a negative influence on children. Imagine, then, that the schools are prohibited from including instruction on the 'homosexual lifestyle' or from portraying 'homosexuality as a positive alternate lifestyle.' Or a place where efforts to foster respect for LGBT people are denounced as 'pure evil' that 'should be declared child abuse.' Or a place where some schools ban teachers from mentioning the word 'gay' in lessons and student interactions.

You can read the whole piece here.

In order to make sure that the voices of LGBT people in Russia make it to the mainstream, GLAAD has compiled a helpful playbook for journalists outlining what's happening on the ground. Know a reporter? Send it over!

18. 'Uprising of Love' is putting pressure on Russia to build a safer world for the LGBT community.

Uprising of Love is a movement that aims to help LGBT individuals living in Russia while raising awareness among the international community about the anti-gay law. The effort is led by singer-songwriter Melissa Ethridge and has received tons of support. Celebrities like Lance Bass, Cindy Lauper, James Franco and Madonna have pledged to spread their messages of love to Russia. To learn more about how to make a difference, find them on Tumblr.

19. Wipe Out homophobia will be posting pictures of LGBT activists who aren't wanted in Russia

Keep an eye out for Wipe Out Homophobia's Facebook and Twitter accounts, which will regularly post pictures of gay athletes and LGBT commentators "not welcome in Russia." In an email, the organization vowed to post anything that "makes Putin look like a moron too." Something tells me that shouldn't be hard to do.

How will you be showing your support for the LGBT community in Russia? Let me know on Twitter and Facebook.